Overwatch Snipers are support units often used to provide suppresing fire against multiple resistence units. They can be identified by the blue laser pointers that are emitted from their sniper rifles. 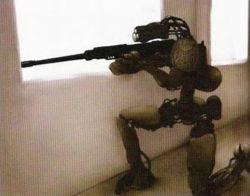 Snipers can often be found inside fortified areas called sniper nests by the Resistence. A small amount of nested Snipers can turn a winning battle for the Resistence into an overkill for the Combine. Not only are they powerful, but their reputation as ruthless killers has soldiers running in fear the second that blue laser apears. Apparently, the only way to get rid of a nested sniper is to either shoot inside it's nest with an explosive, or enter the nest and kill the sniper from inside.

Ranged Familiarity (Class Feature)At 1st level a sniper gains a familiarity with ranged weapons that grants him an unnamed bonus equal to 1/2 his class level rounded up against ranged attacks.

Deadeye (Class Feature)At third level and every 3 levels afterwards, a sniper gains a +1 bonus to damage rolls with ranged weapons.

Sniper Nest (Ex) A Overwatch sniper can be found inside a heavily fortified "Nest", usually a window or a rooftop. The Sniper cannot be hit by weapons inside this nest. Only a grenade thrown directly inside the nest or a rocket shot inside the nest will damage a sniper from the outside. If you can get into the nest and kill the Sniper from the inside too.