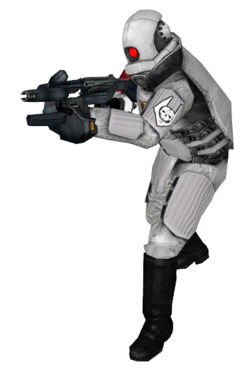 Overwatch Elite are the best of the best in terms of the Overwatch Soldiers. Their combat armor takes the heat for them while they dish out huge amounts of damage with their Pulse Rifles, using its secondary fire mode to launch incinerating Dark Energy orbs. They can command Overwatch Soldiers and grant them moral bonuses while still charging into the front line. Resistance members will run in fear from them if charged, although they are usually outrun and killed anyways.

As a full-round action, the Elite provides tactical aid to all of his allies (including himself) within sight and voice range of his position. This use of tactical aid requires an action point. This aid provides a +1 competence bonus on attack rolls. The bonus lasts for a number of rounds equal to one-half of the Soldier’s level in the advanced class, rounded down.

An Overwatch Elite can fire an Energy Orb from their Pulse Rifle. See AR2 Pulse Rifle for more information.

By providing supervision and guidance, an Elite can improve an ally’s chances of succeeding at a skill check. Instead of making a skill check to aid another, the Elite makes a Diplomacy check (DC 10). He cannot take 10 or take 20 on the check. Success grants a competence bonus on the ally’s skill check equal to the Elite's Charisma bonus or Reputation bonus, whichever is greater. The ally must be within sight and hearing distance of the Elite and must be able to understand him.

An Elite cannot use this ability on himself.