We were here when the end gave way to your beginning. And we will be here for your end as well. 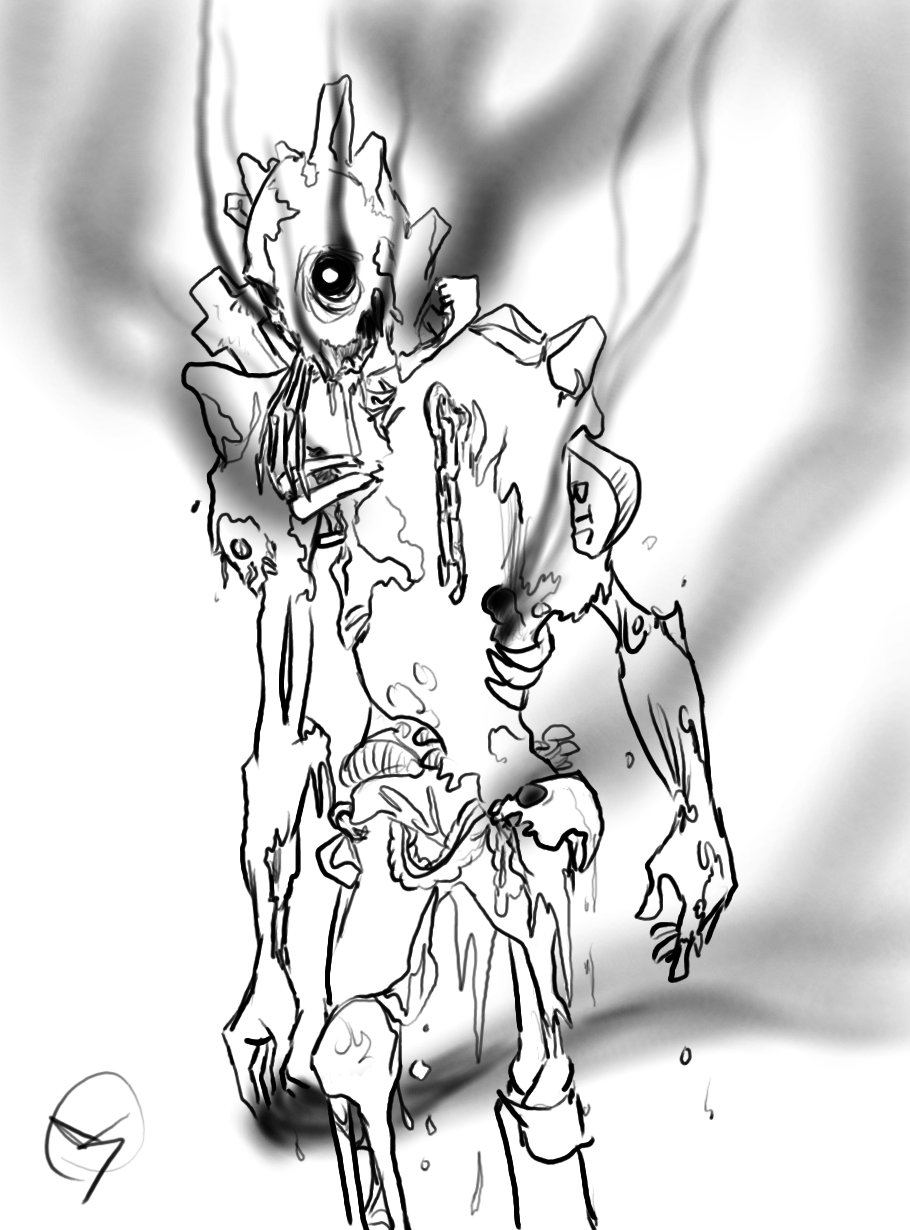 The omegaunts are elementals who embody the element of pervasive death. Thus, their body tends to be very dark colored. Unlike regular elementals, however, omegaunts are much more solid than, say, the usual elementals of ethereal air, water or fire. Their forms can be considered a mix of aspects of the shadow elementals and the necromentals. They have a vaguely humanoid form composed of a variety of necrotic matter, from spoiled earth and sludge, undead organic materials, and shadowy smog which issues forth from the crevices of their bodies.

Omegaunts are intelligent creatures and claim witness to the ends of many great empires. Their name partially comes from "omega," or, the end. This is because they are also known to spawn naturally even without the intervention of shadow creatures. The necrotic element is constantly active where there is life, for there must be death. Therefore, for as long as living creatures have died, the omegaunts have existed. This also explains why they are native to the Material Realm, where life is aplenty. They do not spawn from deaths of fiends, celestials, elementals, undead, or constructs however. People historically thought them to be some kind of grave robber since they frequent locations in the Material Realm where necrotic energies are at their most concentrated.

Omegaunts gather in groups called rings. They can convene and share information silently via transference of their shadow smog, which is a form of telepathy. Their groups lack hierarchy and are loosely self governed. Due to the occasional witch hunt, omegaunts never settle and are usually on the move. They frequent areas of great death and loss, like graves, battlefields, and treacherous terrains, from deserts, to frigid alpines. Omegaunts have been spotted dwelling in the Underdark, and some are known to be servile to deep dragons. They are known to be able to reproduce by sharing their necrotic material and molding it onto the necessary materials. As they are usually despised by the living, and draw suspicion from even the outcasts of society, they usually keep to themselves. They are not very fond of undead or constructs, yet it is ironically mainly these two racial types which do not mind their reputation nor presence.

As creatures of necrotic filth, as celestials have called them, omegaunts have a tendency to be somewhat ill-minded. They, however, never go out of their way to harm others unless absolutely necessary, like in life-or-death combat. They are content watching people fall on their own swords or get crushed by their own egos, letting fate take its course. Most of them therefore are non-interventionists, believing it is their duty and fate to outlast everything and witness their inevitable ends. They are not fully living creatures, as they are technically made of death and a material which leeches life. This makes some of them scornful of those who bear "true life." However, most of them acknowledge the importance of life and death like an endless dancing cycle. They spurn the undead and constructs usually as "unnatural."

Omegaunts have names that end up sounding a bit ominous or demonic usually.

Elementals of necrotic stuffs
Ability Score Increase. Your Charisma score increases by 2 and your Constitution score increases by 1.
Age. You were created fully formed, and do not age, nor die of age.
Alignment. Omegaunts are born of the shadows and darkness of the world, making them tend towards evil. However, a good deal of them are either neutral or lawful to not act out of instinct.
Size. Your size is Medium
Speed. Your base walking speed is 30 feet.
Darkvision. You can see in dim light within 60 feet of you as if it were bright light, and in darkness as if it were dim light. You can't discern color in darkness, only shades of gray.
Necrotic Body. Being made of necrotic stuff yourself, you are resistant to necrotic damage. The light harms your shadowy body however, and so you are vulnerable to radiant damage.
Insidious. You don't scare or fall for follies easily due to how you are wired in death. You have advantage on saving throws against being charmed or frightened.
Undead Elemental. Your creature type is both undead and elemental. As such, you are immune to the effect of some spells such as charm person or crown of madness as they target specifically humanoids. You do not need to eat, drink, sleep, or breathe, though you may do so if you wish.
Consuming Touch. Like a shadow can drain life and happiness, so can you. As an action you make an attack roll against a creature within 5 feet of you to touch them. On a successful hit, the target takes necrotic damage equal to 1d8 + your Charisma modifier, and you regain hit points equal to the amount of damage dealt. You cannot regain hit points over your hit point maximum. You must finish a short or long rest after using this trait to use it again.
Languages. You can speak, read and write Common.