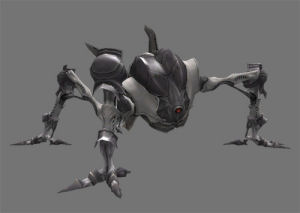 The ground beneath your feet shudders as you see what appears to be an enormous, four-legged metal spider. A beam of red light is projected from its head and scans the area. As soon as the light falls upon you, the machine whirls, lashing out with one of its thick legs as a beam of energy shoots from its single, aperture-like eye...

The Omega Weapon is a artifact from before space, before time and before the gods. It is an incredibly ancient and advanced machine, incredibly heavily armed and self-aware its capacity for destruction is unmatched save for the power of the god's themselves. Its purpose remains a mystery, although many suspect that it was built to guard the ruins in which it now sleeps. The Omega Weapon resembles a colossal silver spider with four legs, made out of an near indestructible substance known only as Uru. Its head is dominated by a single aperture, which functions as both a sensory object and a weapon. The machine's legs are dotted with numerous energy projectors, and its taloned feet are capable of crushing a primal earth elemental with ludicrous ease.

The Omega Weapon measures 40 ft in all directions when standing in an upright position, and its legs have an amazing reach. It weighs approximately 170 tonnes.

The Omega Weapon cannot speak but can understand all forms of written, verbal and telepathic communication although it does not react in any way.

The Omega Weapon moves slowly, blasting single, tough opponents with its light pillar or destroying vast groups of enemies with its Wave Cannon. When closing on an enemy, it brings its massive claws to bear to crush its adversaries.

Light Pillar (Su): A thin sliver of searing light pierces the clouds and strikes the target with unnerving accuracy. This attack can strike any location on the same plane as the omega weapon and deals 100d6 damage although success on a Reflex save (DC 71) reduces damage by half. However, this attack's extreme precision effectively negates the effects of the evasion and improved evasion feats. In addition, if the target fails its save it is blinded permanently if within 500 miles of the attack's origin or for a number of minutes equal to (200 - its Constitution modifier) and then dazzled for the next 2d10 days.

Wave Cannon (Su): When faced with numerous enemies the Omega Weapon's eye will glow before it releases a barrage of gravity waves creating a 70ft long cone dealing 50d6 damage and slowing any creature caught within its radius for 5d20 rounds - the affected creature's Constitution modifier. A Fortitude save (DC 71) halves the damage and negate the slow effect.