Spiders of the ancient forest just to the northeast of the Winter River. These spiders are known for tracking down their prey and pursuing them without yield. There are many species of them, but the most hostile are also the most prominent.

A strong defensive infantry for the spiders, able to take many hits, although very susceptible to different tactics and attack. It carries an egg sac on its thorax which bursts upon death. 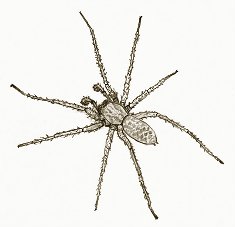 A spider used mainly for utilitarian purposes, domesticated for hauling loads of timber and other objects, they generally have their poison glands removed. These spiders however have been bred and raised to kill. Their venomous bites are known to paralyze their victims.

These spiders generally fight in small groups, trapping their pray in the denser parts of the forest. Old Forest Spiders take a sophisticated approach to fighting, assigning different designations for different members of their groups.

A character knows the following information with a successful nature check.

DC Nature 10: The spiders tactics are surprisingly sophisticated, despite their low intellects.

DC Nature 17: The spiders seem to emanate from an unknown source near the heart of forest.

DC Nature 21: Inability to understand advanced logic and reasoning would suggest that these monsters are gaining their knowledge and orders from elsewhere.