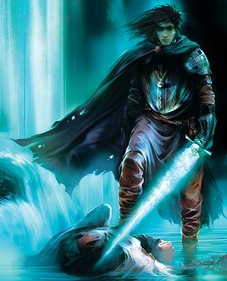 A mystic blade is an arcane spellcaster who has simultaneously adopted the way of the warrior. He is capable in combat as well as casting.

The mystic blade is usually a front-line combatant, and his spells supplement him to suit this purpose. He also gains the ability to imbue his weapons with magical energy that he siphons from the deepest recesses of his soul.

Abilities: As a melee combatant, Strength and Constitution are both valuable to aid in the mystic blade's survival. Depending upon his preferred armament, Dexterity could be equally as important. But Intelligence is perhaps his most pivotal stat because it defines the mystic blade's strengths and limitations as an arcane spellcaster.

Races: Charon, with their versatile nature make natural mystic blades. Okeanos, with their links to magic and swordplay, can also reap the maximum benefits of being a mystic blade. Kreison tend to spurn the arcane arts.

All of the following are class features of the Mystic Blade.

Weapon and Armor Proficiency: A mystic blade is automatically proficient with simple and martial weapons, all forms of armor, and shields.

A mystic blade prepares and regains spells in the same fashion as a wizard. Because he possesses a spellbook like a wizard does, the mystic blade may take the Spell Mastery feat as though he were a wizard.

Bonus Feats: A mystic blade is an extremely multitalented individual, able to take a bonus feat for which he meets the prerequisites at 3rd level and every four levels thereafter.

Spontaneous Metamagic (Sp): At 4th level and every four levels afterwards, the mystic blade can choose a metamagic feat for which he meets the prerequisites. Each time he chooses a metamagic feat, he gains the ability to apply this feat to a spell once per day without increasing the spell’s level and without any special preparation. This ability does not interfere with the Sudden metamagic feats presented in the Complete Arcane. This ability can only be used with a metamagic feat that would normally increase the spells level by no more than four spell levels.

For example, a 15th level mystic blade fighting a red dragon may further enhance his weapon with a +3 bonus. On the other hand, he could instead imbue it with the dragon bane and frost enchantments in order to better combat the dragon.

Touch of Steel (Sp): At 6th level, the mystic blade gains the ability to channel touch spells through his weapon. Any touch spell the mystic blade can cast can now be channeled through a single melee attack, which is made in place of the melee touch attack as part of the spell. This attack is rolled as a normal attack roll, not as a melee touch attack. If it hits, however, the attack deals normal weapon damage as well as the effect of the touch spell.

Channel Spell (Sp): As he gains arcane power, the mystic blade becomes better able to combine sorcery and steel. At 12th level he can channel any spell he can cast into his melee weapon. Using this ability requires a move action, and the mystic blade uses up the prepared spell as if he had cast it. The channeled spell affects the next target that the mystic blade successfully attacks with his weapon (saving throws and spell resistance still apply). Even if the spell normally affects an area or is a ray, it affects only the target. Once the spell is discharged from the weapon, it can then hold another spell. A mystic blade can channel his spells into only one weapon at a time. Spells channeled into a weapon are lost if not used in 8 hours. The mystic blade can channel up to three spells into his weapon per day at level 12, and he gains an additional daily use at every even-numbered level from then on.

Multiple Channel Spell (Sp): A 17th level mystic blade can now channel two spells into his melee weapon using a move action to channel each one. Both channeled spells affect the next target the spellsword successfully attacks with his weapon, in the order the spells were imbued into the weapon. As with channel spell, saving throws and spell resistance apply normally. Each time a spellsword uses multiple channel spell, he expends two daily uses of his channel spell ability.

Enhance Weapon (Su): The epic mystic blade continues to gain the ability to spontaneously enchant a melee weapon. The enhancement bonus that he may bestow upon his weapon(s) continues to increase every five levels.

Religion: Many mystic blades make their livings as dogs of war, and as a result their religous beliefs are infinitely variable. Some may go with the flow, others against it. Most might not care enough either way, for the only things that truly matter in their eyes are what they can do and what they can't.

Other Classes: Mystic blades get on well with wizards, for they find commonalities in their appreciation of arcane study. They also respect fighters, whose martial skills rival the mystic blades' own. Other classes are generally tolerated, but a particularly savage and unthinking character (a barbarian, for example) might draw the mystic blade's ire.

Combat: The mystic blade's greatest strength is his adaptability. While he does not possess the full spellcasting abilities of the sorcerer and wizard (or the sheer power of, say, a wish spell), his ability to cast effectively in armor and hold his own in melee allow him to find a niche in a party. His ability to bestow enchantments on his weapon also grants him a great deal of flexibility in combat.

Advancement: A mystic blade is already a well-rounded character complete with martial ability and limited but still formidable arcane casting ability. A muliclass to rogu would create a powerful blend of multiple approaches. In keeping with their versatility, a mystic blade can take levels in martial or arcane prestige class, depending on how the player wishes to progress.

Mystic Blades in the World[edit]

Daily Life: Mystic Blades do not like to sit around. They will often go exploring, and get themselves in sticky situations.

Notables: The first and perhaps most famous mystic blade was known as Forrixxion. His skills were beyond the ken of normal mystic blades, and by his death he had achieved a level of arcane power to rival the greatest of archmages. All mystic blades of any race or background can trace their lineage back to Forrixxion; whether this is mere jest or something more serious has yet to be determined by scholars.

Organizations: There is no official organization of mystic blades; they do, however, all share a kinship figuratively and in many cases literally, since all of them claim descendency from the same being. Mystic blades congregate annually at Forrixxion's unmarked gravesite on the anniversary of his passing; to miss this meeting is considered the greatest dishonor to other mystic blades.

NPC Reactions: Mystic blades are, in a word, eccentric. Each and every one of them has the uncanny ability to remember his or her exact relationship to Forrixxion, and somehow they all end up being blood brothers regardless of their parentage. Because their allegedly common ancestry has often been mistaken for worship (and because many mystic blades do swear on Forrixxion's name), many regard mystic blades as a cult of fanatical heathens.

Characters with ranks in Knowledge (arcana) can research Mystic Blades to learn more about them. When a character makes a skill check, read or paraphrase the following, including information from lower DCs.