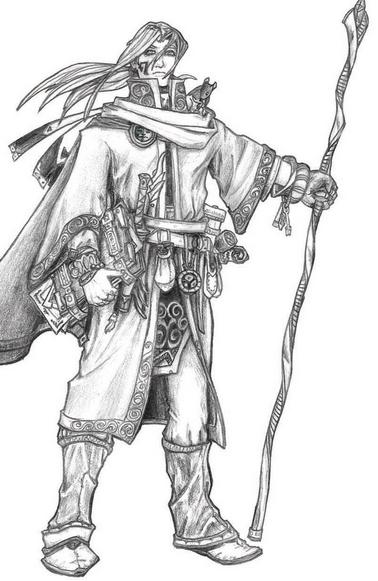 Master of the twin paths (MOTTPs)[edit]

A master of the twin paths has seen the power of his innate abilities that they was born with and has spent time learning to master it. With experience, they not only expand upon there ability to draw magic from their souls but can channel it into words, signs and script to render them with power.

All the following are class features of the Master of the twin paths:

Weapon and Armor Proficiency: Masters of the twin paths gain no proficiency with any weapon or armor.

Spells per Day: This prestige class may only be used in conjunction with a single prepared and a single spontaneous arcane spellcasting class. When a "Master of the twin paths" level is gained, the character gains new spells per day as if he had gained a level in both his prepared and spontaneous spellcasting classes. This is due to them gleaning information from new experiences.

New Feat: At 1st level, a MOTTPs gets a bonus magic-oriented feat in addition to any feat that any new level brings. The MOTTPs gains an additional bonus feat at 3th level and every 2 levels thereafter (1st, 3th, 5th, 7th, 9th, and 10th in total). These bonus feats must be for the progression of the arcane arts. A MOTTPs must still meet all prerequisites for a bonus feat, including ability score and other base needs.

Focus of the paths: With focus on the twin paths of the arcane, a MOTTPs may use his class level as normal or his combined levels of Wizard and Sorcerer as his class level for spells affected by this value (such as to overcome spell resistance and uses of dispel magic). Unfortunately to combine the power and levels of both, it takes more concentration and time. A DC (15+ spell level) must be overcome and the casting time becomes full round.

True mastery of the twin paths: At 10th level, the MOTTP's two spell lists integrate fully, becoming one spell list with the combined number of spell slots of both spell lists. He may henceforth use all his spell slots to prepare spells, and may also henceforth use all his spell slots to spontaneously convert to spells he knows from his spontaneous arcane spellcasting class. The spells per day for this mixed list also include any bonus spells/day from having exceeding ability scores.

The Epic Master of the twin paths[edit]

All the following are class features of the Epic Master of the twin paths.

Bonus Feats: The epic Master of the twin paths gains a bonus feat at 14th and every 2 levels after.

Masters of the twin paths in the World[edit]

MOTTPs are often sorcerers which have a scholarly outlook. They often developed sorcerer abilities as children to young adults, but had the mind to unlock arcane secrets through study. Without their natural sorcerer abilities they would have probably grown up to be accomplished wizards anyways. Having an innate sorcerous knowledge of magic is a great help to wizards. They have access to pools of mana untapped by studious castings and a boon to creating new spells as they have an innate ability form magic as they wish.

A MOTTPs usually spends there day in deep study or adventuring to find a muse to work from (being battle experience, rich libraries to scour, powerful allies or items of wonder)

There are no known organizations that deal specifically with MOTTPs. However in any major arcane institution it is possible to run across one.

Most MOTTPs believe in power of the arcane secrets over religion, the god of secrets being the Neutral evil Vecna and the True Neutral Boccob. Lesser gods worshipped include Delleb of lawful good standing.

Masters of the twin paths are rare to meet. NPCs with little knowledge of the arcane do not recognize them on site, whereas a knowledgeable scholar will recognize one on sight. Most reactions will be the same as any meeting of an arcane class.