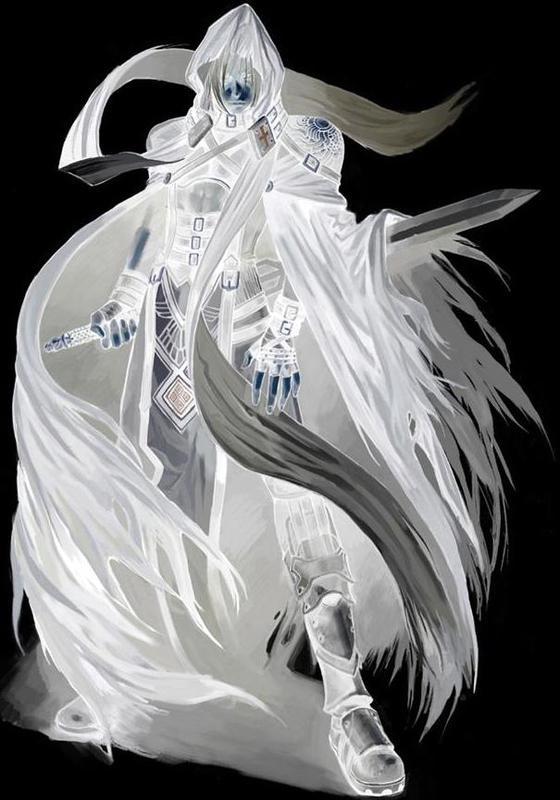 Merek Ill'sa was born into a powerful family. His father was the General of Armies for the aasimar people. His mother was the head priestess. When Merek began showing a powerful magical aptitude, his parents were overjoyed. They expected him to follow in his mothers footsteps, and become a cleric. However, he showed more interest in being a fighter, like his father. He joined the aasimar's Elite Guard when he came of age, however he promptly flunked out due to his build. He was only 6 and a half feet tall and weighed 150 lbs. Then, his parents decided that he should be trained as a cleric, because his interest in combat had failed. Merek Ill'sa, however, had other plans. He had learned from one of his friends about the limitless potential of the arcana. Merek began to experiment. Soon, he discovered his first illusion, and loved it. He began secretly working on expanding his power, and began to train as a sorcerer. When his parents sent him to the clergy, to be trained as a cleric, he reacted violently. He killed both of his parents, and burned the aasimar people's town to the ground. He ran to the nearby tiefling kingdom, seeking refuge. There, a powerful sorcerer took him under his wing, and completed his training.

His mentor taught him all manner of things, including a new method of producing quasi-real illusions. Merek was fascinated by this, and began to experiment. He still wanted to be a fighter, but was too weak. Thus, he created his first illusion weapon. His master was impressed, and helped Merek perfect the blade, and trained him more in illusions. Soon, his mentor asked an old soulknife friend of his known as Qe Kyano to help Merek with the combat training he would need. Merek, with the tutelage of the two powerful tieflings, flourished. Quickly, it became apparent that Merek had surpassed his mentor. His new skills were powerful, unlike anything anyone had seen. Merek's old mentor was the first of many to train in the arts of illusions with Merek Ill'sa. However, the aasimar people's king had heard news of Master Ill'sa's wereabouts in the Tiefling kingdom. They sent a message to the local tiefling lord, demanding that he turn over the traitor. The lord refused. Fed up with how the tiefling's responded to the aasimar people, within a single night of the refusal they declared war on their tiefling neighbors. During the fighting, Merek Ill'sa's mentors were slain.

Merek, fearing for his life, escaped and set out for the distant human nation. Along the way, he found an Eldritch Castle. There, he began training as one of their elite Eldritch Knights. After 5 years, he set back out for the human kingdoms. After 5 more years, he reached the land of Morteim. There, he found that the aasimar people had already contacted the humans, and that there was a 100,000 gp bounty for his head. Hunted by every bounty-hunter in Morteim, he realized that he needed a stronghold; a safe-haven. He searched, and found a hidden valley in the nearby land of Ravnira, a land renowned for sheltering those who cannot find shelter elsewhere. His immigration into Ravnira sparked the Second Morteim War, a war fought on two fronts; Morteim to the southwest, and the Aasimar to the northeast. There, in Ravnira, he set up a dimensional rift that lead to his castle and settled down, taking on students interested in the ways of illusions. After many years of study, he had even created an epic spell that only he could cast: Ill'sas Infinite Illusion. It makes quasi-real illusions that can mimic reality perfectly, making them impossible to disbelieve. In addition, it had an impossibly long range, and he can maintain an enormous amount of individual illusions with it that fulfills various functions in his dimensional castle and for his ever increasing goals and aspirations.

Master Ill'sa does not typically have to fight, as he does nothing but train those that come to him. He trains all manner of alignments, even chaotic evil pupils. The chaotic evil students almost always end up turning on him, as well as some from other alignments, and try to kill him. Therefore he never directly interacts with his students (or anyone else, for that matter), instead sending out quasi-real illusions of himself. The students never know of the deception until they manage to get a hit on "him", at which point the illusion dissipates, and the student is ejected from the castle. To the student, it appears as if the castle simply disappears and they are left, alone, in the valley. Pupils who continue to perform to his expectations, however, either become assistants to Master Ill'sa's ever increasing goals and aspirations, or at some point go their own way. If he actually has to enter combat, he fights much like Dale Beltre except that he acts much more like a normal arcane "blaster". He will use trickery and deception to trap his foes, and then blast them with spells like fireball and meteor swarm.