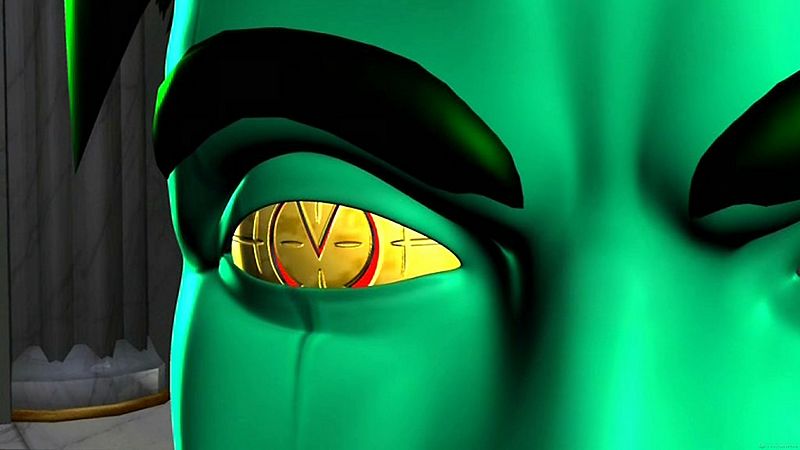 This mechanical object looks as if a Gnome attempted to install half a spyglass, a pocket watch, and very small but precious stones into the persons eye. Made of gold and platinum and adorned by diamond jewel lens, this is truly a luxury item for the blind.

Losing your eye is fairly easy in a world filled with battle, traps, and eye pokers. And for an archer, this can be detrimental. Gaining back your sight is still possible...if you have the coin for it. In the biggest cities you can find merchants of all kinds but to gain your sight back you must approach only the best Gnome mechanics and enchanters in the city. In order to gain your sight back and more, you must purchase a Marksmen’s Eye. These devices not only return your vision but also prevent further eye lose with the diamond hard lens and golden clockwork. A Gnome can build and install a Marksmen’s Eye within two days; the first day is spent on measurements and creating the components while the second day is spent installing the apparatus.Having a Marksmen’s Eye installed removes/replaces one eye and because it is a drastic effect on the character must make a Fortitude Save DC 15 or becomes insane and tries to kill everyone (becomes Chaotic Evil).

They Marksmen’s Eye gives the wearer the use of Darkvision 60’ as well as they gain the effects of a True Seeing Spell at a range of 120’. But the true power of the eye lies in its special power.

Mark Target(su): The wearer of the Marksmen’s Eye is able to “Mark” up to ten targets per round. This Functions much like the spell Arcane Mark, except that it is visible and appears as a crosshairs on the target. The target of the mark must be within visual ranges and unobstructed view. Anything that can be hit with a ranged attack can be marked in this fashion. The mark lasts for 24 hours. To maintain targeting on the makes the user must make a concentration check with the DC depending on the situation.