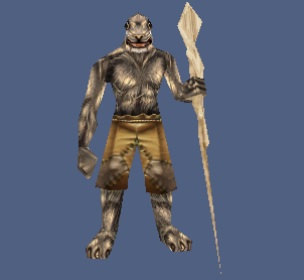 Madras usually goes into battle armed with his spirit staff, which comes from the wood of the trees in which he lives.

A Trynnie alchemist and weaponsmith, Madras is perhaps the most "humanized" of all Trynnies, despite being far from a human at heart. While he still has a Trynnie's mindset, he uses Trynnie and human technology and magic to advance the ends of his people. So far, this has worked out wonderfully, as combining human sophistication with the Trynnies' penchant for nature magic has enabled Madras to make valuable potions, weapons, and tools, most of which are hewn from wood and stone, as Trynnies have extremely limited skills with metal.

Born in the temple sanctuaries in which many Trynnies are raised, Madras showed an unusual interest in the outside world, far beyond the borders of his culture and race. While the Trynnies are known to trade with and steal from other races, few of them are interested the arts and skills of outsiders, as they are quietly convinced of the superiority of their native ways. While Madras was not exception to the belief in the superiority of his people's culture, he could not overlook the utility of the superior skills possessed by other races. Over time, his contacts with other races led to the first Trynnie spell scrolls, the most advanced alchemy laboratory ever seen in Trynton, the first telescope ever seen in Trynton, and perhaps most importantly, a growing interest in the technology of outsiders.

Unsurprisingly, Madras' acquisition of new magics and devices from the outside world has caused a backlash against him from some of the more conservative members of Trynnie society. While he has the blessing of the High Shaman and the Chief, there are those who wish to undo all contact with outsiders, and purge any element of their influence from Trynnie society, for fear that technological change will lead directly to cultural change. So far, this has not happened, as the amount of imported magic and devices are limited, those who use said imports are few in number, and the impact of such imports is quite narrow at this point.

Madras himself is very much unchanged in terms of culture, despite the things he has brought into his society from the world outside. Like all Trynnies, Madras has little concept of land ownership and a permanent mate. While he has a residence with laboratory to live in, it is only recognized as "his" in that he lives there; the residence is communal and just happens to have devices and tools that Madras uses. He is considered an attractive sire by female Trynnies, many of which hope that their offspring by him will have as much success as their father.

While primarily an artisan who works behind the lines, Madras can fight if necessary. His weapon and most prized possession is his Spirit Staff, which was cut from the sacred wood which makes up the trees which support the city of Trynton, capital city of the Trynnies. Permission to make a staff out of such wood is a rare privilege which has to come from the high shaman, and is never granted without very good reason. Madras was granted the right due to his unique skills among his kind, and the belief that those skills would be necessary in a changing world.

In a fight, Madras prefers to keep enemies at a range, using his magic to take down enemies. If forced into close combat, he tries to use his agility, dodging blows while swinging his Spirit Staff. He is fairly strong for a Trynnie, despite his status as a mage, although Trynnies are hardly known for their strength overall. Unlike most of his kind, he is quite intelligent. Combined with the traditional Trynnie strengths of dexterity, agility, and good senses, Madras can be a formidable opponent for one so small and unarmored.

Note: This character is an adaptation from the game Wizardry 8. No infringement is intended.