Jump to: navigation, search
This race has multiple design complexities, such as their Affinity and Detriment, their ability to swap into a human shell, and the use of Strength and Dexterity as spellcasting abilities. This race is, for all intensive purposes, fully functional and playable in a standard D&D setting; however, some users have complained about particular aspects of this race. 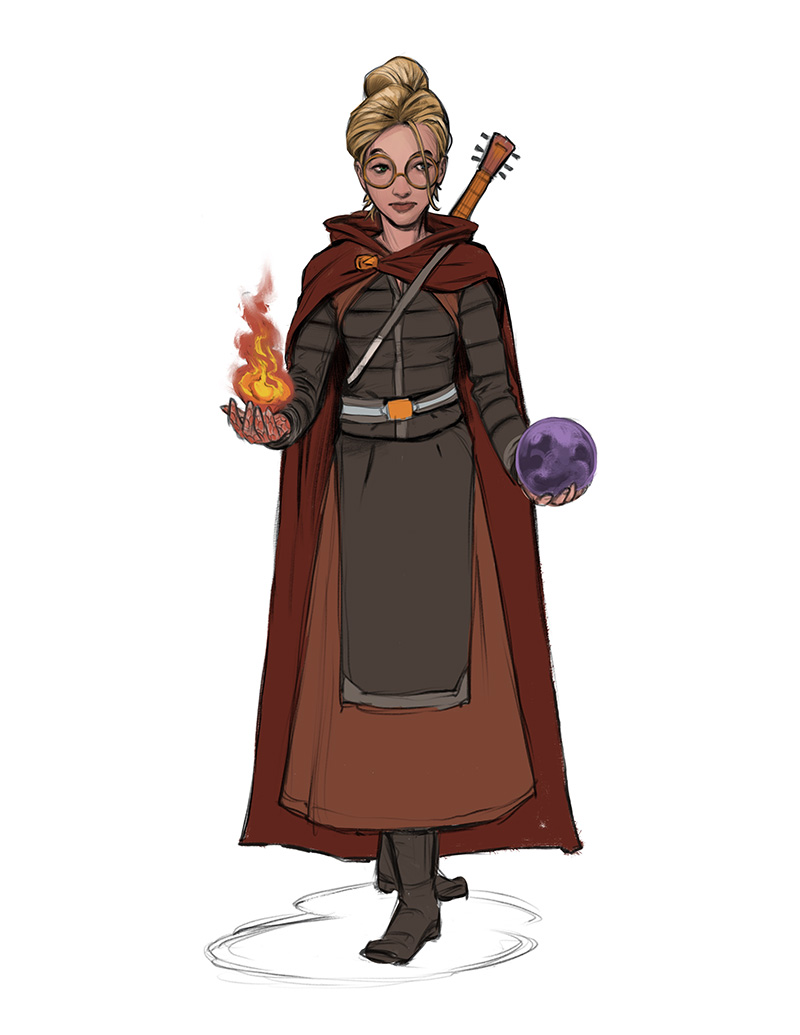 This fire lumate's right hand has began to switch into her lumate shell. Illustration by Andrew Bosley

Lumates are unusual in that they can resemble humans in what they call their "human shell," but they also have what is called a "lumate shell," which varies significantly from their human shell. Their human shell almost perfectly resembles a human form, though with a slightly broader spectrum in terms of physical features. The color of their human shell's skin ranges from almost pale white to deep brown; their eyes can be anywhere between white-blue to black, with shades of yellow, green, blue, purple, and gray thrown in, sometimes making beautiful colors like gold, amber, bronze, silver, hazel, or even pink; and their hair can be in almost every different shade of blonde, brown, red, or black. Apart from these minor variations, a lumate's human shell is practically indiscernible from an actual human, although with a slightly wider height range.

A lumate shell, however, is much more conspicuous than their human one. A lumate's human shell, while it appears at first glance to be made of normal skin, is actually constructed from thousands of flesh-colored scales. In human form, these scales look and even feel like human skin. When reverting between shells, however, a lumate's scales flip over, one by one, quickly revealing their true identity. When in their lumate shell, most of their other physical features remain the same: eye color, hair color, height, and even their facial features. The only difference is that their skin is now visibly constructed of metallic scales. The color of these scales primarily depends on an individual lumate's subrace. For example, a holy lumate has white or golden scales, while its detriment, a death lumate, has black or purple scales.

Lumates may seem to be extremely powerful, but they have one great drawback: water. If a lumate is completely submerged in water, he or she is slowly turned into gold, and eventually dies. Many particularly greedy people will kidnap lumates and drown them in water, hoping to become rich through selling their bodies as gold artwork.

Lumates have existed for millennia, almost as long as dragons; as a matter of fact, after deep magical study, it was found that the two races are distantly related. However, despite lumates' impressive longevity, nobody knows where they come from, not even their oldest wise men. It is known that lumates carry remarkable levels of magical ability, and one would be hard-pressed to find a lumate that does not use its ability as a wizard, cleric, or some other form of spellcaster.

Lumates are divided into six subraces: Holy, Death, Flame, Frost, Shock, and Quake. Despite the fact that certain subraces are opposing pairs, known as detriments (i.e. Flame and Frost), all six of them live happily in organized clans, and they all have fairly calm relations. This is for good reason; there were once two more subraces of lumates: Sound and Sickness, with affinities to thunder and poison damage, respectively. The two subraces were detriments to one another, holding deep animosity. One day, a sound lumate soldier killed one of the sickness lumate's clan leaders, and a violent war broke out. Naturally, being detriments, the two subraces could cause incredible harm to one another, and the entire war lasted only thirteen days. After it was over, the other six clans inspected the lands of the sound and sickness lumates, coming to a startling conclusion: there were no survivors. Both of the clans had wiped each other out. The six clans then formed a peace treaty, which would end any hatred between any two clans and prevent any other calamity on that scale. Ever since, the lumates have spread everywhere, but in spite of their internal and external differences, the lumates have been known as one of the most powerful yet peaceful races most creatures have ever met.

Although lumates as a group do not engage in war or battle, they do not oppose individuals leaving their respective tribes and participating in affairs outside their quiet culture. As a matter of fact, lumates that turn out to be famous heroes and warriors are often revered by members of their subrace. Lumates are known for their extreme magical ability, and many of them will find personal and professional lives within many other cultures, becoming famed sorcerers or celebrated bards. Lumates are also distantly related to dragons, which may explain their proficiency in magic, but they share much more of their physiology and ideals with humans. Lumates have their own language, Lumen, but it is written in the Common script, and the roots of several of their native words come from those of the Common language. Lumates also feel much more comfortable socializing with humans than any other races apart from their own, most likely due to their ability to take on a human-like form.

Lumates are also known for the interesting style in which they name their own kind. Rather than having a name for their child at birth, lumate parents will wait until the child is twenty years old (adulthood for lumates) before the child selects their own name. This results in lumates having names which reflect their true selves, rather than a name which they think of as impersonal or improper. In order to further prevent influence upon them, lumate children are given a psychic field from birth until adulthood. This field prevents a lumate from ever hearing the name of a living person, and also gives them the ability to recognize exactly when somebody is speaking to them, in spite of their not having a name. However, sometimes twenty years doesn't seem quite enough for a lumate to mature, as demonstrated by the infamous Emphatically Perfect In Creation, or E.P.I.C.

A race of unusual but friendly creatures that are sometimes human, and sometimes not.
Ability Score Increase. Your Wisdom or Constitution score increases by 2.
Age. Despite having lifespans of several centuries, lumates quickly become adults at the age of 20. Afterwards, they show no visible signs of aging until a few years before they die around the age of 700. Because of this, lumates can always tell when they are about to die, giving them ample time to put their affairs in order.
Alignment. Lumates usually carry their clan's code of conduct, and as such they usually shift towards lawful alignments. Part of this code is the extension of friendship, so lumates usually remain within the boundaries of good alignments.
Size. Lumates vary greatly in height and build, from barely 5 feet to almost 7 feet tall. Your size is Medium.
Speed. Your base walking speed is 30 feet.
Switch Shell. Whenever you are in your lumate shell, your armor class increases by 2. However, if you take at least 80 damage over any period of time while consistently in your lumate shell, you are forcibly switched back into your human shell for 8 consecutive hours in order to repair your scales.
Illumination. Lumates can generate a soft glow around their bodies, casting bright light for 15 feet and dim light for 15 feet. While doing so, you have disadvantage on stealth checks against creatures that can see. After using this ability for 4 hours, you must complete a short or long rest in order to use this trait again.
Affinity and Detriment. Lumates have what are called affinities and detriments, which are based on their subrace. An affinity is a damage type which a particular lumate will have resistance to when attacked, and has advantage on all attack rolls, checks, and saving throws to or against spells or attacks with that damage type. A detriment is a damage type which a particular lumate will have vulnerability to when attacked, and has disadvantage on all attack rolls, checks, and saving throws to or against spells or attacks with that damage type. Detriments also refer to a subrace which is opposite in terms of these abilities (e.g. your detriment is their affinity, and vice-versa).
Gold Transmutation. If a lumate is covered in water, they will slowly petrify into gold. Whenever you are submerged completely in water, you must make a DC 10 Constitution saving throw. On a fail, you gain 1 transmutation point (see the table below; this cannot exceed 4). On a success, you go 1 minute until you must make another Constitution saving throw. Each Constitution saving throw is 1d4 greater than the saving throw before it. When you are turned completely into gold, the process is reversible for the next 5 minutes; if you are completely removed from the water, you lose 1 transmutation point every minute until you are either restored to normal or submerged in water again. If after 5 minutes you have not been removed from the water, the process is irreversible unless through the use of a wish spell or a true resurrection spell. Your value as a gold statue is 365.62 gp multiplied by your weight (rounded up), plus 20 gp multiplied by 1d4 multiplied by your Charisma score (you are now a beautiful piece of artwork, after all).
Languages. You speak, read, and write Lumen (the language of the lumates), Common, and one other language of your choice.
Subrace. Holy Lumates, Death Lumates, Flame Lumates, Frost Lumates, Shock Lumates, and Quake Lumates.

Ability Score Increase. Your Charisma increases by 1.
Affinity. Your affinity is radiant damage.
Detriment. Your detriments are necrotic damage and death lumates.
Scale Colors. Your scales are typically white or yellow.
Sacred Flame. You can cast the sacred flame cantrip at will without using any of its verbal or somatic components. Your spellcasting ability for this cantrip (if you do not already have one) is Charisma.

Ability Score Increase. Your Intelligence increases by 1.
Affinity. Your affinity is necrotic damage.
Detriment. Your detriments are radiant damage and holy lumates.
Scale Colors. Your scales are typically black or purple.
Chill Touch. You can cast the chill touch cantrip at will without using any of its verbal or somatic components. Your spellcasting ability for this cantrip (if you do not already have one) is Intelligence.

Ability Score Increase. Your Wisdom increases by 1.
Affinity. Your affinity is fire damage.
Detriment. Your detriments are cold damage and frost lumates.
Scale Colors. Your scales are typically orange or red.
Produce Flame. You can cast the produce flame cantrip at will without using any of its verbal or somatic components. Your spellcasting ability for this cantrip (if you do not already have one) is Wisdom.

Ability Score Increase. Your Constitution increases by 1.
Affinity. Your affinity is cold damage.
Detriment. Your detriments are fire damage and flame lumates.
Scale Colors. Your scales are typically white or light blue.
Ray of Frost. You can cast the ray of frost cantrip at will without using any of its verbal or somatic components. Your spellcasting ability for this cantrip (if you do not already have one) is Constitution.

Ability Score Increase. Your Dexterity increases by 1.
Affinity. Your affinity is lightning damage.
Detriment. Your detriments are force damage and quake lumates.
Scale Colors. Your scales are typically brown or dark blue.
Shocking Grasp. You can cast the shocking grasp cantrip at will without using any of its verbal or somatic components. Your spellcasting ability for this cantrip (if you do not already have one) is Dexterity.

Ability Score Increase. Your Strength increases by 1.
Affinity. Your affinity is force damage.
Detriment. Your detriments are lightning damage and shock lumates.
Scale Colors. Your scales are typically gray or dark green.
Eldritch Blast. You can cast the eldritch blast cantrip at will without using any of its verbal or somatic components. Your spellcasting ability for this cantrip (if you do not already have one) is Strength.