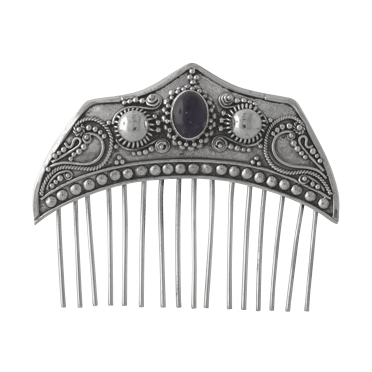 Loz'arke's Token: Loz'arke had this special comb crafted for his greatest love, Natsuki, Cleric of Pelor. He was concerned about her safety as they went exploring together, and also wanted her to have something to remind her of their love. When this comb is used to brush the owners hair, it bestow powerful protection upon the user. They gain the effects of the following spells for twenty four hours or until dispelled. After then enchantments were placed on the comb, Loz'arke went into deep prayer for 24 hours straight to the deity Pelor asking him to help protect his follower. He granted his request by granting the item the added effects of the spell Holy Aura.

Stoneskin: Spells give the user a resistance to blows, cuts, stabs, and slashes. The subject gains damage reduction 10/adamantine. (It ignores the first 10 points of damage each time it takes damage from a weapon, though an adamantine weapon bypasses the reduction.) Once the spell has prevented a total of 150 points of damage it is discharged.


Eagle's Splendor: The user grains a +4 enhancement bonus to Charisma, adding the usual benefits to Charisma-based skill checks and other uses of the Charisma modifier.


Owl’s Wisdom: The user becomes wiser. The spell grants a +4 enhancement bonus to Wisdom, adding the usual benefit to Wisdom-related skills. Clerics, druids, paladins, and rangers (and other Wisdom-based spellcasters) who receive owl’s wisdom do not gain any additional bonus spells for the increased Wisdom, but the save DCs for their spells increase.

Freedom of Movement: This spell enables you or a creature you touch to move and attack normally for the duration of the spell, even under the influence of magic that usually impedes movement, such as paralysis, solid fog, slow, and web. The subject automatically succeeds on any grapple check made to resist a grapple attempt, as well as on grapple checks or Escape Artist checks made to escape a grapple or a pin. The spell also allows the subject to move and attack normally while underwater, even with slashing weapons such as axes and swords or with bludgeoning weapons such as flails, hammers, and maces, provided that the weapon is wielded in the hand rather than hurled. The freedom of movement spell does not, however, allow water breathing.


Holy Aura: A brilliant divine radiance surrounds the subjects, protecting them from attacks, granting them resistance to spells cast by evil creatures, and causing evil creatures to become blinded when they strike the subjects. This abjuration has four effects. First, each warded creature gains a +4 deflection bonus to AC and a +4 resistance bonus on saves. Unlike protection from evil, this benefit applies against all attacks, not just against attacks by evil creatures. Second, each warded creature gains spell resistance 25 against evil spells and spells cast by evil creatures. Third, the abjuration blocks possession and mental influence, just as protection from evil does. Finally, if an evil creature succeeds on a melee attack against a warded creature, the offending attacker is blinded (Fortitude save negates, as blindness/deafness, but against holy aura’s save DC 22).