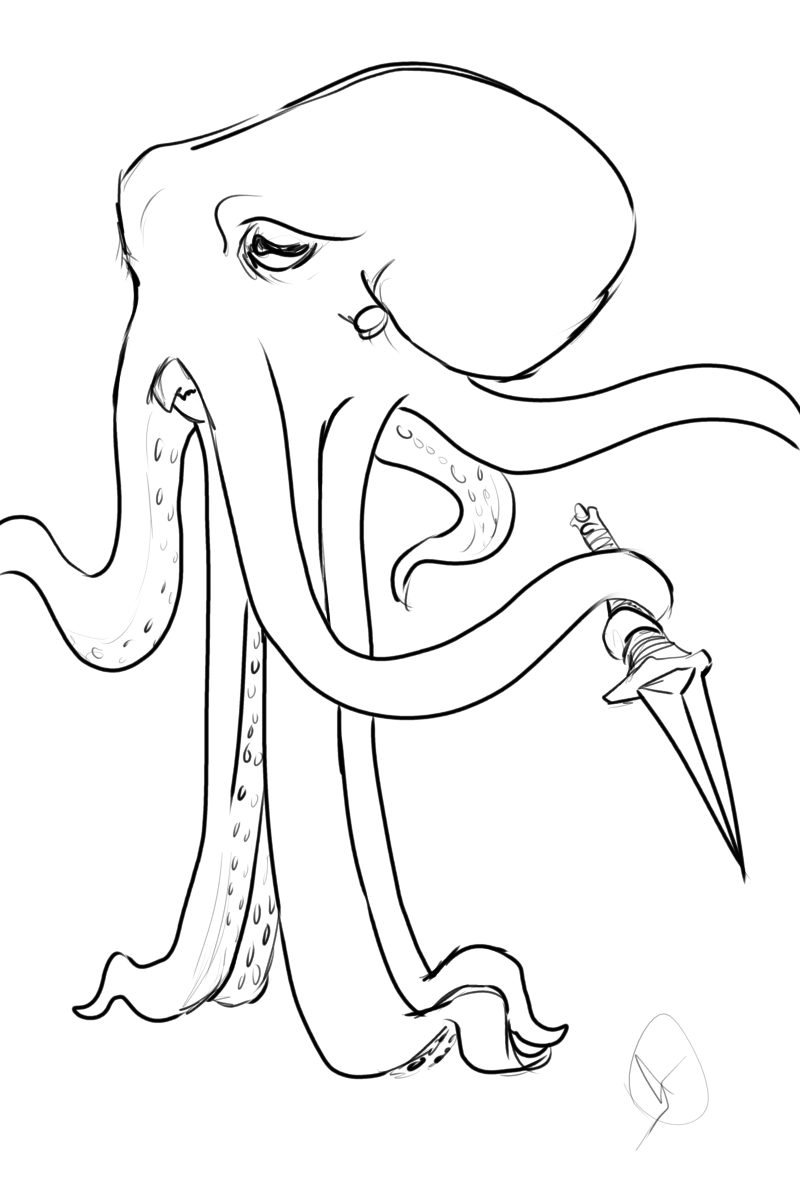 Amphibious hunters of the deep, their long life allows them to gain great knowledge, which is deadly when combined with their great strength and skill.

In the sunken city of the great octopus-faced god, his offspring wander the depths of the ocean. Their bulbous brains are not for show. Many a diver has seen them and they have seen the surface through their eyes in turn. The locra are an ancient race that developed when their god sank his city into the ocean to enter a deep slumber. They are curious to a deadly extent about these weird people who roam the earth above. One day, they will rise again and gain the knowledge they seek, through any means necessary.

Play a Locra if you want...

The bizarre appearance of locra is due in part to their ancestry being from the Far Realm, where their creator god is believed to have originated. Their bodies are a bit smaller than humans when they lay spread out. But when they stand at full height, they are about 6 feet tall on average. They have eight arms like an octopus, four of which are always used to swim and walk. Their heads are the largest in proportion to their body, like an octopus, with small, beady eyes. Their squishy bodies allow them to be very versatile and slippery.

Below are three example locra adventurers:

Shploploop is a locra rogue that travels along the Sword Coast with a group of adventurers. They found him and saved him from dehydration, stranded in the shoals. He goes with them simply to learn and see the outcome of their adventure, as it is his first time on land.

Garglarp is a locra swordmage that has found swords to be a more apt weapon than tentacles alone. He travels around with a small handful of allies that came together as a result of their misfit shenanigans and appearances being a fright to normal society. But he hardly cares about this. All he wants is the knowledge of new techniques to further his skill.

Blorgplapf is a locra psion that seeks to learn more about the world above, particularly about its weakness. He has therefore sought out shadier guilds with the intention of learning the tricks of the trade, for one day, his kind will topple all these lands for their own god's glory.

When roleplaying a locra, remember that you will likely be out of your depth on land. Locra lost a majority of their land faculties when their god dragged their citadel down to the sea. But locra are curious and willing to traverse even deserts to learn. Most locra from the depths have the mind and outlook of a scientist. They have little regard for ethics when it comes to knowledge and the obtainment of it. Fear is not an issue for locra, as their minds are naturally numbed against the pheromone which elicits fear in their brains. This allows them to be absolutely bold when it comes to learning and confronting enemies. Consider what end goal your character will have for their quest. Most locra return to the depths to share their new knowledge. Their ultimate hope is that their knowledge will one day allow them to awaken their god so they can return to building their empire in the surface.