Lizardfolk are reptillian humanoids that inhabit swamps and marshes. 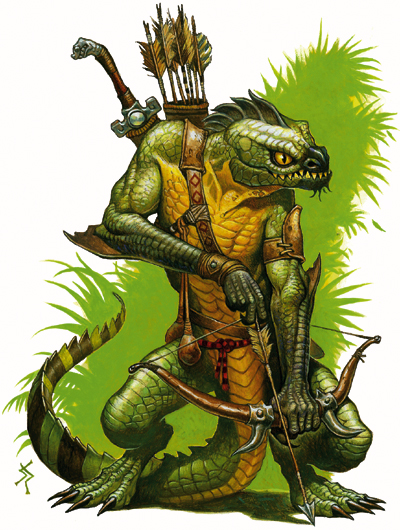 Lizardfolk are a very primal and savage race that live in tribal structures throughout the various wetlands of the world. Being superstitious they will often serve other more powerful creatures treating them as divine figures. If for any reason that belief falls into question they will test that creature's power and if found wanting will destroy them for having mislead the tribe. This same ability to question, and challenge, the world around them can cause some lizardfolk to stray from thier tribes and seek to understand the races beyond thier swamps.

Play a Lizardfolk if you want...

Lizardfolk are bipedal reptiles that have a humanoid body shape. Their heads look very snake-like and often they have large bony crests that run from the tops of their head down to their tails. Lizardfolk tails are thick and supply balance, but are otherwise useless. Lizardfolk come in many varities of scale color, but the most common are Greenscales and Blackscales. With most other Lizardfolk being shades of these two colors.

Player lizardfolk tend to be friendlier with other races, although they still tend to start all relationships with them from a stance of distrust. Regardless of other factors lizardfolk have a tendency to react savagely to things that annoy or hurt them. This can cause violent outbursts at inappropriate times. Lizardfolk are also very territorial by nature, and so they become very possessive of their belongings and will quickly defend them if they feel they are in danger or that something will try to take it from them.

Lizardfolk are naturally carnivorous and normally hunt in their surrounding swamps for wildlife to eat. Lizardfolk will eat any sort of meat they can find, although they prefer it fresh and take pleasure in hunting it themselves. Lizardfolk enjoy their food cooked, although they have been known to eat it raw if they must. Lizardfolk do not delineate the use of particular names for each gender, therefore any name may be given to a male or female without consideration for thier sex.

Hiss is a lizardfolk barbarian. He was captured as a small child by a Neogi, who raised him as a gladitorial slave. After years of cruel treatment, he found himself unguarded just moments from entering another arena to become the object of amusement for his tormentors. He siezed the opportunity and escaped into the surrounding forests, making his way to a small town many miles away. The town was an eclectic mix of many different races, and while small few gave him more then a second glance. Feeling safe for the first time in many years Hiss has decided to see if he can find the long lost swamp of his youth, and perhaps his family, but he also will never forget the evil inflicted upon him and he has sworn to free any creature he finds that has been forced to slave under another.

Siluss is a lizardfolk ranger, who was raised as a hunter for his tribe. While still very young he had met and befriended a human trapper who kept a small cabin within the swamp. As he grew older Siluss learned many things from his friend, including about civilizations beyond the swamp. But even as he grew more curious he soon found his tribe had little desire to interact with other creatures except if they could be used as food. Siluss tried to keep the location of his friend's hunting cabin a secret, but one day several members of his tribe came upon it and tore his friend to pieces. Arriving even as his fellow tribesman were feeding on his friend's remains, he lashed out and before they could react he had slain those who had slaughtered his only true friend. Now he has set out to discover what he can of the world outside his swamp, and he has vowed to never agin return unless it was to lead his people out of ignorance.

Sesesir is a lizardfolk rogue. For her entire life she has never been able to keep from taking things when its something she likes. At first the other members of her tribe would beat and punish her for stealing things, but as she grew older the responses grew steadily more violent. Eventually she would steal something that another tribal member truly coveted and she would pay with her life. The tribal elders did not wish to see her die, so she was exiled from the tribe and the swamp itself. If she returns and is caught she will be killed on sight. So now Sesesir lives on the outskirts of a small city, content to live by hunting nearby farm animals and wildlife. But her curiosity grows and she needs to find out what lovely things the creatures that live in the stone buildings must have.

The following feats are exclusive to the lizardfolk race.