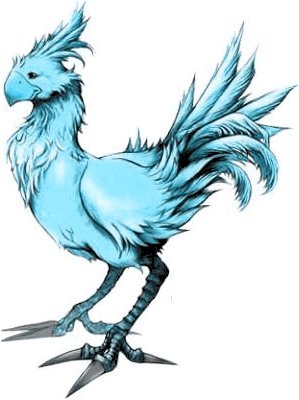 A large light blue foul preens in the grass, standing about eight or nine feet tall. Several others of its kind are around it, eating greens and nuts. Its long hard-scaled, three-toed legs make up a good portion of its height, the rest is feathery torso, wings, neck and head. It is almost entirely light blue, from its eyes to its tail feathers; even its scaly legs and hard, sharp beak are tinted light blue.

Flapping its wings furiously to work the muscles around its stomach and esophagus, a light blue chocobo can belch a super-cooled piece of ice, dealing cold damage to the target of its ranged touch attack. This is a full attack action that provokes attacks of opportunity. This attack deals 2d8 plus half the chocobo's HD in cold damage on a successful hit. A light blue chocobo is unharmed by its own Choco Frost. This attack is treated as an exceptional projectile weapon and has a range increment of 10 ft.

Light blue chocobo have the amazing ability to run over shallow bodies of water, including rivers, lakes, and water just off the shore. This is due to the adaptation of their bone to become spongy and hollow, while their skin, feathers, and hard legs and beak still protect their body just as well from attacks. Unfortunately, a light blue chocobo can only run over shallow water, not stand on it; the chocobo must remain moving to not sink.

Shallow water is any water with a depth of 10 ft. or less.