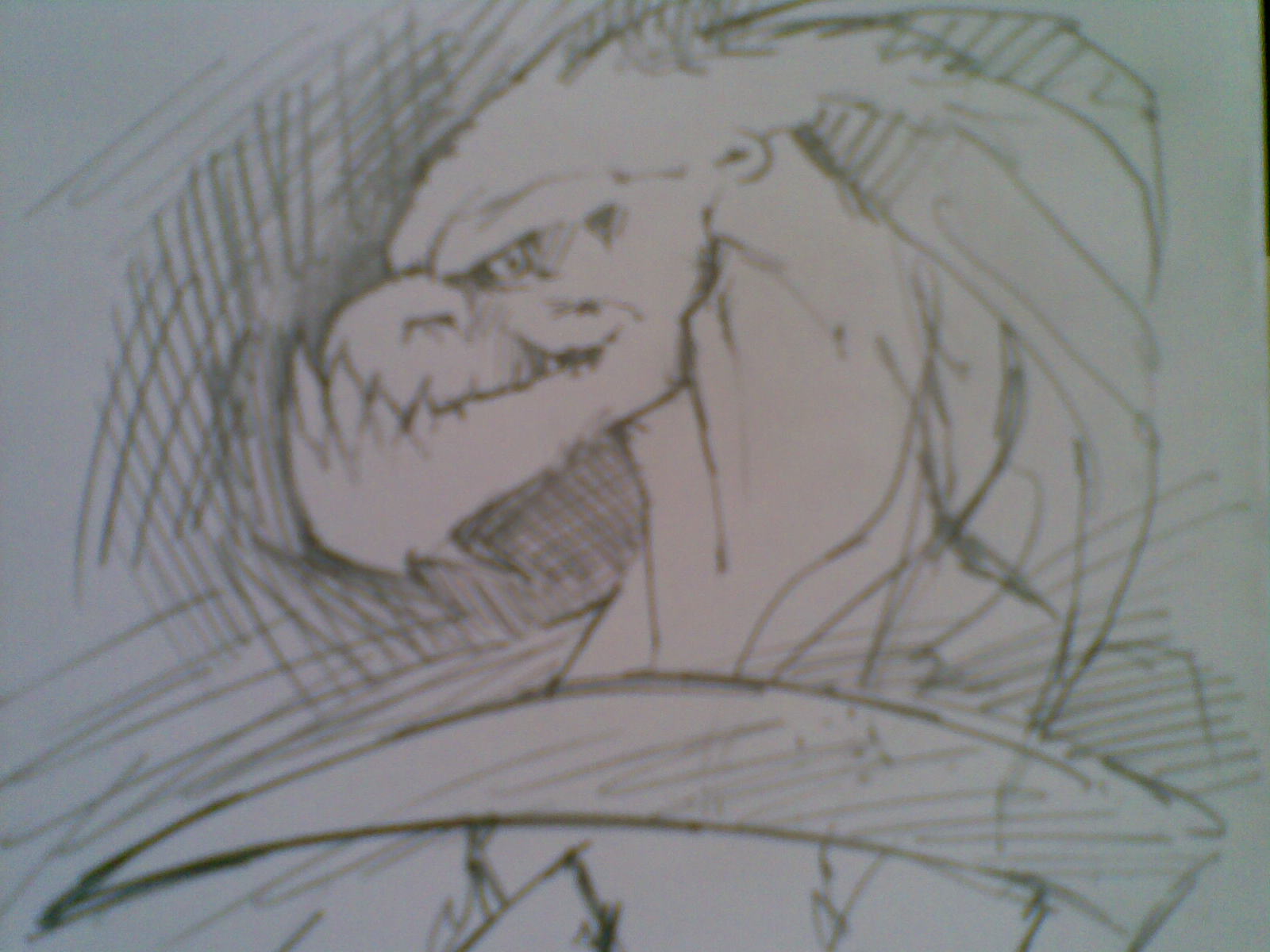 A tall wiry humanoid stands before you. It's milky-white eyes stare you down as blood drips from it's avian jaws.

A Kroot's quills on the top of it's head vary from black all the way to bone coloured and a Kroot's skin colour varies from Kindred to Kindred. It has milky-white pupil-less eyes. The Kroot favour primitive garb worked from the hides of animals and adorned with bones, handcrafted amulets and circlets. An adult male Kroot is about 6'6" and a half feet and weighs around 200 pounds.

The language a Kroot uses it's own alphabet, and sounds like a mixture of clicks and whistles.

Most Kroot encountered away from their homes are warriors; the information in the statistics block is for one of 1st level.

Kroot approach combat the same way hunters approach their prey. Many of them fight with spears and thrown weapons, though a few learn to fight with two weapons which allow for rapid, powerful blows.

After the fight is over the Kroot cannibalize (see below) the corpses of those who didn't retreat as well as their fallen allies, the latter being a burial custom.

Cannibalize(Ex): Cannibalize(Ex): Kroot have the ability to cannibalize and safely digest the corpses of their fallen enemies to gain hitpoints lost through combat. Each racial hitdice of the creature provides two hitpoints. (E.g. A tiger has 6 racial hitdice and will provide 12 hitpoints if cannibalized.)This does not allow Kroot to exceed their maximum hitpoint total. Most of the torso is eaten, meaning a raise dead spell will not awaken those unfortunate enough to fall to the Kroot in combat. Kroot cannot eat poisonous meat (e.g. zombie flesh) safely, and will have to make a fortitude save (DC:15) or become sickened for 1d3 hours. Cannibalizing a medium sized corpse is a full round action that provokes an attack of opportunity.

A crazed hound with an avian beak stands before you, hunger shining in it's milky white eyes.

Kroot Hounds are one of the many different kinds of creatures in the Kroot genetic family. Similar to dogs but with an avian beak, Kroot hounds are ferocious in battle, flipping and biting their enemies at will. They are however generally bad tempered and, on rare occasions, have been known to attack their keepers. Kroot Hounds are an evolutionary dead-end, but unlike other dead-ends they are not hunted to extinction by other Kroot. It is likely a Kindred consumed too many quadrupedal animals their offspring were Kroot Hounds.

Kroot send Kroot Hounds into battle first when they are present, either to tie up the melee combatants so they can assault with thrown weapons or to tie up the enemy archers so the Kroot are not under fire. Kroot Hounds often ignore these commands (DC:20 Handle Animal check) and attack whomever they wish, although they will always attack other creatures over Kroot.

Krootox are one of the many different kinds of creatures in the Kroot genetic family although one of the few the Kroot didn't hunt to extinction. Bearing a resemblence to hairless gorillas with an avian beak, Krootox are used primarily as beasts of burden and are an evolutionary dead-end like Kroot Hounds. Krootox are now much larger, stronger and mild-mannered as opposed to the overly agressive Kroot Hounds. Krootox are herbivores, making the cannibalization and gene absorbation redundant. Krootox walk with their fists to support them, much like a gorilla.

Despite their imposing nature, Krootox are harmless creatures unless provoked, the Kroot's agressive nature and hunting instincts gone along with their carnivorism. If attacked or forced to fight by their Kroot masters, Krootox slam with their large fists and occasionally bite. Kroot Herders lead the Krootox into battle, guiding them towards the enemy before they unleash their strength. Without their herders however, Krootox become harmless creatures and wander away from the battlefield. If losing the battle, Krootox retreat and climb anything to get height and remain there until their attackers leave.

Occasionally, the head of the Kroot Shaper (leader) council may ride a Krootox into battle.