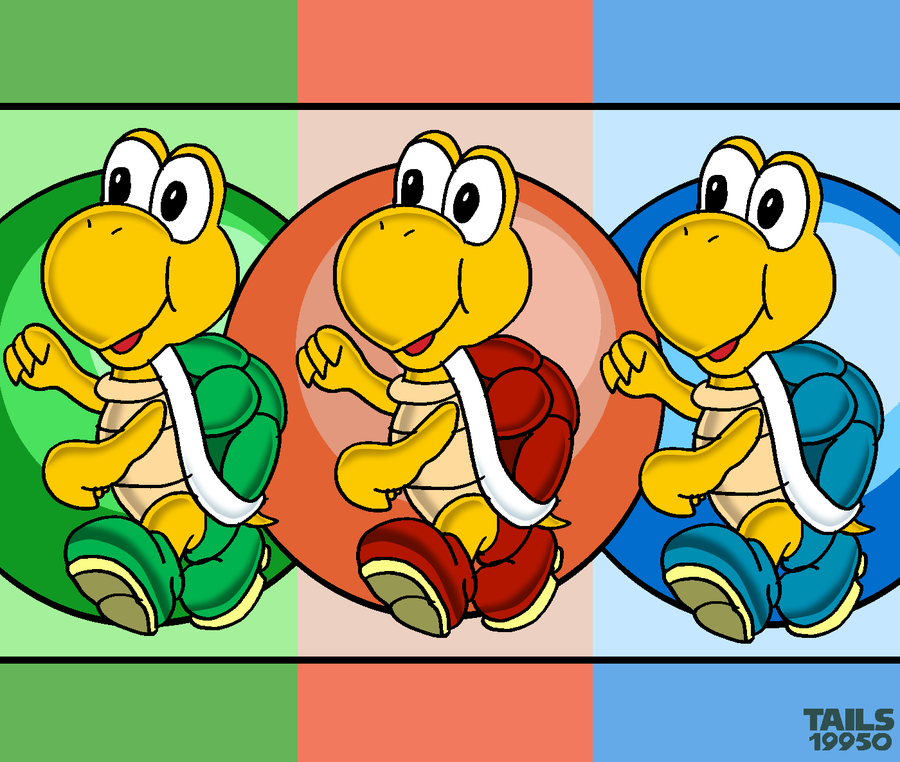 Koopas are a turtle-like species from the Koopa Kingdom. They appear in several colors and are a diverse species. Koopas are fiercely loyal but also crave independence. They have a history of being suppressed by narcissistic tyrants, and thus are opposed to strict governance. Koopas inwardly are good-natured but can easily find themselves in a bad scenario.

The 3 Species: Koopas are divided into 3 types: green or the Koopa Troopas, red or the Paratroopas and blue or the Magikoopas. The three species of Koopas all live in harmony with one another collectively using each's individual talents to better the Koopa Community. Green Koopas usually fulfill the labor and military roles in the community. They are known for their positive attitude and stalwart personality. Red Koopas tend to be more rambunctious and energetic than their counterparts. They enjoy fulfilling roles and jobs that don't make them feel too tied down. Blue Koopas vary greatly but all have a strong creativity about them. They fulfill roles such as scientists but even diplomats for the Koopas.

Green Traits: These Koopas are extra sturdy. They have the toughness feat and +1 Natural Armor.

Red Traits: They have wings in their shell fly speed 30 ft (average)

Blue Traits: These Koopas are natural conversationalists, +2 Persuasion. They also love to tinker with mysterious items and writings, +2 Arcana.

Abilities: The most important abilities for a Koopa vary greatly to what type of Koopa and what role he/she fulfills.

Shell Ability: Green - charges while in Shell, takes no penalty to AC when charging. Red - utilizes a unique ranged weapon technique, can conjure mini shells from a special pouch they carry with them always, see Red Shells below. Blue - obtains magician's wand, can perform dancing lights, light, ghost sound, mage hand and prestidigitation at will.

Red Skirmish: Red Koopas deals an extra damage on all attacks she makes during any round in which she moves at least 10 feet. Starting at level 3, moving 10 ft also gives them a bonus to their AC.

"10th:" Blue Shell - 1d8+Str Mod seeking explosive shell, range 250 ft. Upon contact a blue shell will explode due 1d8 force damage to all within a 15 foot radius. Those affected by blast must make a DC 15 Fort save or become stunned for 1 turn.

Int Mod Effects: A Blue Koopa adds his/her Int Mod to the damage or healing value of his/her spells. Example: Zip has an Int Mod of +3 and casts Blizzard so the damage is 5d4+3.

20th level - mp cost = 90: Ultima - touch, increases target and target's equipment size by 2, Raise Str, Dex, and Con by 6, and gives +6 natural armor, last 5 minutes. Meteor - Range 500ft, 4 fiery boulders rain down dealing 2d6 bludgeoning in contact, ranged touch attack, and each doing 6d6 fiery explosive damage in a radius of 40 ft, Reflex save for half damage. Flare - shoots a fiery ray at a target and upon contact does 20d6, 75 ft range, Reflex save for half damage.