As a kinslayer, you hate elves and eladrin with a burning hatred that one thing, and one thing alone can sate; destruction of every single elf in the entirety of existence. Total genocide. This is what you live for, your burning hatred driving you to kill and kill until you yourself are slain. You have made oaths to Lolth to destroy her bitterest foes, and these oaths consume you. Among those of the surface, you are utterly reviled. Even among your own people, you are considered tasteless. But you care not! You further your godesses' will, destroying those too weak to worship her dark majesty. 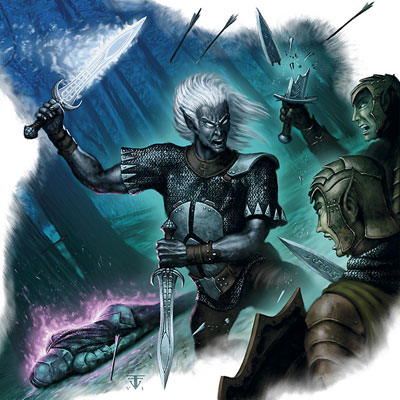 Surge of Hate (11th Level): When there is an Elf or Eladrin among your enemies, you gain a +4 bonus to initiative and a +2 bonus to all damage rolls until the end of the encounter.
Smite Elves (11th Level): The damage bonus from your battlerager vigor class feature increases by 2 for attacks against creatures of the fey origin.
Kinslayer Fury (16th Level): Once per round, when you miss with a melee attack when you are bloodied, you can make a melee basic attack against the target as a free action.