This set of four modules is intended for a party of four characters of level 20, possibly with some epic boons already awarded. Plane travel capability is a must. The campaign begins when the party is relaxing in a tavern in their home-base city, between adventures and wondering what comes next. A sad and weary gnome recognizes the party and...

...the party ends up probing a Frost Giant lair in the Tsojcanth Wilderness. Successful completion of the "Jotenheim I" module leads to a more challenging second module in Porphatys, the fifth layer of Carceri (aka Tarterus). From there, the party must travel to a citadel in Jotenheim on the plane of Gladsheim and do battle against King Tholak and his Frost Giants and other even deadlier minions. If successful to that point, the party might think they are done with the quest, but events may play out leading them to a great city in Muspelheim. There they must perform a dangerous preemptive strike against Yaga Shura and his Fire Giant evildoers, who would provide a great deal of firepower to aid in crushing a rebellion against the evil regime in Fortuna... that rebellion being led by some new allies found in Gladsheim.

DMs will need to download the following pdf dungeon module files, and also go to the D&D Beyond homebrew site and download some homebrew monsters that are identified in the pdfs. 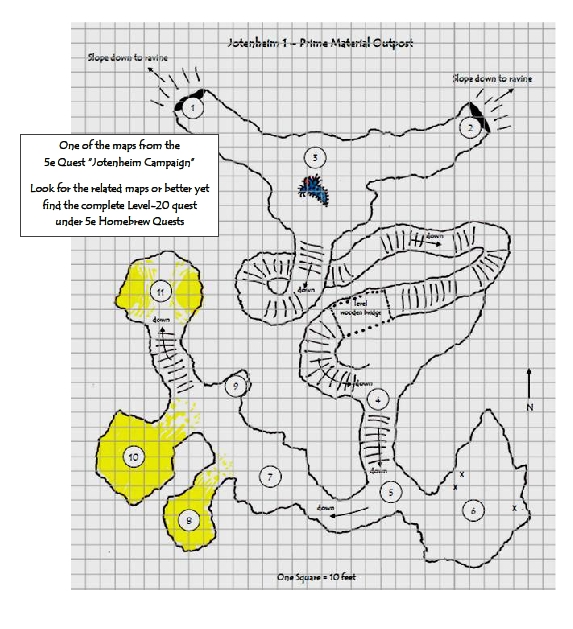 This adventure is heavily hack & slash based. There are few (if any?) tricks & traps. However, careful planning and flawless execution are needed by the party in order to survive and maintain the element of surprise as they progress through the various locations. DMs who wish to insert tricks & traps are heartily encouraged to do so...

The party are approached by a surviving gnome (or any humanoid group with whom the party has associated and been friendly in the past). That group has been attacked by Frost Giants and others allied with them; Here is an opportunity to avenge the losses inflicted by the giants, and show them who's boss. If this doesn't fit with the DM's ongoing campaign, any reason to have the party make a move against the Frost Giant lair should suffice. It should be in a cold and mountainous region.

The first module (Jotenheim I) takes place in the cold and mountainous wilderness somewhere on the Prime Material Plane. From there, the party moves on to Carceri (aka Tarterus) (Jotenheim II). Then on to Jotenheim on Gladsheim (Jotenheim III). After a layover in Fortuna, a great city in Gladsheim, it's on to Muspelheim, home of the Fire Giants.

All of the significant inhabitants of the quest are described in the pdf files for the four modules. Several creatures were taken directly from D&D Beyond homebrew creations, or were derived from creatures therein. Special thanks to those contributors who are identified in the module pdf files. Some creatures from the D&D Wiki homebrew creatures section were used as well. Thanks to those authors as well, although they are not identified (at least I could not find their identification). The pdf files describe these creatures, or otherwise point to where they are found on the website. DMs are encouraged to make challenge level adjustments as necessary for their own campaigns.

If DMs wish to change gender roles or whatever, have at it.

Developments dependent upon progress and success in the modules are described in the pdf files. These developments may include reinforcement of locales that have been attacked.

One magic weapon in the Muspelheim module is based heavily on the item of the same name in the D&D Beyond homebrew Magic Items. Description and author are identified in the module text pdf file.

Completion of each module leads to the next. Successful completion of the Jotenheim III module could lead to formation of a valuable new alliance for the party, but no further development of that thread is planned by this author. It will lead to the fourth module (Muspelheim). Successful completion of the Muspelheim module could lead to a new quest to destroy certain acquisitions from the Fire Giant nobility. The author may or may not pursue publication of that adventure.

In addition to whatever monetary and magic treasure that is acquired, award of epic boons after each module is suggested. This topic is discussed in each pdf file.

Experience is not tallied in these modules, as it is assumed that the party have already reached 20th level. Successful completion of each module results in award of epic boons (at DMs' discretion).

Successful completion of the Muspelheim module will definitely result in enmity by a certain clan of Fire Giants. Quick destruction of some magic items would put an end to their attempts to track the party and recover those items, but that is easier said than done. Magical obfuscation of those items' location until their destruction is advised.

Downtime at the end of each module is a luxury that cannot be afforded, as the interplanar enemy will discover the intrusion and prepare to better defend against further incursions.

If you use this quest, or even just look at it, please Talk to me; I'm interested in knowing if it's worth my time to provide material like this...