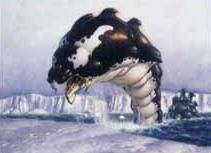 A jokulmorder, rising out of the icy ocean.

Syliath had a bad feeling, the water was deep here, and unusually still, that never boded well. As he swam there, suspended in the middle of an endless stretch of blue, he suddenly felt something, a low rumble coming through the water from a great distance. He turned to look through the icy water for the source of the rumble, and he found it. Looming just on the edge of vision, a vast beast flowing through the water with unnatural grace, singing it's haunting song. The leviathans had returned.

Jokulmorders are immense creatures who spend most of their life swimming through the deepest parts of the artic ocean, searching the water for food and singing in a way rather similar to whales. The average jokulmorder is about 200 feet from the tip of its nose to the end of its tail and weigh around 250 tons. Their young tend to be 30 feet long at birth and weigh only 20 tons or average. Jokulmorders reportedly live to be around 350 years old, and are said to reach lengths upward of 500 feet towards the end of their life.

Jokulmorders are not usually aggressive creatures, though they will attack something or someone on sight if they haven't eaten in a while. Their favorite types of food seems to be orcas and dire sharks, seeing as they tend to attack them on sight even if they have recently eaten.

Blindsight: Jokulmorders can “see” by letting loose extremely low-frequency sounds that are inaudible to most other creatures, but can be felt by everything caught in them. These low-frequency shockwaves allow them to locate objects and creatures within 180 feet. A silence spell negates this and forces the jokulmorder to rely on its vision, which is approximately as good as a human’s.

Cold Immunity: A jokulmorders body is coated with extremely thick blubber which insulates their body better than nearly anything else in this world can. A jokulmorder never takes cold damage.

Damage Reduction (Ex): The blubber that encases a jokulmorders massive body seems to absorb almost any blow that is directed at it. Subtract 10 points of damage from any attack that is landed against a jokulmorder that is made from a source that is not adamantine.

Massive Breath (Ex): A jokulmorder can hold its breath for a number of minutes equal to 4 x its Constitution score before it risks drowning.

Improved Grab (Ex): To use this ability, a jokulmorder must hit an opponent least one size category smaller than itself with its bite attack. It can then attempt to start a grapple as a free action without provoking an attack of opportunity. If it wins the grapple check, it establishes a hold and can attempt to swallow the opponent the following round.

Swallow Whole (Ex): When a jokulmorder begins its turn with a grappled opponent in its mouth, it can swallow that opponent with a successful grapple check. Once inside, the opponent takes 16d8+60 points of bludgeoning damage per round from the jokulmorder's gizzard. A swallowed creature can cut its way out by using a light slashing or piercing weapon to deal 100 points of damage to the gizzard (AC 29). Once the creature exits, muscular action closes the hole; another swallowed opponent must cut its own way out. A Colossal+ jokulmorder’s interior can hold 1 Colossal, 2 Gargantuan, 4 Huge, 8 Large, 32 Medium, 128 Small, 512 Tiny, 2048 Diminutive, or 8192 Fine or smaller opponents.