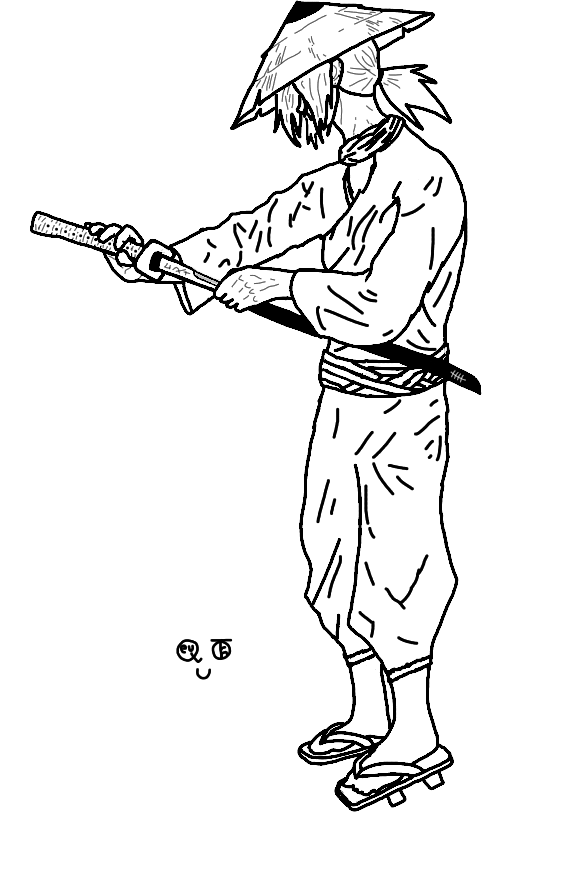 "When we got to the crossroad, we were ambushed"

"We didn't even stand a chance, the guards were falling like flies"

"SO, there I stood... 9 Armed bandits against me. They told me if I cried for help they would kill me."

"I thought myself already dead, so I cried for help anyways"

"One of the bandits thrusted his spear towards my neck... BUT THEN, Right before my eyes, the spear was cut in pieces by an invisible blade"

"He appeared out of thin air"

"The bandits, one by one, fell before the man. They were absolutely helpless against him"

"An arrow flew directly towards him, but before I could yell out, the arrow was cut in half mid-air"

"The bandits were disposed of, and the man just walked away"

"He won that battle without a scratch, and he never even drew his sword"

Iai swordsmen wield specially crafted weapons that are light but also durable. The power of an Iai swordsman often lies in the blade itself rather than directly in the skill of the wielder. It is said that Iai weapons are old weapons that remember their old users power, granting the new wielder the skills of the past swordsman. The Iai weapon can pass on many things from the old wielder, such as determination, memories, skill, prowess, fear, anger, hatred and sometimes love. Meaning that the new wielder is compelled to relive the successes and mistakes of it's past warriors. Thereby adding and perfecting their swordsmanship, so the next wielder would be even more powerful.

Due to the nature of these blades, Iai Swordsmen are unpredictable in nature. They don't follow a specific code or set of rules, but use their newfound immense combat prowess for either good or evil as they see fit. For selfish or selfless purposes. There is no knowing weather or not you will be saved by an Iai Swordsman or killed by one. Legends only rarely mention these blades, but it is known that any man to ever wield such an Iai weapon, are not to be treated lightly, if given enough time to fully unlock the capabilities of the weapon.

The Iai Swordsman is inspired by Iaijutsu swordsmanship, which is a part of traditional Japanese Kendo. The class is based on fighter, but it has a rouge subclass, if that's your type.

Iai Swordsmen wield deadly Iai Weapons once wielded by a different user, who's skills are passed on through the blade. Try to ask yourself why your Iai Swordsman chose to wield the blade, and how they found it.

Maybe you found the blade by a stroke of luck, or it was given to you by a family member, or maybe it was destiny?
Are you fulfilling some kind of prophecy of sorts?
What are your intentions for wielding the Iai weapon?
Who wielded the blade before you? And how many? Do you even know?
How old is the blade, and does it's appearance resemble your character?

You can make a Iai Swordsman quickly by following these suggestions. First, Dexterity and Charisma should be your highest ability score, followed by Constitution. Second, choose the Outlander background. Third, choose Leather armor, a Shortbow and 20 arrows, and an Explorers pack

As a Iai Swordsman you gain the following class features.

If any other creature where to wield your Iai weapon, it is considered to be a improvised weapon instead.

The Iai weapon is bound to you through a powerful ritual, ensuring that you don't loose the sword. Performing the ritual takes 10 minutes, and makes your sword reappear in an empty space in front of you. You may choose the nature of the ritual yourself.

It is possible to reforge new abilities into your Iai weapon through skilled blacksmiths granting it new properties, but for a hefty price. The price and description are seen below in the Iai weapon upgrade table. Only one upgrade is available at a time.

Iai swordsmen make lightning quick attacks unsheathing their swords from their scabbard as they strike. Starting at 1st level, strikes with your Iai weapon deal bonus damage equal to your Charisma modifier, if you had your Iai weapon stowed before making the attack. This damage increases to two times your charisma modifier at 5th level, thrice at 11th level, and quadruple at 16th level. This damage counts as weapon damage and is added in the calculation for critical strikes.

In addition, in order to stow your Iai weapon during combat, you must use a bonus action.

Starting at 2nd level, you know how to breathe calmly even in the heat of battle. Breathing like this gives you advantage on Dexterity and Constitution saving throws when your weapon is stowed during combat.

At 5th level, you gain expertise in Slight of Hand.

Starting at 7th level, continuous battle has honed your senses. You gain a bonus of +5 to your passive Wisdom (Perception).

Starting at 10th level, if your Iai weapon is stowed, you can use your reaction to deflect a nonmagical projectile. Deflecting an attack happens so fast that the untrained eye only sees the dust around you move. Make a Sleight of Hand check against your enemy's attack roll. On a successful roll you deflect the attack, negating the damage, otherwise you take full damage.

Starting at 15th level, whenever an enemy you can see makes an attack against you without advantage, they have disadvantage.

Starting at 17th level, after performing an Iaijutsu strike, can use your bonus action to make a stunning strike with the scabbard of your sword. The target must succeed on a Constitution saving throw or be stunned until the end of your next turn. The saving DC is = 8 + your proficiency bonus + your Charisma modifier.

Starting at 18th level, You have Truesight within 10 feet of yourself. 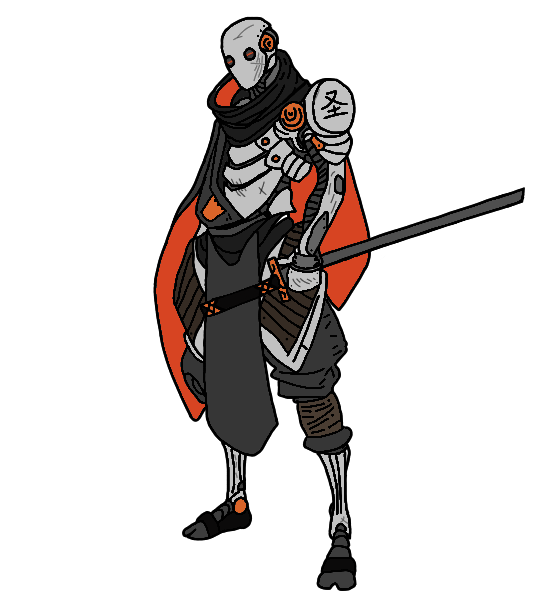 Mythrill, the Warforged Iai Swordsman. The character I'm currently playtesting with. (By Quel)

"It is not hesitation, it is patience". Users of this style are calm and collected individuals... or... at least in battle. These warriors believe in destiny, and they know that they must wait with patience, to strike their enemies at just the right moment.

At 3rd level, at the start of your turn, you can choose stow your weapon and skip your turn, and start to concentrate (as if concentrating on a spell). If you do so, on the start of your next turn using an action, or as an opportunity attack using your reaction, you may perform an Iaijutsu strike with advantage and double it's damage.

At 6th level, you can use an action to take a deep breath and calm your mind and body, further preparing them for battle. You gain a number of temporary hit points equal to your Iai swordsman level + your Constitution modifier + your Charisma modifier. You can perform this action once per combat.

Patience is a Virtue

Starting at 10th level, you gain proficiency in Insight, Perception and Constitution saving throws. You gain expertise if you are already proficient.

Starting at 14th level, whenever you enter combat, your first Iaijutsu strike benefits from the "Concentrated Blow" feature.

("resetting" meaning, you still have all your actions and movement.)

"Often people focus too hard on the weapon in their hand, and forgot that the body is the foundation for every weapon". The Iai Swordsmen who adopt the Resilience style are strong and tough warriors, able to withstand tough blows and heighten their defenses.

At 6th level, once per turn you can choose to enter a defensive stance using your bonus action, bolstering your defenses and reducing your movement speed to 0 until the start of your next turn. Doing so grants you resistance to slashing, piercing and bludgeoning damage from non-magical sources, and you have advantage on saving throws and ability checks against effects that would cause you to move or be grappled.

At 14th level, when an enemy attacks an ally, you may make an Iaijutsu strike as an opportunity attack against that enemy within range, and you may add your current AC to the attacks damage.

"Never give up! There is no greater defeat than not trying!". Iai Swordsmen who adopt the persistence style are often impulsive and determined. These warriors move around the battlefield with ease, using a fighting style terrifying for whoever may face them.

Starting at 3rd level, whenever you perform an Iaijutsu Strike, you can move up to no more than 10 feet in one direction without provoking opportunity attacks. This increases to 15 feet at 20th level. You may use this movement to pass through one or more enemies if you are able to move through them entirely and land in an empty space. If you do this, the attack deals bonus damage equal to your Sleight of Hand modifier. The first target hit takes normal damage, and subsequent targets take half damage. You must roll to hit for each target individually.

At 6th level, if you use an Iaijutsu strike to perform an opportunity attack, you sheathe your Iai weapon after the attack.

Starting at 10th level, when your Iai weapon is stowed, if an enemy were to decrease your HP to 0 it is reduced to 1 instead, you may use this effect once per long rest. In addition to this, Iaijutsu strikes you perform while on 1 HP are considered critical strikes.

Starting at 14th level, when moving more than 30 feet in a straight line, for every 10 feet of additional movement in the same direction beyond the first 30 feet, you deal cumulative bonus damage equal to your slight of hand modifier.

Starting at 20th level, when using Hunting Advance's effect to move through a creature, if you were to kill that creature or critically strike with your attack, you stow your Iai weapon and you may perform another Iaijutsu Strike.

You may only perform a maximum of additional Iaijutsu Strikes equal to your Dexterity modifier, per long rest.

"Why should I fear the dark, when I am it's master?" Taking out groups of enemies before they even realize you're there is a great defense in and of itself. The silence style cares not for the honor of battle, these warriors only care that they get their work done, one way or another.

Iai Art of the Silent

At 3rd level, you trained the speed of your hands and blade, not only for sword fighting, but also for theft and assassination. You gain proficiency in Stealth, Investigation and Thieves’ Tools. If you already are proficient, you gain expertise. Moreover, in order to communicate with other thieves or ninjas, you have learned yourself Thieves Cant. In addition, you can take the Hide action as a bonus action on your turn.

Starting at 6th level, when using an Iaijutsu strike attack from stealth, or while hidden, it is rendered completely silent. Once per turn, when you make an attack with your Iai weapon while Hidden, Unseen or when you have advantage on your attack, you deal bonus damage equal to your sleight of hand modifier. And when critically striking you may also double the damage bonus.

At 14th level, you change your Iai breathing technique for a short time by holding your breath, making your heart almost completely silent. If your Iai weapon is stowed you can use your bonus action to become invisible until the end of your next turn or until you make an attack or cast as spell. You may use this feature an amount of times equal to your Charisma modifier each long rest.

Starting at 20th level, when critically striking using your Sneaky Quickdraw feature, you may double the damage. (Basically Quadrupling the damage)

Perquisites To qualify for multiclassing into the Iai Swordsman class, you must meet these prerequisites: Dexterity 13, Constitution 13

Perquisites When you multiclass into the Iai Swordsman class, you gain the following proficiencies: light armor, simple weapons, martial weapons, sleight of hand.