So... How did you handle Hunters in the cities? - White Forest Rebel 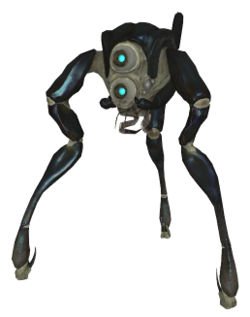 The Hunter's body is somewhat rounded in shape with a shiny, metallic green exoskeleton encasing it and three muscular legs attached to the sides and back of the body. On either side of the Hunter's body are what appear to be three pairs of compound eyes and pair of vertically aligned fléchette launchers on the Synth's front. Located directly underneath the launchers are two small limbs tipped with metal blades for impaling targets. They are often used by the Combine for scouting missions

Hunters are remarkably fast and agile, despite their large size.They can easily outrun a human, although they prefer to take down enemies from a distance with their explosive flechettes. Their two sword like mandibles are incredibly sharp and can kill an unfortunate resistance soldier with a single stab. They have a habit of ramming anything that gets close enough to deal sufficient damage.

Flexible (Ex): A Hunter is treated as Medium sized for navigation purposes only. This means that they can navigate through doors and windows that Large creatures could not normally fit through, but they retain all other bonuses that come with the Large size.

Strider Affinity (Su): Hunters and Striders share a type of "blood bond" with each other, as both of them come from the same home-planet. Because of this, they have a limited telepathic link with each other. They can communicate 3 word phrases with each other at a range of 450 ft, but only between the Hunter and the Strider, not between Hunters.

Flechettes (Ex): A Hunter fires razor sharp flechettes, in a 15 ft cone, that deal piercing damage and injure the foe. The flechettes then proceed to explode the next round, covering the already damaged foe with shrapnel, dealing 2d6 extra damage.

Ram (Ex): A Hunter can ram an enemy by making a charge without inducing an attack of opportunity. The enemy is punted backwards equal to 1/2 the distance the Hunter charged, and dealing 3d6 bludgeoning damage.

Weaknesses (Ex): A Hunter takes double damage from Bludgeoning and Fire. A critical hit has a fifty percent chance of an instant kill.