Aasimar are descendants and off spring of a once great angel race, cast down into mortal hood by a curse...

The Aasimar are the remnants of a once beautiful race of angels who were divided between masters, in time this formed into a great war between the angel race, a fight between good and evil that ended with a curse. Angered by the behavior of their servants the two gods struck down the angels, tearing their immortality away and sending them to the material plane. In time the newly named Aasimar spread all over the world breeding with one another to create the Aasimar of today. A mortal yet powerful angel race with their immortal wisdom still intact.

Play an Aasimar if you want...

As Aasimar were once a great Angel Race they resemble angels in many ways. For example an Aasimar's skin and eye color vary greatly and it is not surprising to find Aasimar with gold skin and shining eyes. Aasimar are always tall, a tribute to the glory days when they once wielded great divine power and they are naturally strong and there muscular bodies reflect this. Because of this Aasimar are almost considered freaks, taller than humans, with different colored skins and vibrantly colored eyes. They are often shunned for the their unique appearance and the amount of Aasimar who actually resemble humanoids more is a small number. All Aasimar live a long life and it is uncommon after around 20 years of age for them to change in appearance with many of the oldest Aasimar living to be over a thousand years old. 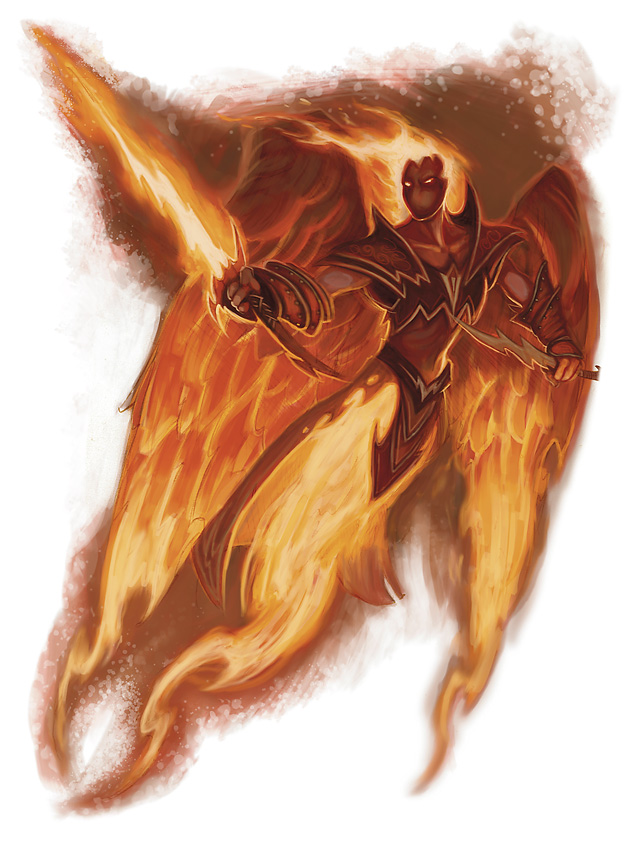 Aasimar find no comforts in human societies and only in their hidden monasteries do they ever truly feel at home. It is because of this Aasimar tend to travel, following whatever path they wish so that can find their place in the world. Some are drawn to divine paths such as that of the Paladin or Cleric while others wish to see the stars like they once did, becoming Warlocks, though these tend to just be fancies to pass the time as there is normally plenty of it for an Aasimar.

It is common for Aasimar to seek the answer to immortality wishing to return their once great selves or at least some different forms of themselves, while many of the Aasimar race wish to seek revenge against their now long forgotten masters, with many people sensing this determination. Aasimar are often intimidating to be around and anyone stuck in conversation with and Aasimar often finds themselves either on the edge of fright or hanging on the edge of the Aasimar's every word. As the offspring of angels Aasimar are protective of their ideals and many will protect them to the death.

Aasimar are often found in cities, whether in temples as preachers or in a nobles house as a guard it is general knowledge once you are sworn under the protection of Aasimar, you are as safe as it gets. If you were to ever visit an Aasimar city you would find it guarded 24 hours a day its prismatic walls protecting all inside from the dangers of the astral sea. Many people in fact visit such cities so they can see the astral sea from a different perspective and it is said the radiant energies reflection on the sea is beautiful site to see. It is also in these cities the Aasimars Angelic heritage is most shown as a visitor will often find themselves asked if they require any help or if there is a task that one of the many young Aasimar warriors may complete for them.

Muriel is a Aasimar Paladin, from a young age she has always thought greatly of herself and for this reason seeks power. With this power granted by her new master Hextor she hopes to have revenge against her old masters and regain her immortality. Muriel is a power warrior for this reason and fuels her attacks with her undying wish for revenge, and is known as a Astral weapon among her fellow worshipers.

Forfax is a Aasimar Warlock. Crazed by astral whispers in his sleep, the young Aasimar struck a pact with a great power so that he can hear their message clearly and it is because of this his mission was formed. From an early stage in his life Forfax strove to do good around him, knowing that some day he would finally find his forgotten masters, finally joining whichever side that accepts him as an all powerful creature. It is known for him to often gaze at the stars at night muttering to himself about the hidden gateways and scriptures in the sky.

Hael is a Aasimar Cleric, a powerful healer of Pelor. Hael was taken into a monastery from an early age wishing to use the divine powers locked in his blood to help others. In time Hael rose to the rank of head priest in his monastery and so left to preach the doctrines of Pelor to the people of the world. In his divine mission he joined others hoping that Pelors light would help them too.

The ancient ancestors of Dwarves corrupted by the elemental power of fire...

We were captured,enslaved by the fire giants with no way to escape... and then the corruption spread through our veins and the fires in our hearts were lit.

The Azer are whats left of a captured race from long ago in which the Dwarves now are descended from. Corrupted by dark power their fire giant masters twisted them, warping them with raw elemental power turning them into the firey dwarf people they now are.

Not all Azer are still captured however, and those who have escaped there masters often travel the astral sea in search of gold stone so that they can build there own homes. Many wander the material plane in search of such a belonging and there blacksmithing abilities are often welcomed in Dwarven forges providing them with somewhere to live.

Azer like dwarves are short, but broad their bodies being heavy and bulky. All Azer skin is dark ranging from a coppery color to a dark bronze shine. Most Azer where their firey beards and hair long and it is a well known fact that flames dim and brighten with mood. In battle it often said that a group of Azer look like a dragon breath advancing towards you. There eyes, are red glistening like rubies in there dark eye sockets and it is often claimed they can almost see into your soul, this causes a lot of discrimination towards the Azer as many see the red eyes and automatically think they are evil.

Azer are often talented adventurers as they are no stranger to the torture and hardship one may face during their journeys, and it is because of this many Azer stare into the face of danger and laugh. Many Azer adventurer to find a place to feel like themselves, others travel to feel free, as with no chains or masters such Azer see no reason to restrict themselves to one place.

It is common for Azer to become hunters, traveling blacksiths, Warlocks of great power in which they use to free the other Azer enslaved or paladins fighting for good and justice putting their lives on the line for the freedom of others. To be an Azer is to be both respected and feared for your appearance does little for first opinions and many see you as a intimidating brutish person due to this.

You act on your emotions letting your fiery temper, bravery and nobility get you into the stickiest and most dangerous situations however you always poor through being as tough as metal often.

Garoa is a Azer Warlock who pacted with infernal powers so that he could slay his master and escape to the material plane. Now he adventures so that he may grow strong and save the Azer still enslaved.

Roadae is a Azer Paladin of Moradin. Long ago he escape from his fire giants masters to find him self in a dwarven society he was seen to have potential and so trained as a paladin. Moradin is his life and he will do anything to better the Dwarf and Azer Race.

Brigan is a Azer fighter and faithful servant of a fire giant rebel group who broke away from the other fire giants during the enslavement of the dwarf kind. Wielding his mighty maul Brigan hunts and kills giants hoping to free more of his brethren.

Earliest known records of the Kobold race depict them as traveling in bands or vicious packs that have the disposition to attack and kill other life forms they encounter. Kobolds are observed as relatively short creatures of 2.5 to 3.5 feet in height, lizard-like in appearance, and covered from head to foot in scales. Kobolds have an especial hatred for other forest races (such as Sprites, Brownies, and Pixies) and have been known to torture these creatures before killing them.