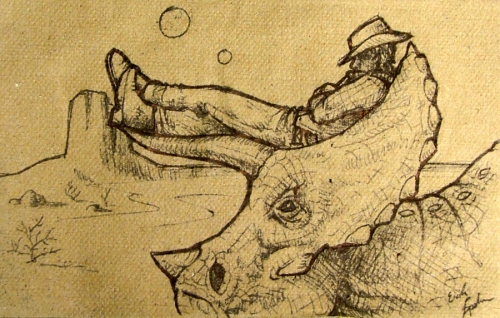 Halfling napping on his mount.

Unlike most halflings, the plains halflings tend to have a more serious, war-like tendency.

Plains halflings stand approximately four feet tall with sun-browned, leathery skin. They typically have hair ranging from red to brown. Their eyes are usually brown, but can range across the spectrum.

The Plains Halflings get along extremely well with Otterlings and Sandstorm Dwarves, but are mildly stand-offish to most elves. They tend to attack humans and gnomes first then they ask questions.

Any good, but most tend to lean Chaotic Good.

They live in the deserts and plains regions in the extreme north of Shekastkoré called Tufanshen.

All speak Common and Halfling. Most others speak at least one of the following fluently: Dwarven, Elven, Gnome, and Goblin.

The only constant in their names is a color. This color depends on what is around the mother at the time of naming, as well as any portents. For example: Obsidianred Beastclaw.