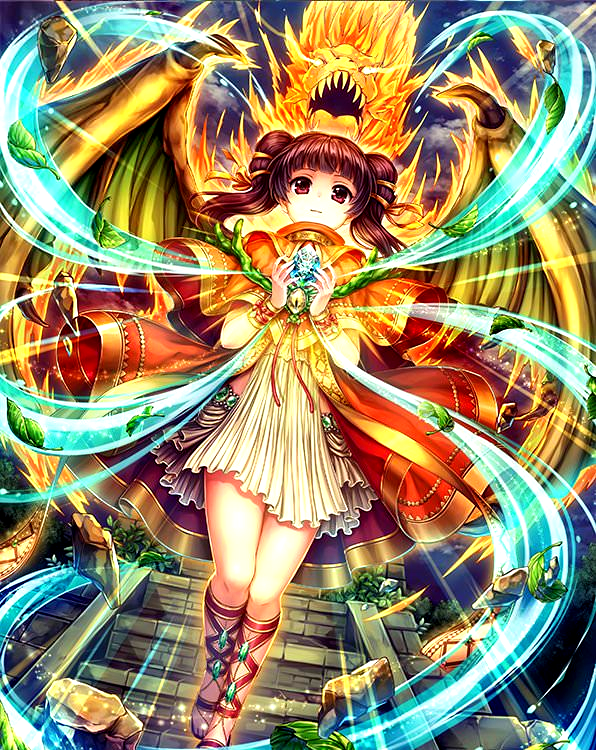 The Dragons within fire emblem appear humanoid, with Elven Ears and often very youthful. Their dragonic selves are very unique, often times very terrifying beings. The Half dragon is always half human, half dragon despite the Elven features. Due to the similar nature of an elf and fire emblems half dragons, you will have access to Human and Elven feats.

The dragonform comes in many different variations, Ranging from traditional to goat like demons, Eels and many other creative forms. Create your transformation however you see fit but remember to incorporate claws, wings and a tail

You also start with a Dragonstone item,

It looks like a crystal, Arcana checks against it will understand its Dragonic and Magical in nature,

They may also detect what type of dragon you are.

this'll be used for your transformations, It can also be used as your Spellcasting focus.

The Manakete is a shapeshifting combat class that recurrently appears across the Fire Emblem Series,

Manaketes are essentially Dragons that have stored the bulk of their draconic power within Dragonstones and thereafter assumed a human form.

Members of the class usually bear subpar base stats that are offset by their impressive Growth Rates;

several level ups are all that is needed in order for their potential to be realized each time they assume their dragon form for combat purposes.

An additional option for a subclass is the Silent Dragon.

Human/Dragon hybrids.
Ability Score Increase. Your Wisdom score increases by 1 and your Charisma score increases by 1.
Age. Half Dragons reach intellectual maturity in their early teenage years, though at that point physically they appear much younger than other races would by adulthood. They tend not to resemble adults of other races until early in their second millenium. They typically live to around 10,000 years.
Alignment. Half-Dragons alignments depend on your background, often times they are more innocent at heart, but this can be twisted.
Size. A Half-Dragon height can range from 4 to 7 feet, your size is Medium.
Speed. Your base walking speed is 30 feet.
Darkvision. You share the heightened senses of a Dragon. You can see in dim light within 60 feet of you as if it were bright light, and in darkness as if it were dim light. You can't discern color in darkness, only shades of gray.
Draconic Nature. Your creature type is considered to be both dragon and humanoid, and you are considered to have the Elf tag.
Dragon Breath. You can use your action to transform into a Dragon form, then exhale destructive energy. Your dragon subrace determines the size, shape, and damage type of the exhalation. When you use your breath weapon, each creature in the area of the exhalation must make a saving throw, the type of which is determined by your dragon subrace. The DC for this saving throw equals 8 + your Constitution modifier + your proficiency bonus. A creature takes 2d6 damage on a failed save, and half as much damage on a successful one. The damage increases to 3d6 at 6th level, 4d6 at 11th level, and 5d6 at 16th level. After you use your breath weapon, you can't use it again until you complete a short or long rest.
Fey Ancestry. Magic can't put you to sleep.
Dragonic Magic. Using a Dragonstone you can enhance your abilities, during this transformed state your armor and weapons are "Unequipped" and your AC equals too 10 + Constitution + Charisma Modifiers. Attacks made in this form are always magical, you additionally have access to Dragonclaws and Breath attacks, determined by your subrace.
Languages. You can speak, read, and write Common, Draconic
Subrace. You are descended from a Dragon Choose one dragon subrace to decide your type.

The powerful dragonform can only be accessed by the true owner of the stone, Using this stone will allow you to access the Dragonform only abilities, The Stone will consume an action, but if specified you can tell your GM your character will automatically transform in the initiation phases. Reverting the form will also consume an action.

Whilst in Dragonform you can not wield weapons or armor.

Whilst in Dragonform you cannot cast Class abilities.

Your Dragonstone is unique, if lost you can however try and work out a solution for a replacement with your GM.

The most powerful and majestic of metallic dragons. Dedicated foes of evil, gold dragons are respected for their wisdom and fairness, at the same time, they are known for being aloof and grim in nature. As a Gold Dragon hybrid, you naturally possess those qualities to some extent. Your scales are brilliant gold with undertones of goldenrod and your eyes can be any shade of yellow. You have the ability to breathe a cone of brilliant fire.

The friendliest and most social of the metallic dragons, who cheerfully assist good creatures in need. As a Silver Dragon hybrid, you naturally possess a love for people and conversation. Your scales are brilliant silver with either matching eyes or eyes with grayish tones. You have the ability to breath a cone of ice.

Divine Dragons are stern and very disapproving of evil, They don't tolerate even minor offenses by evil creatures

In spite of this stance, they are also considered one of the most compassionate beings. They have limitless empathy for the downtrodden, the dispossessed, and the helpless

Radiant Resistance. You have resistance to Radiant damage.
Radiant Breath (Dragonform Only). Your breath weapon is a 5x30 ft. line that deals Radiant damage and forces a Dexterity saving throw. allies within 15ft of you gain half of the damage dealt to the enemy(s) as hit points, you do not.
Protector of the Weak(Dragonform Only). If an ally within 15 feet of you health drops below 0, You may use your reaction to take the damage they dealt even if your AC surpasses the attack preventing the ally from taking damage.
Divine Claws (Dragonform Only). Your Unarmed attacks in Dragonform are non lethal unless specified dealing 1D4 Magical Bludgeoning Damage The damage increases to 1d6 at 6th level, 2d4 at 11th level, and 2d6 at 16th level.

Silent Dragons govern over water, manipulate peoples' hearts, and have the ability to see into the future. Silent Dragons breathe vapors of fetid air in order to damage its foes. This class is exclusive to

Anankos due to the fact that he's the only pure-blooded Silent Dragon to appear within the game. Descendants of Anankos may have the ability to transform into a dragon, but they won't fully be a Silent Dragon.

Necrotic Resistance. You have resistance to Necrotic damage.
Dark Breath (Dragonform Only). Your breath weapon is a 5x30 ft. line that deals Necrotic damage and forces a Dexterity saving throw. creatures hit with this are imposed with disadvantage on their next attack.
Crazied Rampage(Dragonform Only). When your health drops below 0, You return to life with half of your maximum hit points as temporary hit points, you gain advantage on your next attack, This can only be done once per long rest.
Dark Claws (Dragonform Only). Your Unarmed attacks in Dragonform deal 1D4 Magical Slashing Damage The damage increases to 1d6 at 6th level, 2d4 at 11th level, and 2d6 at 16th level.
Silent Dragon. You have proficiency in Persuasion and Initiative

Lightning Dragons were more likely to be mocking and manipulative than outrightly cruel or murderous to 'lesser' creatures, aided greatly by their natural talents for hallucination. They were infamous for tricking desert

travelers into drinking sand or going miles out of their way to avoid nonexistent dust basins. Their breath weapon was a line of lightning or a large electrical discharge.

Thunder Resistance. You have resistance to Lightning/Thunder damage
Lightning Breath (Dragonform Only). Your breath weapon is a 5x30 ft. line that deals Thunder damage and forces a Constitution saving throw. creatures hit with this are prevented from taking any form of action next turn. Enimies within 5 feet of a target struck takes half the damage dealt to that creature however have unrestricted movement.
Reactive Vantage. The moment an enemy rolls an attack against you may use your reaction to attack them before they are able to roll damage against you. Should you kill the target in this manner you will take no damage as you intercepted the attack. They also must be within melee range and the counter attack must be made with a melee attack. Spells cannot be used in this manner.
Lightning Claws (Dragonform Only). Your Unarmed attacks in Dragonform deal 1D4 Magical Slashing Damage The damage increases to 1d6 at 6th level, 2d4 at 11th level, and 2d6 at 16th level.

Optional feats unique to this race.

Your dragon can use its wings to fly whilst within Dragonform,

If you have Partial Transformation Master you may fly in your base form so long as you are light or unarmored.

Flight speed is based upon your movement speed.

Additionally choose an ability score to raise by 1.

Your Dragonform can use its tail to attack using your reaction, doing so will consume your reaction. This damage is identical to your claw damage but will be bludgeoning.

You can also partially transform using your Dragonstone in your non Dragon state and allow access to your Tail and Claws.

Additionally choose an ability score to raise by 1.

Will of the Protector

When you transform you inspire your allies, on their first attack they will have advantage on their next strike.

This can only happen once per combat.

Your Dragonstone holds charges equal to your Dragonbreaths Save modifier,

For example, your using a Golden Dragon with a 3 modifier to Dexterity your Dragonstone will have 3 charges. You may expend a charge to use your Dragonbreath additional times, these charges replenish on a short rest.

Your Dragonbreath additionally can ignore cover and can be doubled in length or width.

You can cast known Spells whilst in Dragonform of the element type equal to your Dragon Resistance as if you were not transformed.

Upon transforming into a Dragon you glimmer brightly giving you advantage on your next spell, This can only be done once per long rest.

Your Dragonform changes into a more defensive version

Your AC modifier in Dragonform can be switched from Charisma and Constitution to any of these three, Charisma Constitution Dexterity Strength Wisdom Intelligence.

Any Spell or Effect that would push you back, reduce the amount of distance pushed by half.

You however can no longer cast spells given by your class whilst in Dragonform even with the Dragonic Caster Feat.

Your attacks are Empowered,

Your Claw & Dragonbreath damage is modified by a stat of your choice.

When your in Dragonform your Claw Attack range is increased by 5.

Your scales harden; you gain a +1 bonus to AC while you aren't wearing armor and in dragonform.