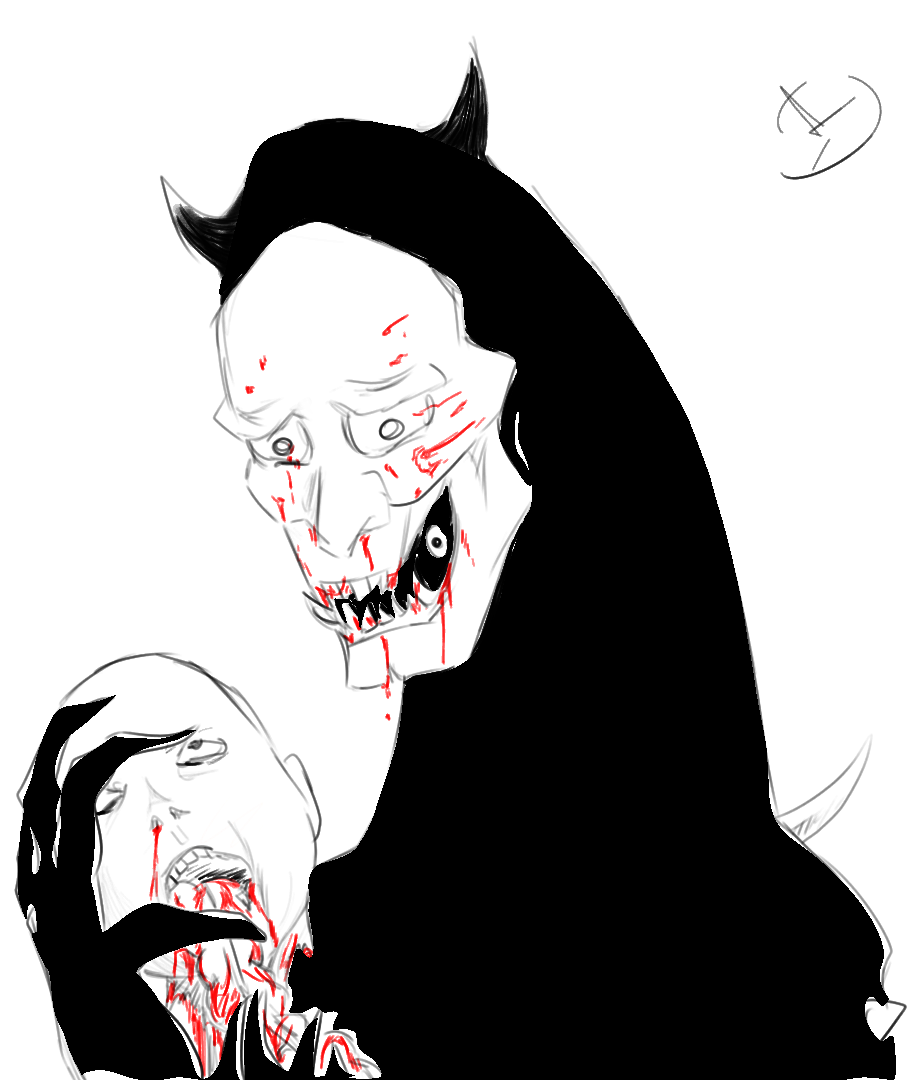 These demonic creatures resemble dark figures with protrusions of bone throughout their thin, malleable bodies. They have a pair of small horns atop their heads, and a very long, thick trunk of a neck. Their faces are an odd mask that is usually of monstrous design. It is believed that it is actually a part of their skull, and protects their actual face from harm. Those who have seen under the mask say it resembles a mass of eyes in darkness. Haileen have long, dexterous hands with nimble fingers that belie a great deal of strength and savagery, which has costed many their lives.

Haileen are believed to be demons from the layer of Maelstrom in the great Abyss. There, they formed from souls banished to the Abyss, growing from whelps. Their creation is of a particularly odd nature since they sometimes are mentioned to resemble undead more than demons, given their dark and bony appearance. They are believed to form from the souls of psychopaths and cold-blooded traitors, and find greatest alignment with the goddess of misfortune, Beshaba. Unlike her usual worshipers, haileen had little fear of bad luck, and revered her out of true faith. When she left Abyss, some remain to upkeep her realm, while others crawled their ways past the magmas and winds to reach the Material Realm via portals scattered about the Abyssal layers. Once out in the world, they look to do as Beshaba had bade them do for many years: bring misfortune about the world.

Haileens have little to nothing left of their original selves, save maybe the sadism and ill-will they harbored in life. Even as demons, haileen are a bit reviled for their chaotic nature that can repel even other demons. They are united under the banner of their goddess, but have little issue with betraying or hurting one another. It should be remarked that haileens are extremely resistant to pain or feeling in any way, physical or mental. This allows them to be extremely persistent, going as far to chase targets even when they near the brink of death. As they embody Beshaba's will, they despise Tymora and seeing others with good luck. Usually, being chaotic, they have no problem remedying any of their problems with old-fashioned murder. As such, haileen sightings are usually associated with ill-omen.

As stated, haileens are born of some of the worst dredges of society, and they mirror this as demons. They have little to no regard for life, including their own or that of their own kind. Like lizardfolk, one can say them to be calculating and objective, speaking in manners where it is less of "I feel" and more of "it is." However, they do laugh and take joy in the misery of others, and many find death to be a laughing matter. Their chaotic nature is always scheming as well, so they are capable of making allies for their own ends, as well as backstabbing them if needed.

Their names are usually in Abyssal rather than Infernal. These names are given with some vague feeling of their previous name, but often it is just a very random name. Some may have been given different names by Beshaba, which they keep.

Demons with bone masks
Ability Score Increase. Your Dexterity score increased by 2, and your Intelligence score increases by 1.
Age. Haileen are born fully grown and do not age, nor die of age.
Alignment. Haileens often tend towards chaos and evil, spreading misfortune and suffering.
Size. They stand about a bit taller than 7 feet usually. Your size is Medium.
Speed. Your base walking speed is 30 feet.
Darkvision. You can see in dim light within 60 feet of you as if it were bright light, and in darkness as if it were dim light. You can't discern color in darkness, only shades of gray.
No Feeling. You do not know of love or fear. You have advantage in saving throws against being charmed and frightened.
Beshaba's Emissary. You do not fear bad luck. When you roll a 1 or 2 on an attack roll, saving throw, or ability check, you may reroll. You must take the new result, even if it is another 1 or 2. You regain use of this feature when you finish a short or long rest.
Attuned Negativity. Your being is not so much infused with flame as it is with chaos and negative energy. You are resistant to necrotic damage.
Skull Mask. Your face is always the same look, being made of exposed bone. No one knows your true intentions, and you make them uncomfortable. You are proficient in either the Intimidation or Deception skill.
Languages. You can speak, read, and write Common and Abyssal.