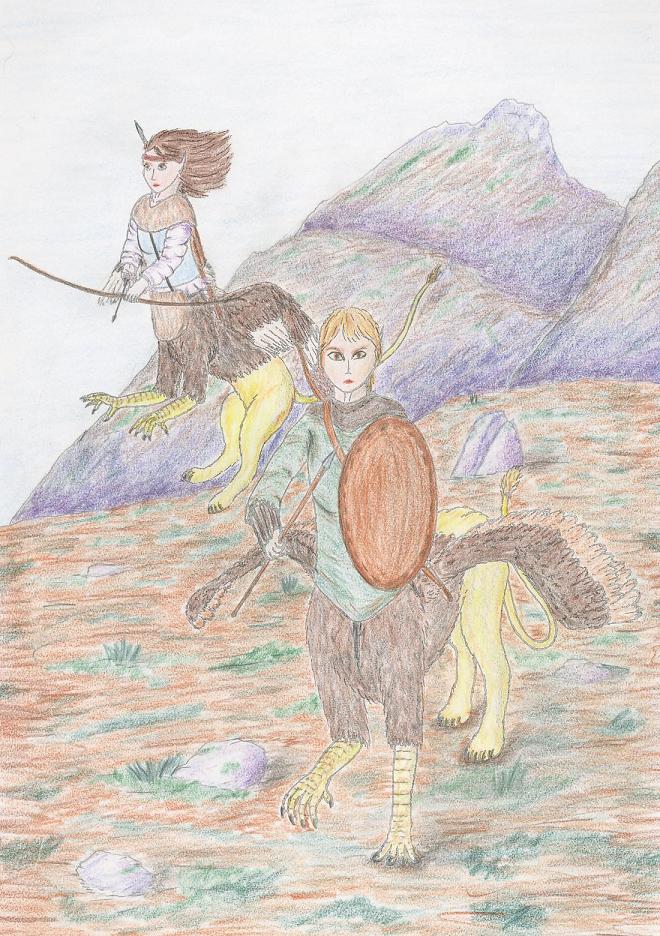 Gritaurs are a fairly recently created race. A few hundred years ago the Southern Empire was collapsing, unable to bring its rebellious northern provinces under control. To counter the aerial troops available to the northerners the imperial mage corps created a new race, supposedly perfectly suited to act as flying or land-based scouts and skirmishers. Despite serious cost overruns and some spectacular failures the project was declared a success in record time.

Unfortunately for the Empire the gritaurs where brought in to late. They did their job fairly well, but were completely outmatched by the numbers and experience of their opponents. Near the end of the war the Empire tried for one last great offense, bringing in every gritaur they could spare as support. However one suspicious gritaur used scouting skills to spy on the commanders for the empire and found out that the gritaur's mission was to be a suicide mission - the Empire was changing its tactics, and the gritaurs would be sacrificed to make way for the other troops.

Infuriated by this news most of the gritaur forces deserted the Imperial army on the day of the assault. As the news spread gritaurs in other units also left. Hunted by their former employers and seen with hostile eyes by the northerners they formed into smaller groups and set about making their living away from all others.

Play an Gritaur if you want...

Gritaurs are small human/griffon centaurs. The upper body looks like a young - though fairly heavily built - human woman. The impression of youth comes from the small breasts and very large eyes, not from actual age. They also have pointed elf-like ears which have caused some to speculate that elves went into their creation as well, but there is nothing that supports this. The head of a gritaur reaches about 5' up.

Below the human waist is the eagle part of a griffon, scaled to size. Even so it's still quite large, reaching a little less than 3' in height with a wingspan of around 20'. The forelegs are bird-like, covered in feathers down to the knee and ends in short but wicked talons. When walking the claws are bent up so that they aren't worn down from scratching the ground. The talons can grip objects quite effectively, but except for a few legendary individuals the fine control isn't up to wielding weapons.

The hindquarters are lion-like, but with longer and more muscled legs making walking easier over long distances. The tail is very long, 4-5', powerful and dexterous. In flight it's used as a rudder to manage fine control, but it can serve as an extra hand to grab and hold simple objects or unruly children. At best a gritaur can lift roughly 3x Strength pounds with its tail fully extended, but the grip is strong enough to hold 20x Strength pounds for a short while.

Hair color is typically light to dark brown, eyes are brown or green, skin color is white or dusky, feather color is brown or sometimes black, often with lighter color on the primaries, and fur color is sandy gold.

Gritaurs mature a little faster than humans, being adult around 15 years of age. They live for roughly the same time.

All Gritaurs are gender neutral. Gritaur culture, in response, has developed the words shi and hir (sometimes pronounced zi and zir) to substitute for the normal pronouns. Only in case of pregnant individuals are "she" and "her" sometimes used. As this article is not written by Gritaurs and as English pronouns are considered a closed set for grammatical reasons they are not used. Please, however, make note about Gritaur's culture.

Gritaurs are psychologically fairly close to humans. One minor difference is that due to their history gritaurs tend to be extremely suspicious of authority, which many people who meet them interpret as a love of independence. Gritaurs are in fact happy to work for others, and gritaur societies usually have clear leaders. But it takes quite a while for a leader to gain a gritaur's trust, and gritaurs that take employment in other societies usually make it clear that they will leave immediately if their employer betrays them in any way. Since the definition of "betrayal" is up to the gritaur few people really trust them in return.

The major difference is that gritaurs are all fully functional hermaphrodites which make sexual divisions a non-issue. Gritaurs were created as hermaphrodites so that the designers would have more options when breeding them, thought there is also some speculation that the female gender was added to allow specific control spells to be used on them. If so, that obviously failed. That doesn't mean there aren't other issues: Gritaurs are not well designed for bearing young, and on average 20% of all childbirths result in the mother dying and almost 40% of all children are stillborn! Even with healing magic available those numbers are no more than halved.

This means that gritaurs view sex from a female position negatively, but highly respect mothers. This carries over to other races as well, which can cause some problems when gritaurs usually ignore the king for the queen, for example. It also makes for some confusion when people from other races assume that a gritaur they meet is female due to the way shi looks, while the gritaur in question acts like a man.

Typically Gritaurs act like a female when calm, but switch to a more male-like behavior when agitated. This varies somewhat depending on how the individual Gritaur has lived, but the basis is always true. Which sometimes causes problems for Gritaurs in military professions alongside males of other races.

Iramin is a ranger and a healer, having been initiated in the worship of Pelor. Not being able to stand the pressures as the tribe's healer, Iramin left for the world outside to make a living as a mercenary scout. A soft heart has proven to make this career choice a difficult one at times, especially when an innocent person is in danger or pain, more so when the mission is also endangered. Iramin prefers using a longbow in combat, only resorting to sword and shield if pressed.

"Stormcloud" Eriann is an unusual gritaur, being a rogue. While a member of the Darkfoot clan, Eriann found an incredibly valuable knife. The pursuing arguments made Eriann feel most unwelcome in the tribe, leading to a swift and silent departure one night. Eriann hasn't had much luck among other races either, finally ending up working for various shady individuals as a lookout and "second-story man". In an attempt to blend in with local society, Eriann often wears men's clothing, with limited success. Hand crossbows and a tail-wielded dagger is how this Gritaur tends to fight.

Melline is a ranger that leads a group of gritaur hunters. Harboring a grudge against the goblins and orcs that live in the same area, Melline often goes out of the way to attack small parties of them. Bold action, clever traps, and accounts of ambushes with spinning dual-wielded swords have earned Melline the status of something akin to a living legend in the nearby villages.