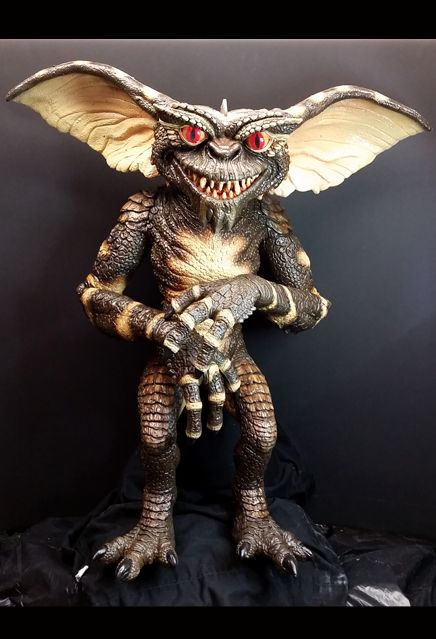 Gremlin have a body much like that of a gnome but only standing at just over two feet tall and weigh about 5 pounds. With a round ball shaped head that looks slightly too big for its body, a Gremlin is a strange sight indeed. This is made all the stranger by the Gremlin's over-sized ears like that of a bat that hang at the side of its head almost touching its shoulders. These traits make the Gremlin look repulsive or strangely cute depending on the community it comes from. Gremlin have reptilian scales covering most of their bodies that range in colors from pale yellows, to dark green. Gremlin eyes are often red, yellow or green. They also have horns detailing their heads and backs.

Gremlin speak their own spicial language, Grezzen. In order to speak any other language, they must spend 2 Skill points for each addition language they wish to speak.

A Gremlin's only desire is to be happy; they have very little in terms of possessions and have no material needs.

Light Sensitivity (Ex): Gremlins are dazzled in bright sunlight or within the radius of a daylight spell.

Vulnerability to Sunlight (Ex): Gremlin loathe sunlight, for its merest touch burns their flesh. Each round of exposure to the direct rays of the sun deals 4 point of damage to the creature.

Dark Spawn(Ex): When a Gremlin gets wet from water, they produce 2d4 Dark Spawn. They are evil spawn that pop out of the Gremlin's back as small balls of slime. It take 2 rounds for the Dark Spawn to take full form. Gremlin only care about their own entertainment especially at the cost of others. However, Gremlins will use this to their advantage when they believe that it is their only hope to survive.

Genetic Instability(Ex):Gremlins are genetically unstable, which makes them very attractive to evil wizards wanting to do experiments. When genetic material from another animal is introduced in to a gremlin, they rapidly take on some of the traits of that creature. However due to the nature of the gremlins, most altered forms do not wish others to have their new abilities. Two types are the Gremlin Spider and the Gremlin Bat.

Gremlin prefer to flee rather then fight when out numbered. But if they have to fight, they bite and claw at their attackers face trying to gain an opening to flee. when their numbers are in their favor, they prefer to torment their foes.

Gremlin as an Improved Familiar[edit]

Gremlin make astoundingly poor characters, due to their poor strength and tiny size.