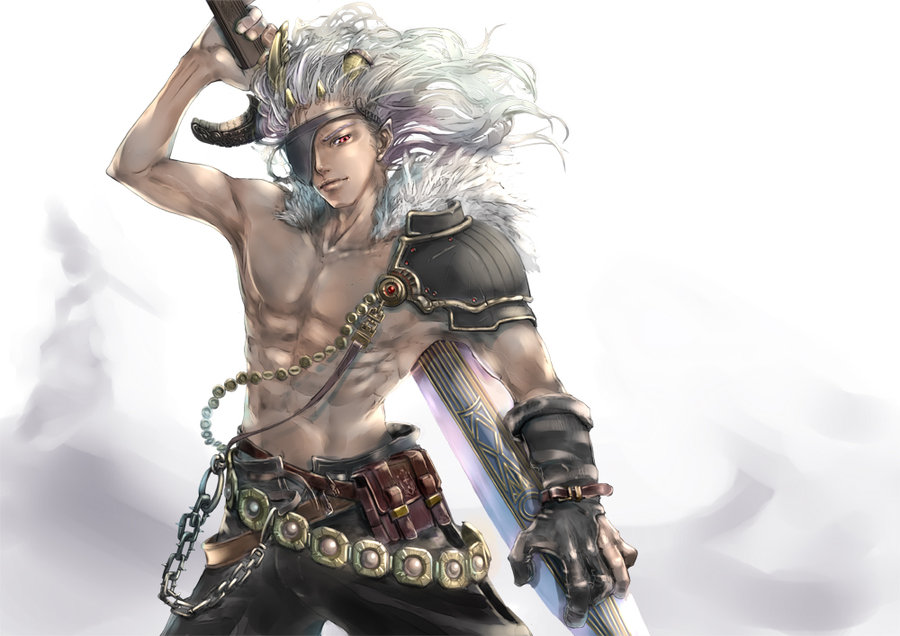 "This class has been passed around for quite awhile, not sure where it originally came from or who made it, but I in no way claim this class as my own. Please do not edit this."

Hatred can be a powerful weapon, when channeled correctly. It can inflict vile curses, horrifying ravages, and even scar the soul of its victim, depending on whence the animosity is directed and how virulent the hatred’s insidious malice truly is, and from the loathsome, vile despite of the divine is a Godslayer born.

Only a being who devotes the entirety of it's soul to the opposition and destruction of the divine can qualify to become a Godslayer. However, even with the sufficient deicidal impulses, an aspirant to godslaughter must spend long and darksome hours persuing ancient and reprehensible texts concerning the true nature of divinity and the inherent faults of the same.

A Godslayer is the anathema of all things that possess the Divine Spark. He is a brooding, morose entity that exists only as a cosmic murderer. He wields fell and terrible power beyond mortal or divine comprehension. Within his soul burns an imperishable flame of utter stygian hollowness punctuated solely by his total and uncompromising lack of piety. A Godslayer does not simply hate divine beings, as does an Ur-Priest, or disbelieve in them to mock their power, as does a Defiant of the Athar. No; he denounces their lordship with the esoterica of aeons-hidden deicidal elucidation, and the ichor of eternal beings stained indelibly into his blasphemous sword.

Godslayer’s come from a predominantly martial background, as magic is notoriously known to be a construct of the divine. Some Psychic Warriors who discover secrets of divine failure take up the Godslayer’s loathsome mantle, however, their ranks are dominated primarily by Blackguards, Paladins of Tyranny and Slaughter, Ur-Priests, Defiants, and Warriors of Darkness.

Anathema Cloak: (Su) A Godslayer is a void upon the divine matrix that underlies the Multiverse. He is effectively invisible to a god’s deification senses and cannot be detected by the likes of Remote Sensing or Portfolio Sense, should he come into range of either.

Antidivinty: (Ex) A Godslayer knows the cosmic secrets that fuel a deity’s power and is resistant to their inherent divinity. He takes reduced damage from divine sources such as a god’s Divine Blast or a Flame Strike spell equal to his Hit Dice x2.

Favored Enemy (Gods): (Ex) A Godslayer knows how to kill gods and excels at fighting them. He gains a +2 to attack and damage rolls against divine beings, including the Proxies or Avatars of a deity. This also allows him to qualify for the Bane of Enemies and Death of Enemies Epic Feats, only for Gods, even if he has no other favored enemies. These bonuses increase by +2 for every 2 Godslayer levels beyond 2.

Divine Spell Resistance: (Ex) A Godslayer is preternaturally inured to divine magic thanks to his despicable training. He gains a Spell Resistance of 16 + his Hit Dice against all spells cast by deities.

Smite Gods: (Ex) A Godslayer can infuse his strikes with anathematic energies 1/day at level 2. When using this ability, he gains a bonus to his Attack Rolls equal to his Charisma Modifier and deals extra vile damage on his Damage Rolls equal to his Godslayer class levels x his opponent's Divine Rank against any God, Cosmic Entity, Avatar, or Proxy. He gains one extra use of this ability per day every 2nd level beyond 2nd.

Parallax Distortion: (Su) Once per day, starting at 5th level, a Godslayer may generate a field of suppressive energy that interferes with a divine being’s access to the Arcane Weave. This effect acts like an Antimagic Field centered on the Godslayer, cast by a Wizard of the Godslayer’s Hit Dice. However, this field only effects beings with Divine Rank and radiates form the Godslayer, not impeding him in the slightest. A deity affected by this ability receives a Rank Check (DC 10 + Character Level + Charisma Modifier) to nullify this ability's effects each round. The effect lasts 10 minutes per Godslayer level. A Godslayer receives an extra use of this ability at every 10 levels beyond fifth. (15th, 25th, 35th, etc.)

Atheist Paroxysm: (Su) Once per day, a 7th level Godslayer can emit an inhibitive sphere of apostolic anti-divinity. This field emanates from the Godslayer and stretches for 10 ft. per Godslayer level. In order to affect anything inside the field (through the use of a spell-like ability, Salient Divine Ability, or anything that seems directly from the divinity of the deity, such as Domain Powers), the deity must succeed with a rank check (DC 10+½ Character level + Charisma bonus) each time it tries to affect anything inside the field. Atheist Paroxysm lasts for 1 round per level of Godslayer the godslayer has. A Godslayer receives an extra use of this ability at every 5 levels beyond 7th. (12th, 17th, 22nd, etc.)

God slaughter: (Su) A 9th level Godslayer is so mightily steeped in the lore of Divinity that he can openly defy and challenge divine entities as can no other mortal. He can make Rank Checks against deities or cosmic entities as if he had a virtual divine rank equal to his Godslayer class level. After 20 levels, this bonus instead increases at a rate of 1 every 3 Godslayer classes, reflecting the massive divine power contained by Overgods and the like, whose divinity is intrinsic to the nature of Creation itself.

God blight: (Su) At 10th level, a Godslayer becomes a true bane of the divine, a theological nightmare that warps the nature of Divinity itself. Whenever he is in an area that would be affected by a deity's Divine Aura, the deity in question loses all Divine Bonuses to their Ac, Checks, Saves, Attacks, etc, and instead gains a Divine Penalty equal to the same of amount. In addition, the Godslayer gains an Anti-divine Bonus to all of his Ac, Checks, Saves, Attacks, etc, equal to the opposing god's Divine Rank. This ability can negate up to 1 Divine Rank per Godslayer Level and may spread amongst as many deities as fall into the affected area.

A Godslayer, for one reason or another, will meticulouslly hunt down and kill any being of divine rank, regardless of their alignment or purpose. Acting as an unrelenting force of nature, shrugging off divine blasts as if they were nothing. Godslayers have one joy in combat besides killing a deity, and thats scaring them. As most deities have penalties to sense motive while in a Godslayer's presence, Godslayer's enjoy intimidating them, forcing deities to continually back away in fear. If a deity were ever to flee, a rare occurence, and the Godslayer could not locate them, then a Godslayer's next goal is to slowly but surely kill every single worshipper of the deity he's hunting.

Combat: A Godslayer works similar to a ranger. Staying back until his prey of choice appears, then it's his time to shine.

Advancement: Godslayer's can multiclass as anything, but few enter spellcasting classes.

Resources: In a large pantheon, it's possible for small groups of Godslayers to get together, but there is no organization of any type.

Beings who take this class fit in as tyrants of legions of undead and ur-priests.

NPC Reactions: With terror. Even evil aligned creatures cringe at the thought of someone who laughs maniacally while slaughtering deities.

Characters with ranks in Knowledge (Religion) can research Godslayers to learn more about them. When a character makes a skill check, read or paraphrase the following, including information from lower DCs.