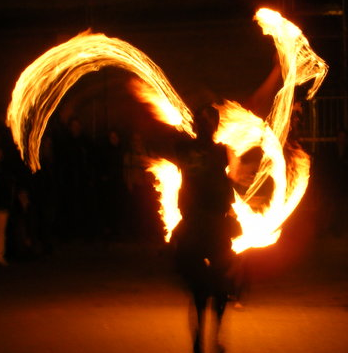 Flame Crusaders burn things. And they're damn good at it.

Flame Crusaders are those who have become one with fire. They're not so much a part of it that they're physical form changes, but they gain a mastery of it unparalleled by most other beings.

Flame Crusaders can be from any background. Those who have angered a powerful being are just as likely to be Flame Crusaders as those who seek the powers of fire on their own. The most important abilities for a Flame Crusader are Strength and Dexterity for combat, Wisdom (for certain skills), and Constitution (for hit points).

All of the following are class features of the Flame Crusader.

Fire Specialization (Su): A Flame Crusader chooses 1 type of fire damage from Divine Fire, Hellfire, or Plasma Fire when he becomes 1st level. All fire damage that the Flame Crusader deals due to class features (other than damage dealt by his Sphere Spells) become this type of damage, and are not subject to Fire Resistance.

Breath Fire (Su): Upon reaching 2nd level, a Flame Crusader gains the ability to breath fire. The fire creates a 15 ft. x 15 ft. blast area where at least 1 square must be adjacent to the Flame Crusader (Reflex DC for half damage: 10 + 1/2 Flame Crusader level + Con mod). The size of this blast increases by 5 ft. x 5 ft. every other level up to 8th (Blast 30 ft.).

Ignite Others: The Flame Crusader can spend a full action to light 1 target within close range on fire. Unattended objects get no saving throw, but living subjects and objects that are being carried or held can make a Will or Relfex (subject's choice) saving throw (DC: The Flame Crusader's ranks in Intimidate) to avoid being lit on fire. If the flame is put out, a Flame Crusader can spend an Immediate Action to rekindle it immediately (treating the subject as though the flame were never actually put out. There is no save for this.), but may only take a partial action during his next turn.

Ignite Weapons: The Flame Crusader may use a standard action to light his weapon on fire. The weapon gives off light like a torch (20 ft. illumination), and is treated as flaming (attacks made with the weapon deal 1d6 extra fire damage). When dispelled with dispel magic, greater dispel magic, or cancelled with a spell with the [Cold] Descriptor, the flame goes out. However, the Flame Crusader can simply reignite his blade as a standard action. When taken into an antimagic field, the flame also goes out and the Flame Crusader cannot use his ability until he leaves. But the weapon reignites itself once it exits the antimagic field (so long as the Flame Crusader is still holding on to it). These effects only work for weapons that the Flame Crusader is holding, or his unarmed attacks, only one weapon may be affected at a time, and this does not stack for weapons that are already treated as flaming.

Greater Ignite (Su): At 6th level, a Flame Crusader increases the power of his Ignite specialization:

Greater Ignite Others: This replaces Ignite Others. The Flame Crusader picks either Reflex or Will when he gains this class feature. As a move-equivalent action, a Flame Crusader can target anything within medium range and light it on fire once per round. Unattended objects do not get a saving throw, but attended objects or creatures get a Reflex or Will saving throw (the Flame Crusader designated this when he gained the class feature) to avoid being lit on fire (DC: The Flame Crusader's ranks in Intimidate). If the fire is put out, a Flame Crusader may spend an Immediate Action to rekindle the flame (treating the subject as though the flame were never actually put out. There is no save for this.), but may only take a partial action during his next turn.

Fire Immunity (Ex): At 7th level, a Flame Crusader gains Fire Immunity, so that he takes no damage from fire. He also gains vulnerability to cold, which means he takes half again as much (+50%) damage as normal from cold, regardless of whether a saving throw is allowed, or if the save is a success or failure.

Elemental Shape (Sp): When he reaches 8th level, a Flame Crusader gains the ability to tranform himself into a fire elemental once per day as per the spell polymorph self. He cannot take any other form, though he may assume the form of a small, medium, or large fire elemental, and does not suffer the normal disorientation penalty. If a character's code of conduct prohibits this transformation, he can instead use wall of fire once per day per three levels of Flame Crusader he has.

Fire Shield (Sp): At 10th level, the Flame Crusader gains a passive control over fire that manifests itself as a shield of flame. This is treated as fire shield (Warm Shield) where the Flame Crusader's level is treated as his caster level, and can be turned off as a free action. However, it requires a standard action to reignite.

Elemental Swarm (Su): At 10th level, a Flame Crusader may use the spell elemental swarm once per day to summon fire elementals only as a Druid of his level. The durations between the appearances of elementals is also halved.

Epic Ignite (Su): A 10th level Flame Crusader upgrades his Ignite specialization to one of the following:

Epic Ignite Others: This builds off of Greater Ignite Others. A Flame Crusader with this ability also gains a 5 ft. radius passive aura of flame. Aside from his mount and objects on his person, flammable things will burn and objects that melt in fire will melt. Those within the aura take 1d6 + the Flame Crusader's BAB + his Charisma mod (if positive) damage (Reflex save for half). A Flame Crusader can deactivate the aura as a free action, but must spend a standard action to bring it back.

Epic Ignite Weapons: This builds off of Greater Ignite Weapons. Though he does not make his blade any more powerful, a Flame Crusader who has specialized in using weaponry all the time is now a combatant to behold. He increases his threat range by 2 (after calculating other threat range increases, such as keen weapons.) and increases his critical multiplier by 1 for weapons that he uses, as long as he is proficient in them and has used the weapon to deal fire damage before.

Combat: Flame Crusaders are strongly attached to fire, and strongly desire to add their ability to burn things into every combat. The common Flame Crusader strategy is to light their opponents or opponents' possesions on fire and then run up and attack those dealing with the flames. If a creature has fire resistance, Flame Crusaders usually leave it alone, or may befriend it (they hold respect for those with similar powers to them).

Advancement: Flame Crusaders usually come from the ranks of paladins, fighters, knights, and barbarians, and may go back into that class if he decides to end his work as a Flame Crusader. Flame Crusaders are not recommended to class into spellcasting-intensive classes, because the strategies of the two just don't coexist well.

Resources: Flame Crusaders are usually isolated from each other, due to their rarity. They develop a respect, but not empathy for others of their kind, and will kindly cooperate with other Flame Crusaders; they just won't create guilds or anything of the sort. Flame Crusaders can expect to recieve attention and (maybe) even respect from creatures of fire, such as Fire Elementals, Gold and Red Dragons, Efreets, Salamanders, Magmins, and the like.

Flame Crusaders in the World[edit]

Flame Crusaders are not always crusading. They're usually lonely outcasts from a society that doesn't understand them. Lawful Flame Crusaders enlist to fight with powerful Lawful beings (deities, powerful kings, celestials or devils), while Chaotic Flame Crusaders live lives of constant adventure, spending their time in any way that doesn't involve following rules. Flame Crusaders are also well-known for their vendettas, and can be found in pursuit of certain figures to obtain vengeance for some wrongdoing (commonly their creation. After all, burning alive for an hour isn't well-known to cause cheerfulness)

NPC Reactions: Flame Crusaders are usually avoided due to stories (usually overexaggerated ones) that tell of the havoc they have wreaked over the many planes. They aren't always feared, but people are usually wary of them (especially when their body lights on fire or they ignite an object by staring at it.).

Characters with ranks in Knowledge (Arcane) or Knowledge (The planes) can research Flame Crusaders to learn more about them. When a character makes a skill check, read or paraphrase the following, including information from lower DCs.

Flame Crusaders are commonly found in the Ashen Coast region, being followers of Vok, the Aesirean god of fire. They are viewed as if they are cultists, but they enjoy varying reputations amongst the people, as Flame Crusaders are as many good as there are bad.