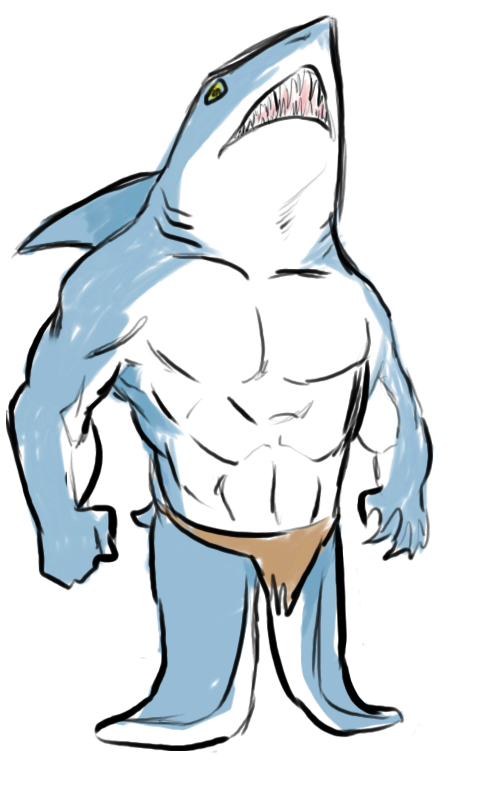 [[Featured Article Synopsis::     5th edition race: aarongar The aarongar are a race of fish-human hybrids created by a wizard diseased with madness. Combining human subjects with forcefully accumulated shark essences, the wizard conducted many a painful experiment on poor vagabonds kidnapped off the street for his own maddened amusement. He was honestly quite successful and turned many a poor sap into a weird monstrous mix of the two. Early creations did not live long, however, and many died from the conditions they were kept in. This did not bother the madman, as he simply continued to create more, with accumulating success. These experiments were carried on long even after the wizard died, as his works found willing ears within the reaches of dark circles. Disciples decided these creatures would be perfect enslaved soldiers for their dark armies.
They are mainly hostile creatures, and often do not take kindly to other species coming into their lands. Thus, they are reclusive and have little interaction with other races. Being territorial, they are prone to attack outsiders who come too close. This comes mainly out of their destructive instinct, which can be a struggle for them to control, when rage is so easy to elicit. However, at their best, they are just a bit recalcitrant to come out of their shells, showing their more human nature. They are known to undertake spiritual exercises to vent out their instinct and maintain acuity of the mind, particularly when away from home. Due to the improved control as aarongar progress as a race, people often just believe they are one of the other shark races without much of a second glance.