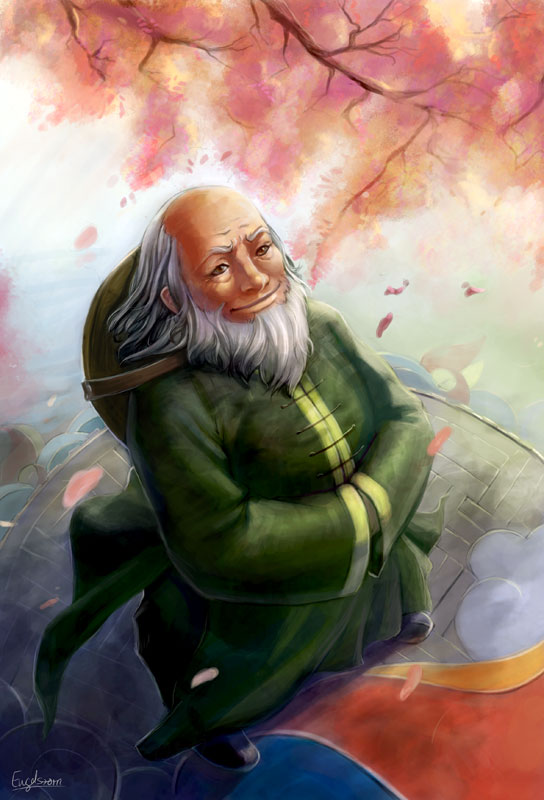 I'm sure after a bowl of noodles we'll all feel better.

An enlightened soul is a monk who, having found enlightenment, has realized how precious all life truly is, how full of potential, no matter how far fallen from grace. As such, she is deeply opposed to violence or pain of any sort, and is particularly horrified by the prospect of taking another’s life. Those who take this to mean that an Enlightened Soul is no longer a threat in battle are deluded, and are liable to discover how painlessly their own body can be destroyed without losing life.

The path of an enlightened soul is one taken by perhaps a handful of people each century, of whom perhaps a single soul each century will truly realize that he has broken from the usual way of the monk. As such, it is nearly unheard of for anyone to purposefully become an enlightened soul. It may be possible for others to find their way to this road, but only with guidance. Wisdom is essential for many of her abilities. Charisma is frequently useful to convince others to find a peaceful path. And Dexterity helps keep her alive when her charisma proves insufficient.

All of the following are class features of the Enlightened Soul.

Compassion (Ex): An enlightened soul sees potential for goodness everywhere, even in the most evil of foes. Consequently, she strives to transcend the brutality found in most traditional fighting styles that seeks only to rend, crush, and destroy, but rather to incapacitate temporarily by striking at pressure points and along chi lines, and has found the means to do so effectively. The enlightened soul can deal nonlethal damage with any weapon at no penalty. Further, when dealing non-lethal damage, the enlightened soul may use her Wisdom modifier, rather than Strength modifier, on attack rolls.

Merciful Strike (Ex): An enlightened soul does not seek to destroy their enemies, but rather to prevent their enemies from destroying anyone else. Once per day per class level, an enlightened soul may declare their next attack to be a merciful strike. If her attack connects, rather than inflicting damage, she chooses an ability. She inflicts 1d6 of ability damage to that ability (Fortitude save halves for Strength and Constitution; Reflex save halves for Dexterity; Will save halves for Intelligence, Charisma, and Wisdom. DC 20+Enlightened Soul Level+Wisdom modifier in any case). This damage increases to 1d8 at level 4, 1d10 at level 8, 2d6 at level 12, 2d8 at level 16, and 2d10 at level 20.

Freedom from Desire (Ex): An Enlightened Soul has no use for the short-lived items which inspires greed, which in turn inspires more evil than all the rest of the world put together. When an enlightened soul’s carried items cumulatively weigh less than twenty pounds and are valued at less than 10000 gp, she receives a bonus equal to her enlightened soul level to Will saves. If less than fifteen pounds and less than 1000gp, she may apply this bonus to Reflex and Fortitude saves as well. If she carries less than ten pounds and less than 100gp, she gains a dodge bonus of her class level plus her wisdom modifier to Armor Class. Finally, if the items total to less than or equal to five pounds and less than 30gp, they gain Spell Resistance equal to their class level plus their Wisdom modifier (this stacks with Diamond Soul; if the Enlightened Soul does not have the Diamond Soul class ability, she instead gains Spell Resistance equal to 10 + her level + her Wisdom modifier). Equipped items are included in the weight and value count, but plot-related items and non-magical sentimental trinkets are not (DM's discretion).

Freedom from Suffering (Ex): The practice of emptying the soul from the body and existing in an ethereal state has long since been mastered; at fifth level, the Enlightened Soul gains the ability to retreat into their own mind. As a move action, an Enlightened Soul can make a DC 20 concentration check. If she succeeds, the Enlightened Soul enters a deep meditative state for any length of time (checks must be taken every minute, rolling a 1 does not constitute a critical failure; upon the failure of any check, the trance is broken). In this state, she is unable to take any actions. She is aware of the condition of her own body, but otherwise receives no sensory information. The Enlightened Soul gains Fast Healing 1 and Regeneration 1 while in this state (unholy and slashing weapons do regular damage). Finally, she may not die in this state; that is to say, when an Enlightened Soul hits -10 hit points, she does not die, but simply continues to lose hit points, which heal naturally on their own, and may be healed by supernatural means as well. If, however, this trance is broken while at -10 or less hit points, the Enlightened Soul immediately dies.

Ki Manipulation (Ex): Any pretentious fool can tell you that absolute power corrupts absolutely. Long years of experience, however, have given hope that the opposite may be true. When dealing with a repeatedly unrepentant evil character of level 20 or higher, who has been rendered docile, and who has shown no regret for evil actions, an enlightened soul may attempt to manipulate their ki. Once per month, through physical contact, the Enlightened Soul may allow her ki to flow into her opponent. In order to allow her ki to flow in such an unnatural manner, the Enlightened Soul must succeed in a DC 30 Concentration check to proceed. If she succeeds, she has entered his mind. She then makes repeated opposed will saves against her foe. If her opponent beats her twice in a row, she is expelled from his mind and loses 5 to all abilities, ex. Strength and Agility, until 2 extended rests are taken. If she beats her opponent four times in a row, he loses the use of all feats, all ability scores and skill ranks are halved (round up), and all class levels are replaced with an equal number of levels in Commoner.

An Enlightened Soul who purposefully commits an evil act or deals lethal damage cannot use any class features, and takes -1 morale penalty on all rolls until she confronts the issue. If she rationalizes her actions, she can take no more levels in enlightened soul, continues to receive a -1 penalty on all rolls, but regains the use of all class features. If she decides she was wrong, she regains use of class features, but she must succeed on three DC 20 concentration checks (an attempt can be made once per day) to forgive herself before the penalty is removed and more levels can be taken.

Combat: enlightened souls are dangerous if not deadly melee combatants, but their true strength lies in resisting an enemy’s magic.

Advancement: An enlightened soul will rarely multiclass, as by this point their class is their way of life. If they do multiclass, like the monk before them, they may not take any further levels of Enlightened Soul. Further, enlightened soul class levels stack with monk levels for the purpose of the Wholeness of Body, Diamond Soul, and Empty Body class features. An ex-Enlightened Soul may take levels in monk.

Resources: Since few enlightened souls even realize the differences between themselves and other epic monks, they generally have access to the same resources as a typical monk; namely their monastery, and the goodwill of most peace-loving beings.

Enlightened Souls in the World[edit]

Enlightened souls are unfortunately rare, given the incredible effort and non-combative mindset (which tends to forestall any such effort) required to become one. Where they have been, however, it is easy to see the effects of their actions, as they tend to leave a wake of self-confidence and motivation. Most travel alone if at all, as many spend most of their time with family, but in times of crisis, they recognize the need to work together with people of differing skill-sets and world-views.

Player Character Reactions: Enlightened souls typically do not relish the company of people who make a living of ending other’s lives, and often see a paladin smiting evil as unwarranted violence, and have been known to intercede on behalf of the smitten rather than aid the paladin. This frequently results in tense, if not violent, inter-party relations. Their skill in quickly debilitating opposing wizards and sorcerers, as well as being fantastic healers (in lieu of a cleric or druid) however, makes them invaluable to a party, if still frustratingly pacifistic.

Non Player Character Reactions: On the polar opposite of Player Character interaction, most Non Player Characters positively adore enlightened souls in comparison to other Player Characters if only because they’re actually treated as humans (even if they aren't), and are more often eager to fulfill quests of the "rebuild Jeffrey Spaulding's hut after the elephant destroyed it" variety. Enlightened Souls rarely have any difficulty finding a full plate of food or an open bed in any town.

Characters with ranks in Knowledge (getting stuff out of the DM) can research Enlightened Souls to learn more about them. When a character makes a skill check, read or paraphrase the following, including information from lower DCs. Game Masters can feel justified adjusting the DC to astronomic levels, given the scarcity of research regarding this class.

Enlightened Souls in the Game[edit]

Non Player Character Enlightened Souls make for a powerful ally or enemy, and are most frequently found, not on the battlefield or dungeon-crawling, but rather raising a family, tending a garden, teaching all who will listen, or, in extreme cases, trying to convince a government of its flaws. They are almost always physically ready for combat, but it will require great and powerful evidence to convince them to engage in combat. Fortunately for Player Character enlightened souls, Game Masters tend to have such powerful evidence nearby, frequently referred to as "the plot."

Sample Encounter: Exhausted from the adventures of the day, and far from the nearest town, the party begs hospitality from a simple farmer and his wife. The couple are more than generous, granting them each a fantastic meal, and giving up their own beds to make the party more comfortable. But in the middle of the night, they are attacked. Struggling to protect this simple farmer and his wife, the party springs into action. But the enemies are many, and fierce, and the parties old wounds are opening, their eyes scarcely possessing strength enough to stay open, when this simple farmer's wife enters the fray.