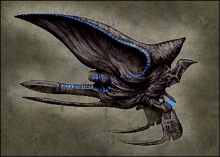 Hatched from floating egg mats, these tiny offspring of the Emperor Sea Strider are attracted to an energy source located beneath the adult's mouthless head. Hollow, lighter-than-air creatures, they cannot yet walk, but they fly about Darwin IV on their short wings, zipping around like the hummingbirds of Earth.

Emperor Sea Strider Nymphs are strictly non-combatants. Their only course of action in combat is to flee as fast and as direct towards their massive parents.

Immunity to Acid (Ex): Due to the caustic salt storms that plague the Amoebic Sea, Emperor Sea Strider Nymphs have adapted to the acidic nature of the extreme weather, granting them immunity to Acid.