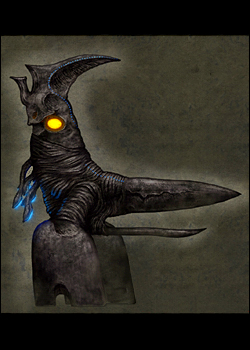 A bright golden light illuminates the darkness. After squinting your eyes you note that the light is coming from some massive glowing creature. The source of the light centered just below the mouthless head of this enormous bipedal purple beast. A pair of glowing eyes stares down at you as a deep bellow resonates from the beast. Lifting a massive foot and then slamming it into the gelatinous surface of the Amoebic Sea, its next stride taking out a chunk from the sea with it. Moments later, dozens of chirping insectile creatures orbit the mote of light propelled by tiny wings.

At over 60 feet tall, the sea strider is the largest life-form found on Darwin IV. It lives exclusively on the gelatinous surface of the Amoebic Sea, whose unique characteristics provide both support for the sea strider's enormous bulk and its sole source of food. The sea strider must maintain constant motion, feeding continuously on amoebic gel that it takes in through mouths on its feet. Behavioral displays include thunderous roars and blue biolights that accent its crested head, back and swaying tail.

Immunity to Acid (Ex): Do to the caustic salt storms that plague the Amoebic Sea, an Emperor Sea Strider has adapted to the acidic nature of the storms. Granting it immunity to Acid.

Trample (Ex): Reflex Half DC 35. The save DC is strength-based.

Skills: An Emperor Sea Strider has a +8 racial bonus on Listen and spot checks. As well, as a +8* bonus on Survival checks to discern direction on the Amoebic Sea. This bonus has already been factored into the statistics of the Emperor Sea Strider, for it only dwells on the Amoebic Sea and the only knowledge Survival check pertains to it and direction.