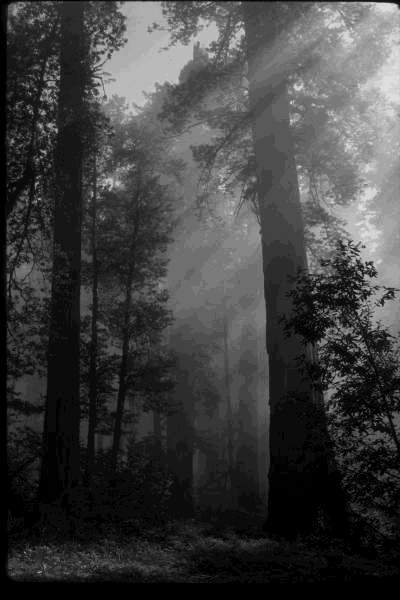 Image of the Dar'oka Deep

The Dar'oka forest is a realm unknown to the scholars of the world above, even to most denizens of the underdark, although tis one of the greatest sections of it. It is an unexplored, strangely forboding mass, its dark, mile-high trees stretching high above to the cavern-tops, and none was thought to live there...

Two-hundred years ago, a small raiding party of dapple-skinned elves burst from the trees and culled every Drow but one in a small settlement near the border of the forest before disappearing again. The Drow who survived was almost dead anyhow, and only managed to communicate with the others by casting a teleport spell that nearly killed him, transporting himself to the nearest temple of Lolth. In his dying breaths he told them what had happened.

The Drow saw this as a threat, and even sent a small army into the forest. Only one was returned, and he dead, with a note in elven script saying "We of the forest do not tolerate intruders."
Since then, the races of the Underdark have learnt to leave the forest alone.

Dar'oka elves are quiet and secluded, and will hardly ever talk among those not of their kind. However, in combat they are deadly accurate, and despite their silence, the sets of twins that the Dar'oka are always born in seem to be telepathically linked.

Dar'oka elves can sometimes be mistaken for Drow, although they are sworn enemies of their foul cousins. They are tall and slim, unlike their surface counterparts, and often stand at least the height of a human. They stand about 5 1/2- 6 1/2 feet tall, and weigh 100-150 pounds. There is little difference in build between males and females.

Like their surface elf counterparts, the Dar'oka are frail and graceful, but their skin is an odd, dappled pattern of light and dark greys and black. This changes as the elf matures.

Dar'oka elves prefer dark cloaks and soft clothes to anything else, although this is namely because of their habitat. Their eyes are usually green, their ears pointed, and their hair the same dappled pattern as their skin. Almost all Dar'oka elves are born as twins, with singles or triplets being a rare occurence.

Dar'oka elves are secluded and quiet, withdrawn from the rest of the world. The only one they truly trust is their twin (or triplets) and if they have none, they tend not to make friends easily.

Dar'oka elves are rarely evil, and almost as rarely good. They are chaotic, as are most elves, but neutral in all other aspects.

The Dar'oka forest is the only true territory of the Dar'oka elves, but they need none other. Indeed, you could have six men climb to different points on a tree in the forest, and still be so far away from one another they will not hear one another's shouts.

The forest is made up mostly of the Blackwood trees, the tallest of which reach a mile high and are only stopped by the cavern roof. These trees do not carry out photosynthesis, and all they need to survive is water. The Dar'oka cavern provides plenty of that, as it is a huge, steaming place, where condensed water runs down the rock walls. Indeed, several geyseers seemingly placed above the roof of the cavern pour boiling water into a series of caves in the rock above, from where it pours down, down, down into the forest, dropping into the huge lake at its centre.

It would take many years for me to recount just half of the rivers and trees and villages in this place, but let us just say of the capital city of the Dar'oka elves: Kaneimara.

Kaneimara is tha tallest tree in this... rain forest. It breaks through the ceiling of the cavern and is half a mile wide.

Inside and around this tree, the elves have constructed a city.

At the very top, where the boiling water gushes from the hole in the cavern roof, work the river-makers. These elves are powerful in society, individual expert twins picked from the strongest of elf children, trained in secret for all of their years, filtered from a pool of fifteen such candidate pairs and put through rigorous tests to see if they are ready.

If they survive these tests, the river makers are sent up into the boiling tunnels. They will slowly learn their way around the tunnels until tis second nature, and will discover, slowly, the ways out of the tunnels and into the sections above... and eventually... the upper world.

Dar'oka worship their god of the jungle-forest where they live as their main god. His name is Dar (Dar'oka means Dar's favoured), and he takes the form of an elven man with two branchlike horns growing from his head and hair formed from leaves. His favoured weapon is his wooden staff, and his domains are plant, earth and protection.

They also worship their Goddess of the jungle-forest, Dar's wife Emai. She is the patron goddess of female Dar'oka elves, and her priesthood includes no males. She takes the form of a beautiful female elf, and she is also the goddess of magic. Her domains are plant, luck and magic.

As well as this, they worship Dar's brother, Kari, the patron of male Dar'oka elves, whos' priesthood contains no females. He is also the patron of the boiling geysers and the tunnels above. He takes the form of a steaming, boiling pillar of water. His domains are water and fire.

Finally, the god, or rather gods of adolescent elves, hunting and lesser plants. They are the sons of Dar and Emai, known as Darem and Emdar. These two are the only twins in the pantheon, and both of them take the form of snakes or some other dangerous beast of the forest. Their domains are air, plant, animal, chaos, strength and war.

Dar'oka elven shares some traits with Elven, although tis much wilder and also alike to sylvan. They also have several words of their own, and their own alphabet.

Dar'oka elves use their age-names after they become adults. Example age names are:

There are only the River-makers who are seen above the ground usually, but twins can sometimes be seen in Drow cities disguised as them, or wandering the Underdark in search of adventure.