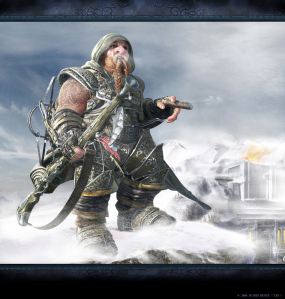 Like most dwarves, the Red Bellows dwarf is typically gruff and stoic, but extremely loyal to those who have earned his trust.

A Red Bellows dwarf stands just under 5' tall. They seem to have a permanent scowl on their face. Their hair color ranges from red to black, and their eyes are usually brown.

The Red Bellows dwarves do not get along with humans due to being enslaved by them, and they tolerate the gnomes. They are respectful of the other races, but will not readily trust them.

Most tend to lean Neutral.

They live in the western mountains of the Red Bellows, but a few can be found in all areas of Shekastkoré. There is one such outpost in the south-eastern portion of Batalagh named Greypeak.

They follow the Shekastkoréan Pantheon, typically favoring the gods Jord.

All speak Common, Gnome, and Dwarven. Most others speak at least one of the following fluently: Giant, Goblin, and Orc.

Their naming convention follows the naming style found in the Player's Handbook.