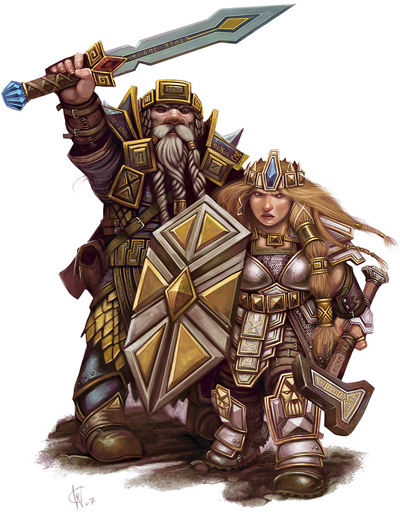 Master craftsmen of iron and stone, unyielding as the rock of which they were forged.

Forged from the bedrock of the world, dwarves are as stubborn and unyielding as the rock of which they were forged. Dwarves have a fierce and jealous love of gold and jewels that is matched by no other race. Though dwarves are the least magical race, they more than make up for their lack of magic with their tenacity and sheer toughness. Dwarves are among the most unyielding bastions against the darkness, second only to the elves in the defense against evil.

Play an dwarves if you want...

Dwarves are only about 40.5 ½ feet tall, they are broad and weigh as much as an adult human. Dwarves have the same range of complexions, eye and hair colors as humans, though they are rarely very pale and usually have ruddy skin tones. Male dwarves have long beards which they plat into elaborate patterns with gold beads. Females instead plat their hair (with similar gold beads) to show clan and ancestry. Dwarves take great pride in the craftsmanship of their weapons and armor, which are generally decorated with gold, jewels and intricate patterns.

Dwarves mature at about the same rate as humans do, but live for 150 years or more, and remain vigorous for all but the last years of their lives. Venerable dwarves have been known to life for more than 250 years.

The dwarves were forged from the bedrock of the world, and possess many qualities of the rock of which the were forged. Dwarves are as hard as steel and as unyielding as stone in the face of their foes. They are stubborn, standing firm in the face of even the greatest of foes. Dwarves are capable of taking all of the punishment that their foes can dish out and more. Dwarves value their ancestral traditions greatly, and will fight to the last to defend their ancestral homes.

Dwarves value their clan ties and ancestry greatly, and deeply respect the clan elders. Dwarves honor the long-dead founders of their clans and ancestral heroes, and are proud of the achievements of their ancestors. Dwarves greatly honor ancestral weaponry and armor, treating such artifacts with great respect.

Dwarves are the most pious of all races, seeking guidance from the gods far more than any other race. Dwarves look to the divine for guidance, hope and inspiration in the toughest of times. All dwarven communities have grand stone temples to the gods, and all but a few dwarves are pious followers of the gods. 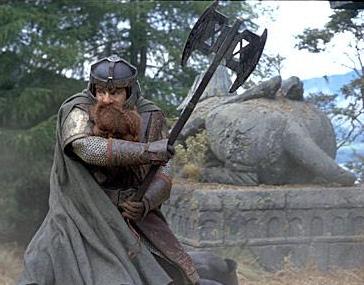 Dwarves have a famous saying; "never forget a grudge". This saying explains their attitude towards those who wrong them. Dwarves can hold grudges against individuals or entire races. The dwarves absolutely hate orcs, giants and goblins, who have wronged them many times over the ages of the world. Though dwarves do not get on well with elves, they do not hate them. Dwarves and elves have, on many occasions, united against common foes. Even so, few dwarves form friendships with elves, thinking them haughty or foolish.

Dwarves love gold and jewels more than anything else, guarding such treasures with their lives. Dwarves have a fierce and jealous love of precious metals, jewels and artifacts fashioned with skill. Though dwarves are the least magical of all races, they make up for their lack of magic with their ability to craft with a skill that only the most skilled elves can match.

Dwarves consider it to be the greatest honor and a sign of the deepest loyalty to stand beside a friend in battle or to protect them from harm. Dwarves honor those who have died protecting others from harm. Dwarves are among the staunchest of bastions against the darkness, unyielding in the face of the mightiest of evils.

Durin is a dwarf fighter, named after an ancestral hero of his clan by the clan elders. He is believed to be the reincarnation of the ancient dwarf hero, and has therefore been trained to fight with great skill by the master warriors of his clan. Now he leads parties of dwarves against the ancestral enemies of his clan.

Dáin is a dwarf paladin and a devout follower of the gods. He wears his ancestral armor and carries his ancestral axe with great pride, willing his axe to cleave goblins once again. He vows to protect his friends with his life, even if it costs him his life.

Vistra is a dwarf cleric devoted to the gods. She follows the gods' every command, devoting herself to her duty as a cleric. She protects and heals the dwarves of her clan and their allies, and defends her people against the ancestral foes of the dwarves.