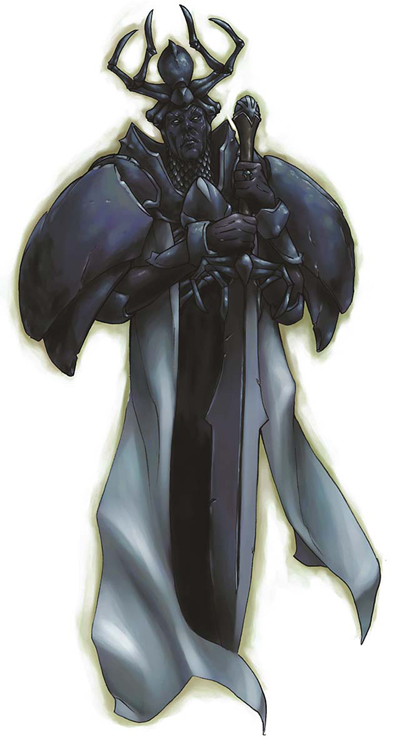 A mortal imbued with fiendish cruelty, the drow judicator is a knight most foul. This unholy warrior is steeped in the divine energy of Selvetarm, the Spider That Waits, self-appointed Champion of Lolth. Consort of demons and demonic arachnids, the drow judicator is hated and feared by all, especially other male drow who are jealous of the heights of power to which he has risen. Drow judicators must make an unholy pledge to Selvetarm and then survive the rites of entry to adopt the prestige class. At least a little schooling in spellcasting is required, but only the toughest and meanest sorcerers and wizards can survive the entry requirements. Clerics often attempt to take on the drow judicator's mantle as well as do fighters, rangers, and rogues who have taken levels in spellcasting classes.

Typically, an NPC drow judicator serves a higher-ranking cleric of Lolth, although he chafes to be the sole authority. Drow judicators and assassins usually fill out the ranks of a high priestess's hand-picked murder team.

To become a drow judicator, a character must fulfill all the following criteria.

Special: The candidate must survive the rites of entry administered by clerics of Selvetarm or Lolth.

All of the following are features of the drow judicator prestige class.

Spells per Day: At every third drow judicator level, the character gains new spells per day (and spells known, if applicable) as if he had also gained a level in a spellcasting class to which he belonged before adding the prestige class level (for male drow, this is usually an arcane spellcasting class, although although male clerics of Selvetarm sometimes become drow judicators). He does not, however, gain any other benefit a character of that class would have gained (improved chance of turning or rebuking undead, metamagic or item creation feats, and the like). If the character had more than one spellcasting class before becoming a drow judicator, the player must decide to which class to ass each drow judicator level for the purpose of determining spells per day, spells known, and overall caster level.

War Strike (Su): War is the ultimate expression of Selvetarm's power, so its lessons are the very first that the drow judicator learns. Beginning at 1st level, he can attempt a war strike with one normal melee attack. If he hits, he deals 2d6 points of Constitution damage in addition to his regular damage. The target may attempt a fortitude save (DC 10 + drow judicator level + drow judicator's Cha modifier) to halve the Constitution damage. This ability is usable once per day.

Selvetarm's Blessing (Ex): at 2nd level and above, a drow judicator receives a +3 profane bonus on all saving throws.

Selvetarm's Wrath (Su): Beginning at 4th level, a drow judicator may attempt to deliver extra damage with one normal melee attack. On a successful attack, he deals 1 extra point of damage per drow judicator level. For example, and 8th level drow judicator armed with a longsword deals 1d8+8 points of damage, plus any additional bonuses (for high Strength. magical effects, or the like) that would normally apply. This ability is usable once per day at 4th level, twice per day 7th level, and three times per day at 10th level.

Spider Servant: At 5th level or above, a drow judicator can call a spiderlike monster to serve him. He may choose to call an 8-HD Large fiendish monstrous spider, a fiendish sword spider, a myrlochar, or a phase spider. (See the Monster Manual or Monsters of Faerun for these creatures' statistics.) He can use this spider servant as a guardian or a mount, at his discrestion. The spider servant gains HD and Special abilities based on the drow judicator's class level, as given on Table 3-5. The drow judicator may have only one spider servant at a time. Should his servant die, he may call for another after 24 hours. The new spider servant has all the accumulated abilities due a servant of the character's current drow judicator level.

Spider's Grace (Sp): At 8th level, a drow judicator gains the ability to take on attributes of a spider for up to 10 minutes once per day. While this ability is active, the character can climb on surfaces as if subjected to a spider climb spell, and he receives a +4 insight bonus on Hide and Move Silently checks. He also gains a bite attack that deals 1d4 damage and is poisonous. The bite is a secondary natural weapon that can be used once per round at the drow judicators highest base attack bonus, wit the standard -5 penalty for a secondary attack. The fortitude save DC for the poison is 18 + the drow judicator's Con modifier, and it deals 1d6 of Strength damage for both its initial and secondary damage.

Judgment (Su): At 10th level, a drow judicator gains the ability to judge all creatures within 100 feet of him that he can see. Those he finds wanting are immediately targeted with a horrid wilting effect (caster level 18th; save DC 18 + drow judicator's Wis modifier). The drow judicator can base his decision on any parameters he chooses. This ability is usable once per day as a standard action.