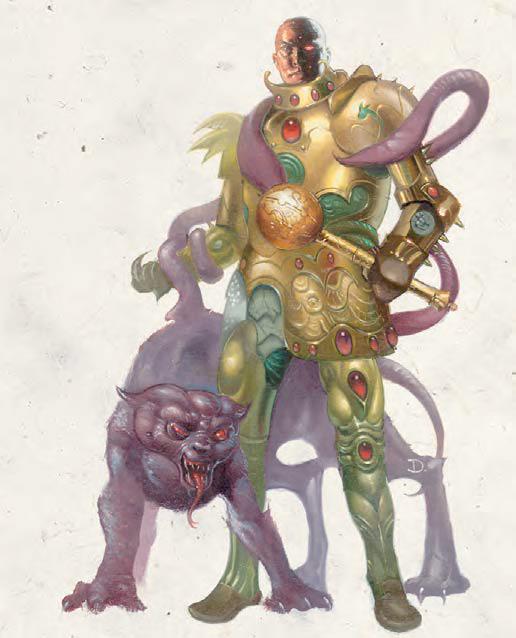 Dreadmasters are the ultimate tyrants. They seek to rule absolutely (next to, of course, Bane himself), preferably through terror and domination. They instill the fear of Bane in all, but especially in those who do not give at least lip service to his supremacy as a deity.

Dreadmasters tend to accumulate followers and build organizations - like churches or societies, or political bodies such as kingdoms, nations, or city-states - over which they can rule with an iron fist. They want to know everything that is going on, overseeing every detail with what they see as ruthless precision and others see as an obsessive need to control. They love to accumulate items that enhance their personal presence to better cow others, their physical strength to better beat the weak into submission, or their wisdom or mental faculties to better plot the doom of their enemies. Dreadmasters always have many enemies (whether real or imagined).

Clerics most often become dreadmasters, although wizards, sorcerers, monks with a passionate devotion to Bane or to dictatorship sometimes choose this path as well. Rogues, fighters, and rangers become dreadmasters less frequently, though they are often part of a dreadmaster's retinue. While it is theoretically possible for a lawful good character to become a dreadmaster, a dreadmaster is unlikely to remain so for long, and the abilities and ideals of the dreadmaster lends itself most favorably to lawful neutral or (especially) lawful evil.

Adaptation: Although originally titled with Bane in mind, this prestige class doesn't have to be dedicated to him, and can easily be adapted to other deities espousing ideals of dictatorship or rule of absolute law or principle. While the prestige class can advance spellcasting of any type, note the alternative bonuses for non-spellcasters.

To qualify to become a dreadmaster, a character must fulfill all the following criteria.

All of the following are Class Features of the dreadmaster prestige class.

Weapon and Armor Proficiency: A dreadmaster gains no additional proficiency with any weapon or armor.

Spells per Day/Spells Known: When a dreadmaster level is gained, the character gains new spells per day (and spells known, if applicable) as if she had also gained a level in whatever spellcasting class he belonged to before he added the prestige class. He does not, however, gain any other benefit a character of that class would have gained. This essentially means that he adds the level of dreadmaster to the level of whatever other spellcasting class the character has, then determines spells per day and spells known accordingly.

If a character had more than one spellcasting class before he became a dreadmaster, the player must decide which class to assign each level of dreadmaster for the purpose of determining spells per day and spells known.

Dominating Aura (Su): A dreadmaster is immune to fear (magical or otherwise). Enemies within 20 feet of a dreadmaster suffer a -4 morale penalty on saving throws against fear effects. The radius of this aura increases at 3rd, 5th, 7th, and 9th level.

Insidious Insight (Ex): A dreadmaster has a knack for ferreting out what others are up to so that he can more effectively keep control. A dreadmasters receives a +2 bonus on Sense Motive and Gather Information checks. Additionally, if the character has no spellcaster levels whatsoever (and thus cannot add spells per day or spells known), the base attack bonus of the dreadmaster instead becomes that of a Fighter of equal level (+1 at level 1, +2 at level 2, and so on).

Bonus Domain: Upon reaching 2nd level a dreadmaster gains access to a bonus domain, choosing one out of the following: Domination, Hatred, Law, Nobility, Planning, or Tyranny. The dreadmaster gains the granted power associated with the domain he chooses, and access to the spells in that domain as domain spells. If the character has no spellcasting levels whatsoever (and thus cannot add spells per day or spells known), the dreadmaster may instead choose to take a bonus feat for which he meets the prerequisites.

Rodcraft (Ex): Dreadmasters have an affinity for magic rods, seeing them as an extension of the symbolism of the divine scepter of rulership that is also seen in Bane's favored weapon, the morningstar. Beginning at 4th level, when a dreadmaster makes a rod, the DCs for saving throws against the powers of rods they craft are two higher than would be those made by a non-dreadmaster crafter of comparable level. They especially love to make rods of rulership, enemy detection, and lordly might. Note that this does not confer the ability to make magic rods. Additionally, if the character has no spellcasting levels whatsoever (and thus cannot add spells per day or spells known), the dreadmaster may instead choose to gain Weapon Focus (Morningstar) and treat all morningstars as if they had the Keen magic enhancement when wielded.