A race born from Bahamut to combat Tiamats spawn. 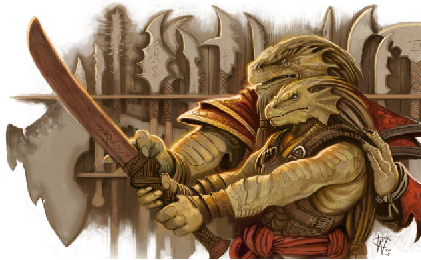 An Adolescent and Adult Dragon Born.

The Dragon god Bahamut in his war with his sister Tiamat, combats her spawn with his own warriors: the Dragonborn, Bahamut calls to the individual and is asked to take up arms against evil dragonkind. The individual then undergoes the rite of rebirth to shed his original race and be reborn as one of Bahamuts many emisarys.

The Dragonborn are a powerful race, powerful, yet somehow graceful they are a race of proud honour bound warriors stuck in a sad, seemingly never ending war between the spawn of Tiamat.

Play a Dragonborn if you want...

Dragonborn are tall and powerful statues their physical form barely paying tribute to their natural strength and endurance, each Dragonborn is a example of draconic power, each ones physical features varying based on the strength of the blood that courses through their veins. Most are between six and seven feet tall. A dragonborn is not created through natural births, they are reborn at an adult age, there can be no dragonborn younger than 200 years.

Dragonborn have a life span of about 400 years, however most die young in the fight against Tiamat.

The Dragonborn are among the most honourable races in the world, and have been around as long as some of the oldest of the worlds races.

A Dragonborn’s entire civilization is based around honor and heroic deeds, though not everyone thinks of this when they think of the Dragonborn. Due to the nature of their warfare many look down on the Dragonborn seeing them as more of a primal uncivilized race like the Orcs only seeing the constant battle between each individual clan and the damage such battles have caused.

This has caused mistrust and distaste between the Dragonborn and the other races many of which see the appearance of a Dragonborn as a sign that trouble is brewing. Dragonborn do however have civility in their lives for a Dragonborn there is nothing more important than the protection of their Clan name and the people they care about.

Friendship from Dragonborn is a matter of great importance to the race as they are often so focused on the strength and destruction of Tiamats spawn that to accept a member of another race as one of their own is a promise of eternal protection and respect. These situations tend to only happen when a Dragonborn has left his clan to travel the world however, an act that is often seen as treason and betrayal, making such friendships illegitimate to the clan in which such Dragonborn originated.

This is not so say that all Dragonborn who leave their clan are abandoning their people, knowing that those who abandon their clan will have a life of being hunted down ahead of them many of the races younger less experienced warriors leave the clan on a journey of self exploration and training, Knowing that should they return to their clan lands that they would be better able to defend their friends and family as well as their clans and their own honor.

Torinn is a dragonborn warlord, after his entire clan being wiped out he left his home lands to seeking greater power, so that one day he would return with a new clan of his own and return honor to his name.

Thava is a dragonborn sorcerer, exiled after a terrible accident during her training she wanders the worlds seeking out teachers of arcane power so that one day she may return to her clan and clear her name as an incompetent spell caster.

Patrin is a dragonborn fighter, after his father abandoned the clan it was he who would be charged with tracking him down and slaying him. It was with this journey Patrin would prove he has what it takes to be a warrior among his clan.