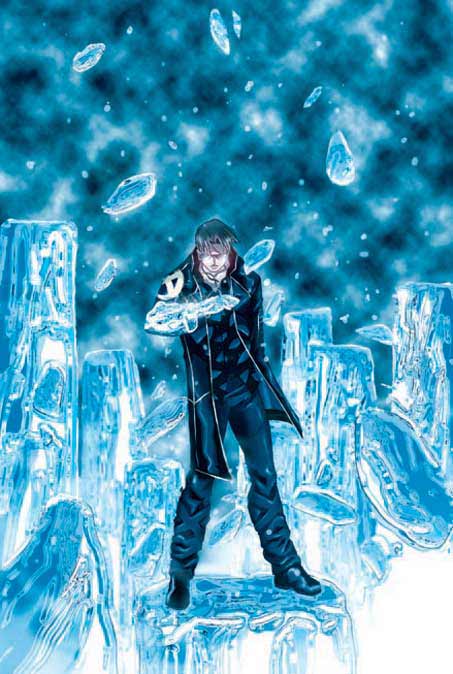 Sometimes those with an especially strong connection to magic become sorcerers, bards, or similar. However, their magic is limited by their own strength and by their mortal frame. Sometimes, a body is ill prepared to handle the magic inside of them, the energy goes out of control, and begins to... consume them.

Those who are ill prepared for magic and are consumed by the power of cold magic head down the path of the Direfrost Knight.

While some may pursue it purposefully, the act of becoming a Direfrost Knight is usually seen as a disease or a magical curse, and those growing into this power are not always willing. They are usually the result of when a multiclass character levels in sorcerer and finds that the spellcasting power they have gained is a power they have not learned to control.

All of the following are class features of the Direfrost Knight.

Augment to Frost (Su): Cold magic runs through every essence of their being, and even alters the properties of magic around him. When employing an item which uses an element, such as a Flaming Sword or a Wand of Lightning Bolt, the Direfrost Knight may choose to have all elemental damage changed to cold damage instead. This only applies to magical items, and not the Direfrost Knight's own spells. Changing the elemental property of an item is a standard action, but it remains altered until shifted back or someone else uses the item.

Magical Being: Being literally bound to their own magic powers, they maintain some casting force behind their being. While they no longer gain spell levels, they may add their Direfrost Knight class level to the caster level of the spells from their qualifying spell-using class.

Magic Corruption: The effects of the cold magic warp the body and soul of the Direfrost Knight in question. At 1st level and every two levels, they may select a power from the list below, as their body grows more and more inhuman.

Hydrostasis (Ex): When facing enemies which are composed primarily of water, such as water elementals and oozes, you deal additional damage. All damage from your Ice Strike, Aura of Dire Winter, and other class abilities have their die increased to d8. On a natural 20, the water based creature must make a Fortitude save, DC 10 + 1/2 HD + Cha or be rendered immobile until they take at least 5 points of fire damage, or make a DC 20 Strength check to break free of their icy prison.

Ice Beam (Sp): As a ranged touch attack done as a standard action, the Direfrost Knight can shoot a bolt of freezing blue energy out to a range of 60 ft at will, dealing 1d6 cold damage to their target. This spell-like ability is similar to a warlock's eldritch blast. This ability may be selected multiple times, each time it adds an additional +1d6 damage. The Ice Strike ability is not added to the damage of Ice Beam.

Those who select Ice Beam usually have a constant mist around their hands as the water vapor in the air crystallizes.

Ice Rime (Sp): The Direfrost Knight gains the effect of a Grease spell able to be used every 1d4 rounds. Instead of Grease, it is a thin slick layer of ice which envelops the area. The saving throw is based on the primary ability score of their qualifying spellcasting class (typically Charisma).

Ice Weapon (Ex): The Direfrost Knight is able to create any weapon they are proficient in with a move action. This weapon is made out of ice, but deals damage as normal for a weapon of it's kind. If attacked or sundered, its hardness is ignored when being struck with fire damage, and it is immune to cold damage. If the Direfrost Knight possesses the Quick Draw feat, they may create the weapon as a free action instead. If sundered, the broken weapon explodes on its attacker, dealing the Direfrost Knight's ice strike damage to its attacker.

The Ice Weapon is considered a magic weapon for the purpose of overcoming damage reduction and striking incorporeal creatures.

Those with the Skate power usually leave small cold puddles in their wake, as the icy rime beneeth them melts away.

Aura of Winter (Su): The cold energy of the Direfrost Knight begins to warp the environment he stands in. At level 2, the Direfrost Knight cools the temperature by 1 step to the next lowest bracket, out to a distance of 60 ft. This is a constant chill which follows him and while it can be suppressed, it returns the next round that they are not concentrating. This is beneficial when moving through a desert... and troublesome to others when parties are trying to stave off the cold.

Ice Strike (Su): At 3rd level, the cold energy escapes the body of the Direfrost Knight, wrapping around in complex coils of blue energy when he is focused or angry. The Direfrost Knight's natural weapons, unarmed strikes, and melee weapon attacks are likewise encased in this dangerous blue energy, dealing an additional 1d6 cold damage on hit. If unarmed, they may make a touch attack which deals 1d6 cold damage as well.

Every 3 levels after, at 6th, 9th, and beyond, they gain an additional +1d6 cold damage to their attacks.

Fire Inhibitor (Su): At 5th level the Aura of Winter effect gains an additional effect of disrupting fire spells and boosting cold spells. Allies who cast cold spells in the area have their caster level increased by 2, while fire spells cast by either allies or enemies have the caster level decreased by 2. This effect also spreads out to 60 ft. and is active whenever the Aura of Winter is.

Aura of Dire Winter (Su): At 8th level, a blizzard surrounds the Direfrost Knight whenever he wishes. The Direfrost Knight gains 20% concealment from the swirling cold winds and snow, and it deals 1d6 cold damage to anyone standing within 5 ft. of the Direfrost Knight on their turn. This effect may be turned off and on as a move action, separate from the Aura of Winter effect, and does not require concentration to suppress.

Elemental Transformation: At 10th level the process of warping is complete and the Direfrost Knight loses their original self. His type changes to Elemental, and he gains the Cold subtype, gaining immunity to cold damage and a vulnerability to fire damage. He does no need to eat, sleep, or breath, he gains darkvision out to 60 feet, immunity to poison, sleep, paralysis, stunning, critical hits, and flanking. Unlike other elementals, the Direfrost Knight can still be brought back from the dead as if he were a member of his previous creature type. They now appear more like an elemental than they do a human.

Combat: A Direfrost Knight's magical power is out of control, and so few bother with the limited casting they know. Instead they channel the wild energy into their body, forming a potent defense and melee attacks rimed with magical ice.

Advancement: Those who become Direfrost Knights can choose many paths, those most are martial oriented to take advantage of their Ice Strike ability and inability to be harmed by critical hits.

Resources: There is little hope for a Direfrost Knight to find aid. Many consider the condition to be a curse, and so they are left as incurable exiles, until their magic finally consumes them.

The Direfrost Knight is a loner, seeking for a cure, or perhaps delving deeper into this oddity discovered inside himself.

NPC Reactions: If the Direfrost Knight is encountered mid-transformation, he is usually considered a diseased person, shunned or pity. However, when the transformation is complete they are often mistaken for elementals, bringing a mix of worry, and confusion, as to why such a spirit is within this world.

Characters with ranks in Knowledge The Planes can research Direfrost Knights to learn more about them. When a character makes a skill check, read or paraphrase the following, including information from lower DCs.

Direfrost Knights in the Game[edit]

Direfrost Knights are changed fundamentally what they are. They do not learn how to be one so much as evolve into one.

Adaptation: Perhaps this is a curse, or a blessing, from a cold-oriented god or demon. The followers of said spirit could be Direfrost Knights. In which case, consider loosening the requirements to any casting class, or divine casting.

Sample Encounter: A Direfrost Knight has gone on a campaign to freeze the world in an endless ice age, by absorbing all of the world's heat. He hopes that by being bathed in warmth, he can stave off his 'disease'.