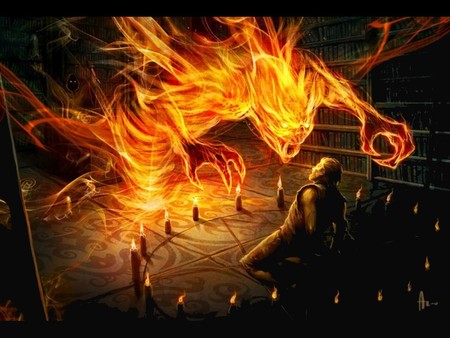 As the Demonbinder advances in level he gains the ability to control fiends; he also becomes more capable of controlling them and eventually becomes more fiendish himself.

Spellcasting: At each level, you gain new spells per day and an increase your caster level (and spells known, if applicable) as if you had also gained a level in a spellcasting class to which you belonged before adding the prestige class level. You do not, however, gain any other benefits a character of that class would have gained. If you had more than one spellcasting class before becoming a Demonbinder, you must decide to which class to add each level for the purpose of determining spells per day, caster level, and spells known.

Aura of Evil (Ex): The power of a Demonbinder’s aura of evil (see the detect evil spell) is equal to his class level plus his cleric level, if any.

Bind Fiends (Su): The most important ability of a Demon Binder. He may perform a variety of actions with this ability. He may use Planar Binding once per day with a caster level equal to his total HD + his Demonbinder level (counting demonbinder twice). To bind a fiend: the fiend must be helpless, the Demonbinder must make a circle (30 minutes) and perform a ceremony. The DC for the Binding is 10 + the fiend HD - you Demonbinder level - your wisdom modifier; having 10 or more ranks in Knowledge: Religion and Knowledge: the Planes grant you a +5 synergy bonus (stack together).

Infernal Summoner (Ex): At 2nd level, the Demonbinder gets +2 to caster level when attempting to summon evil outsiders. Furthermore, all neutral creatures that he summons become evil.

Resist Infernal Power (Ex): At 3rd level, The Demonbinder gets a +4 bonus to all of his saves against evil outsiders' spell-like abilities.

Enslave Fiends (Su): The Demonbinder may now use Dominate Monster (evil outsider only) as a Supernatural ability once per day.

Binder Apotheosis: At 5th level the Demonbinder mastery of binding has paid off. He is now immune to Evil outsiders' spell-like abilities. He also gains DR 5/Good. He is now treated as a Evil Outsider, but he can be raised normally.

Eternal Binding: At 5th level the Demonbinder may get a an evil outsider as a cohort. This Slave doesn't stack with any cohorts granted by the Leadership feat. The fiend must be 2HD lower than the Demonbinder's total character level. The fiend slave may get advancement into class levels and act like a cohort, and this slave is granted a new level when its master gains a level. You do not need to be one step away from the slave alignment, but ignore any penalty caused by cruelty or cohort death. The fiend needs to be summoned via the Bind Fiend class feature and be dominated with the Enslave Fiend Class feature.

If the Demonbinder becomes good, he loses all of his class features as he forsakes his power; a good person would never accept using the power of fiends. He regains full power if he becomes non-good again.

Combat: The Demonbinder is a summoner class, comparable to the thaumaturgist. However, they only affect evil outsiders with most of their abilities. They are still wizards, sorcerers, or whatever they were before becoming Demonbinders. cleric Demonbinders tend to be weaker than full Clerics due to the Demonbinder's low base attack bonus and hit dice.

Resources: Although many cults of Demonbinders exist, they praise different ideals. Many of these clans wage war against each other; some try to seal fiends and protect the mortals while others try to gain power through their enslavement of fiends.

NPC Reactions: NPCs tend to react badly to Demonbinders; many use the Bluff skill to be accepted or avoid being hunted down and burnt.

Characters with ranks in Knowledge (The Planes) or Knowledge (Religion) can research Demonbinders to learn more about them. When a character makes a skill check, read or paraphrase the following, including information from lower DCs.

Adaptation: Pretty easy to adapt, the Demonbinder fits in most campaigns where there are fiends around. They fit well into cults or wizard cabals.