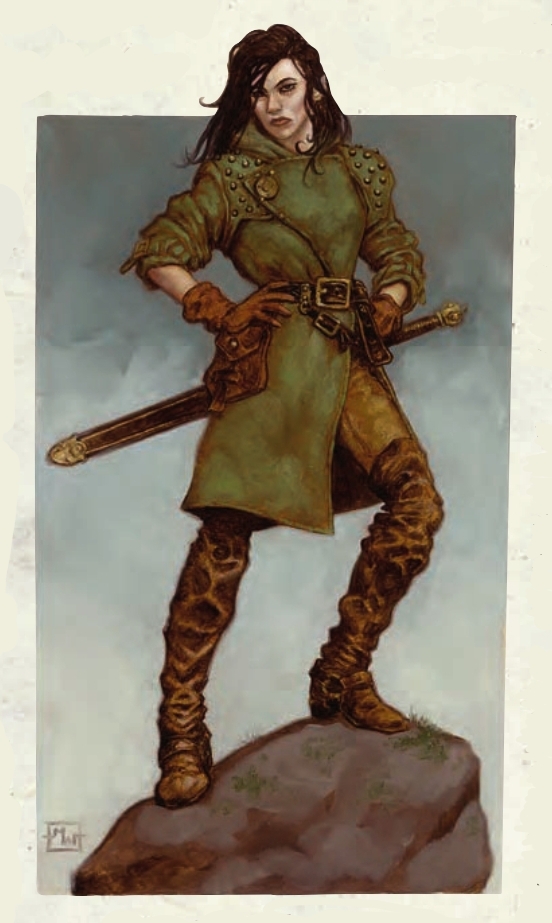 The Church of Mask is a hidden one across most of Faerûn. It is neither truly respected nor widely feared, yet has been known to wield considerable influence from the shadows, and those with knowledge and experience with the criminal underworld are often quick to caution against angering the faithful of Mask, the secretive guilds of the cities, and the canopied camps of the forests. In the shadowy priesthood of Mask, the demarchs and demarchesses of Mask examplify this whispered worry, their numbers drawn from catfoots and nightrunners, the faithful clerics of Mask active in the cities and wilderness, respectively. Those who take Mask as their patron deity are known as maskarrans, and although maskarrans have mostly been reduced to their central core of thieves and thieves' guilds, other shadowy individuals, courtiers, and diplomats have also been known to invoke his name. In areas of a single strong thieves' guild, the local temple or shrine to Mask is usually connected to the hidden guild hall via underground tunnels or sewers, but in large cities with competing guilds, the temple is most often a seperate underground location recognized as neutral ground by all sides.

Demarchs often rise to be not only both protectors and exploiters of thieves and bandits, but often become renowned urban burglars, rural brigands, or guild masters in their own right. Maskarran wear no badges of rank nor differing vestments, and priests of Mask are encouraged to hide their true nature and masquerade as other priests or commoners, with normal dress for clerics of mask similar to that of any merchant, craftsperson, or adventurer in the area. All maskarran priests and clerics pray at night in darkness or shadow.

Adaptation: Although originally titled with Mask in mind, this prestige class doesn't have to be about Mask. It works just as well with any thievery- or stealth-focused deity that favours darkness, avarice, and intrigue.

To qualify to become a demarch, a character must fulfill all the following criteria.

All of the following are Class Features of the demarch prestige class.

Weapon and Armor Proficiency: Demarchs gain no additional proficiency with any weapon or armor.

Spells per Day/Spells Known: When a demarch level is gained, the character gains new spells per day (and spells known, if applicable) as if he had also gained a level in whatever divine spellcasting class he belonged to before he added the prestige class. He does not, however, gain any other benefit a character of that class would have gained. This essentially means that he adds the level of demarch to the level of whatever other spellcasting class the character has, then determines spells per day and spells known accordingly.

If a character had more than one divine spellcasting class before he became a demarch, the player must decide which class to assign each level of demarch for the purpose of determining divine spells per day and spells known.

Aura of Anonymity (Su): A demarch leaves few impressions upon those they meet unless they want to, and even fewer upon those unexceptional souls they pass in the street. When a demarch is walking in a crowd of ten or more individuals, he gains a divine bonus equal to his demarch level to Disguise and Hide checks.

Ranged Legerdemain (Su): A demarch can perform one of the following class skills at a range of 30 feet: Disable Device, Open Lock, or Sleight of Hand. Working at a distance increases the normal skill check DC by 5 for each 10 feet, and a demarch cannot take 10 or take 20 on this check. Any object or mechanism to be manipulated must weigh 10 pounds or less. Should he wish it, a demarch can also use ranged legerdemain to replicate Open/Close and Mage Hand as spell-like abilities, with a caster level equal to his character level.

A demarch can use ranged legerdemain once per day, plus once per day for every 10 skill ranks he has invested (in total) in Disable Device, Open Lock, or Sleight of Hand.

Mask of Mask (Sp): At 2nd level, the demarch's motives and morality become almost impossible to discern magically, and a demarch often takes great care not to reveal the location of the halls and temples of the faithful. As an immediate action, a demarch may cast Undetectable Alignment as a spell-like ability at will. In addition, as a full action, a demarch may cast Nondetection as a spell-like ability a number of times equal to his demarch class levels, but may only target himself. The caster level of each spell-like ability is equal to the demarch's character level. It is customary for a demarch to employ both of these when praying for his daily spells.

Tenebrous Domain (Su): Upon reaching 3rd level, a demarch gains access to a bonus domain, choosing one out of the following: Avarice, City, Darkness, Envy, Greed, Luck, Shadow, Travel, Treachery, Trickery, or Wealth. The demarch gains the granted power associated with the domain he chooses, and access to the spells in that domain as domain spells.

Whispers of Intrigue (Su): As a demarch rises in experience, he plunges into the trade secrets of shadows and manipulation. At 4th level, a demarch adds the assassin and jester spell lists to his own, as divine spells. If a demarch has access to more than one divine spellcasting class, he must decide which spell list benefits from this ability. Any spell added that normally requires an arcane focus or material component instead requires a divine focus. Note that this does not otherwise affect the number of spells actually known, if applicable.

Hide in Plain Sight (Su): From 5th level onward, a demarch can use the Hide skill even when he has nothing to hide behind, or when he is being observed. To do so, he must be within 10 feet of some sort of shadow, any area of shadowy illumination in which he could hide, or in the dark. He cannot hide in his own shadow, and he can hide in the shadow of another creature only if it is at least one size category larger than he is. He cannot use a creature's own shadow to hide from it. Hiding in plain sight is a free action, but can only be performed as part of any movement.