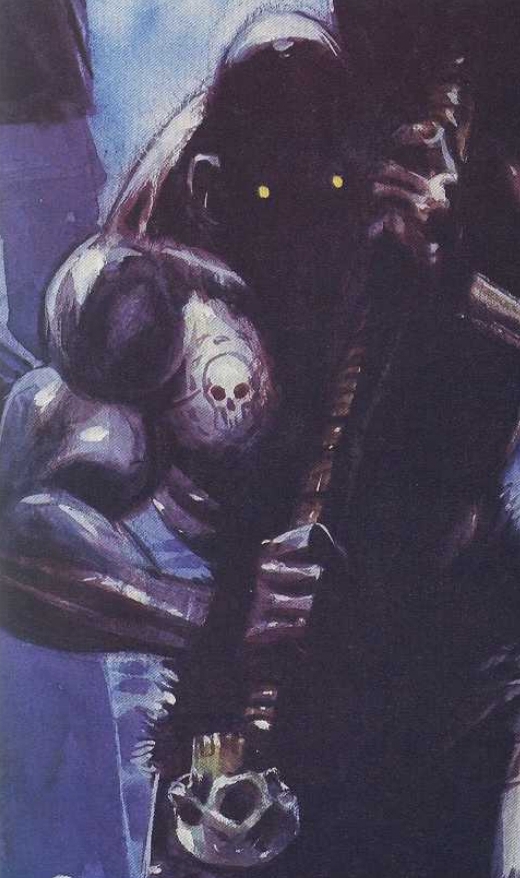 The deathstalkers were (and to a lesser extent are) the murderous servants of Bhaal, the Lord of Murder. Reduced to a scattered cult by their god's apparent death in 1358 DR and the ensuing persecution by worshippers of Cyric following the Year of Banedeath 1361, as well as the culmination of the Bhaalyn intercine war in 1367 DR, this group of priest-assassins is making a name for itself and reestablishing small temples throughout all of Faerûn.

These zealous killers are dedicated to Bhaal and exhibit all the powers they lost in the wake of the Godswar. However, while the faithful themselves have no doubt that it stems from Bhaal himself, it is unclear to many from where their power comes, as many know Bhaal to be dead. Those few aware of the cult suspect the influence of Set encroaching on the portfolio of the mad god, Cyric, while others believe the powers stem from the prince of lies himself. Still others point to recent trouble with the bhaalspawn and the whispered resurrection of the one, true Bhaal; beliefs no doubt fueled by the recent return of Bane and the meteoric rise and restoration of his church.

Deathstalkers believe that every murder committed in his name strengthens Bhaal, bringing closer his inevitable and dark rebirth. To deathstalkers and the loyal priesthood of Bhaal, murder is more than mere duty, and they are required to perform the sacrament of dealing death in the dead of night at least once in a tenday. If imprisonment or other circumstance make this impossible, they are required to murder twice for each death neglected. In accordance with the teachings of the Red Shepherd, deathstalkers strive to ensure that before they die, the murdered know who is killing them and that their death is in the name of Bhaal, intoning, "Bhaal awaits thee, Bhaal embraces thee; none escape Bhaal."

Adaptation: Although originally titled with Bhaal in mind, this prestige class doesn't have to be about the Lord of Murder. It works just as well with any murder- or assassination-focused deity that favours the shedding of blood, violent demise, and ritualized, well-reasoned killing. In a campaign taking place prior to 1358 DR, the prerequisite feat Servant of the Fallen does not apply.

To qualify to become a deathstalker, a character must fulfill all the following criteria.

All of the following are Class Features of the deathstalker prestige class.

Weapon and Armor Proficiency: Deathstalkers gain no additional proficiency with any weapon or armor.

Spells per Day/Spells Known: At first, third, and fifth level, the deathstalker gains new spells per day (and spells known, if applicable) as if he had also gained a level in whatever divine spellcasting class he belonged to before he added the prestige class. He does not, however, gain any other benefit a character of that class would have gained. This essentially means that he adds the indicated level of deathstalker to the level of whatever other divine spellcasting class the character has, then determines spells per day and spells known accordingly.

If a character had more than one divine spellcasting class before he became a deathstalker, the player must decide which class to assign each indicated level of deathstalker to for the purpose of determining divine spells per day and spells known.

Sneak Attack (Ex): At 2nd level, the deathstalker gains the ability to make sneak attacks. This is exactly like the rogue ability of the same name. The extra damage increases by +1d6 every other level (2nd and 4th). If a deathstalker gets a sneak attack bonus from another source, the bonuses on damage stacks.

Bloodlust (Sp): From 3rd level onward, a deathstalker can evoke and direct the hatred of a living creature within 60 feet. The target of this ability must succeed at a Will save (DC 16 + the deathstalker's Wisdom modifier) to resist this effect. Those that fail are affected as if by the spell rage, and must attack another creature within 30 feet of them of the deathstalker' choosing. The affected creature will do all it can to kill the target of its hatred. This effect lasts for 1 round per deathstalker level, and is a mind-affecting compulsion effect. Alternatively, as a free action, the deathstalker may cast rage as a spell-like ability, targeting only himself, with a caster level equal to his character level.

Last Breath (Su): Deathstalkers who die after attaining 5th level are affected by the last breath of Bhaal. Said to contain the power residual in their dead god's last gasp, this ability causes a deathstalker slain in the service of Bhaal to be affected as if by the spell raise dead, as cast by a 12th-level cleric. This ability takes effect hour after the deathstalker is killed, as long as the body has remained intact during that time. During that hour, the body shows no sign of life or that magic is affecting the corpse. As per raise dead, the deathstalker immediately loses 1 level. This is an often monstrous and horrifying event, as broken limbs reset, blood starts pumping out of wounds that slowly close, and twisted heads and necks turn back.