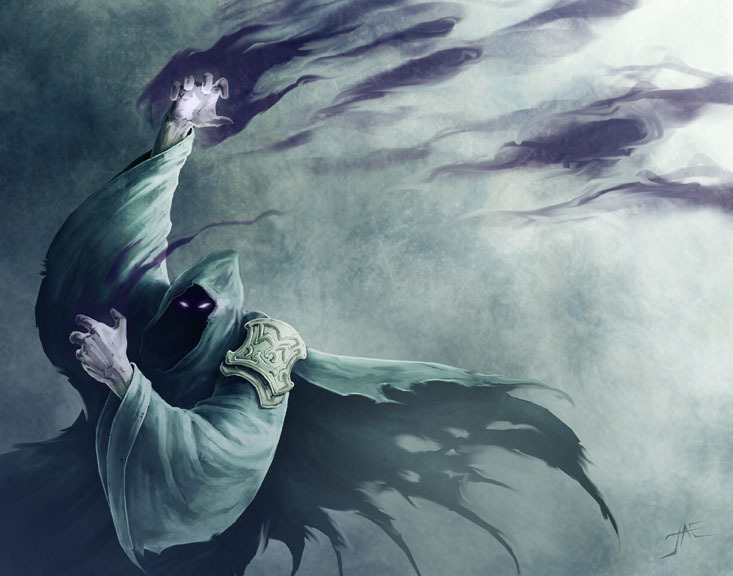 A Darkbringer summoning power for his Shade Blast ability.

Darkbringers are a caste of magicians and warriors who draw upon magic that deals with shadow, darkness, and it's next of kin. As such, they are often percieved as evil, though the class itself doesn't hold any such grudges between members.

Darkbringers bring a powerful type of magic to any adventuring group, and a small amount of martial prowess as well. However, their major abilities come from their special ability to deal out magical damage.

Races: Many races feel the draw towards the power of "Darkness". As such, the Darkbringer is a class much races capable of evil, or sinister thoughts can join, but it is also filled with good people who experiment. As such, many different races could take levels in the class.

Alignment: Darkbringers often participate in rites that one could see as opposing the law, however this does not make them pro-chaotic. Darkbringers may be of any alignment.

Darkbringers have a proficiency for spell-casting and some small amount of martial prowess. All of the following are class features of the Darkbringer.

Weapon and Armor Proficiency: Darkbringers gain Simple Weapons, and one Martial Weapon in weapon proficiency, while they have no proficiency in armor or shields. Wearing armor affects their ability to cast spells, and use their Shade Blast ability.

Spells: A Darkbringer casts arcane spells which are drawn primarily from the Darkbringer spell list. He can cast any spell he knows without preparing it ahead of time. Like other spellcasters, a Darkbringer can cast only a certain number of spells of each spell level per day. His base daily spell allotment is given on Table: The Darkbringer. In addition, he receives bonus spells per day if he has a high Intelligence score.

Shade Blast (Sp): A Darkbringer may channel darkness into a Ray attack that deals Xd6 damage, half in Cold damage, and half in Negative Energy, where X is equal to one half of the Darkbringer's class level (Minimum of 1d6). This is a ranged touch attack, and a Darkbringer can choose to convert all damage from the Shade Blast into Negative Energy damage to heal any Undead allies. Shade Blast is a Standard Action that grants iterative attacks, and any feats that effect Ray spells also effect Shade Blast. Once used, the Darkbringer must wait 1d8 rounds before using this ability again

Vision Through The Shadows: Darkbringers gain an enhanced Darkvision out to 60 feet, allowing them to see through all kinds of Darkness, including Magical Darkness

Shadow's Guidance: Darkbringers of 8th level gain the ability to cast a spell through darkness, or deeper darkness, and target any creature inside, even if they would normally be outside the effect of the spell. Artificial Light disrupts this spells ability to find it's mark, and it is ineffective in broad daylight. (Example: A Darkbringer casts Darkness in the corner of a hallway, which allows him to use Shadow's Guidance to cast any offensive spell around that corner without exposing himself to harm.))

Two-Handed Shade Blast (Su): A Darkbringer may choose to invoke a more powerful Shade Blast through using both hands in conjunction. If a Shade Blast is performed in this way, it's damage increases by one extra dice level, but requires a full-round action, and both hands free to complete. ((Example: d8 to d10s.))

Summon Shade; (Sp): At 10th level, a Darkbringer can summon 1d4 Shadows 1/day, which improves at 18th level, when he instead summons Evolved Shadows. Creatures summoned by this effect cannot create Spawn.

Dual Shade Blast (Su): At 16th level, a Darkbringer may choose to deal half damage from a Shade Blast roll to two seperate creatures. The damage of this attack is still treated as a Cold/Negative Energy hybrid in damage.

Shadow Form (Ex): At 20th level, a Darkbringer may choose to enter Shadow Form, becoming entirely composed of Shadows, and gaining one of the following benefits:

Bonus Feats: The epic Darkbringer gains a bonus feat (selected from the list of epic feats, or Metamagic feats) every 4 levels after 20th.

Feat: Improved Initiative and Dodge (If Dex is higher than 13, if not, Silent Spell or Still Spell).

Religion: Darkbringers typically seek religions who focus on the darker, shaded aspects of life. Vecna for his worship of secrets, or even Gods and Goddesses of Death like Nerull, and others.

Other Classes: Darkbringers get along well with Rogues, and Assassins. Other classes who keep to themselves, or take pleasure in a stealthy, silent approach find themselves a fond friend in the Darkbringer. However, flashier, or more bold characters like the Fighter, Wizard, Druid, or Bard clash with this class, and may often lead to disputes.

Combat: Darkbringers function well as spell-users in a group, they effectively leave enemies blind, and subject to an array of magical effects, not to mention their Shade Blast ability. They can also function as an excellent healer for a group greatly composed of Undead.

Advancement: Darkbringers who seek more magical ability might pursue a career into Necromancy, while others who wish to devote themselves to a higher power might multi-class into the Cleric ranks. A particularly bloodthirsty Darkbringer might become an Assassin, or Rogue. A Darkbringer is more likely to pursue the Arcane path of magic than the Divine, however, and armor and large weapons interfere with their spellwork, making heavier armored classes worthless prospects.

Daily Life: Darkbringers devote themselves to shadows, and the darkness of the night. As such, they often avoid going out in the middle of the day, and prefer to spend their time at night. As such, many tend to be prominent only in the local pub, or tavern, otherwise they likely spend their time perusing spellbooks, and magical objects, looking for new avenues of power.

Organizations: Darkbringers do not tend to gather just within themselves, and as such are more often found amidst a larger school of magus. They are just another group amidst Wizards, Sorcerors, and their kind. However, there is a certain kinship between Darkbringers, and Necromancers, and as such they are often seen together.

NPC Reactions: Some NPCs, who have particularly strong moral values, find Darkbringers distasteful, and shun them. However, other have no particular issue with the group as a whole, and treat them no differently than another spellcaster.

Characters with ranks in Knowledge (Arcana) can research Darkbringers to learn more about them. When a character makes a skill check, read or paraphrase the following, including information from lower DCs.

Adaptation: Darkbringers function just like other Arcane spell-casting classes, and as such are just as adaptable.

EL 6: Amerilla Nelfanten serves the Assassin's Guild of Blackstone, completing tasks and trials with relative ease thanks to her unique and powerful gifts. The party may encounter her on an assassination of a target they protect, or with her assisting their own task. When prepared, she may be found with two bodyguard assassins, both LV4 Human Fighters.

Amerilla prepares for all fights with a use of Armor of Darkness, and liberal abuse of her spells that give her the greatest advantage in combat, generally casting enemies into disarray with a quick obscuring mist or darkness before opening combat the next round with a burst of her Shade Blast ability. She engages in melee when forced to, but uses her spells per day to use hold person, Ghoul Touch, Doom, and Command to allow herself distance to pummel her enemies with Shade Blast, and uses her final 3rd level spell slot to use vampiric touch when she becomes bloodied to continue the fight.