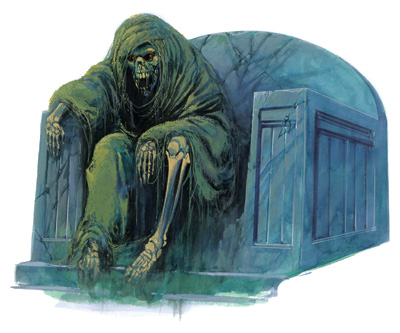 Crypt things are strange Undead Creatures that sometimes guard tombs, graves, and corpses. There are two types of crypt things --- Ancestral and Summoned. The former type are "Natural" Creatures, while the others are called into existence by a Wizard or Priest of at least 14th level. (See Create Crypt Thing Spell HERE!.

A Crypt Thing looks like nothing more than an animated skeleton, save that it is always clothed in a flowing robe of brown or black. Each eye socket is lit by a fierce, red pinpoint of light that is almost hypnotic in its intensity.

Combat: A Crypt Thing exists only to protect the bodies of those who have been laid to rest in its lair. It acts only to defend its crypt. Should Grave Robbers or vandals seek to enter and profane the sanctity of its tomb, the crypt thing becomes instantly animated.

A crypt thing's first line of defense is a powerful variety of teleportation, which it can cast once on any given group of adventurers. Each of those attacked with this spell must roll a successful saving throw vs. spell or be instantly transported away from the crypt. DMs should use the following table as a guideline, rolling 1d100 for each person who fails the saving throw, but they are free to use their own judgment as well:

Those teleported by the crypt thing cannot materialize inside solid matter, but they do not necessarily arrive at floor level. Particularly clever crypt things have been known to transport victims several hundred feet into the air or atop a vast chasm, leaving them to fall to their deaths.

Once it has employed this power, a crypt thing attacks by clawing with its skeletal hands for 1d8 points of damage.

A crypt thing can be hit only by magical weapons.

Like all undead, crypt things are immune to certain spells. It is impossible to employ a charm, hold or sleep spell against a crypt thing with any chance of success. Crypt things are harmed by holy water or holy symbols, as are many undead creatures. The magic that roots them to their lairs is so powerful, in fact, that it also eliminates any chance for priests or paladins to turn them.

Habitat/Society: Crypt Things are not a natural part of our world; they have no organized society or culture. They are found wherever tombs and crypts are located.

The most common crypt thing is the summoned variety. By use of a 7th level spell, (see Above), any caster capable of employing necromantic spells can create a crypt thing.

Ancestral crypt things are the raised spirits of the dead that have returned to guard the tomb of their descendants. This happens only in rare cases (determined by the DM).

Ecology: The Crypt Thing is not a being of this world and, thus, has no proper ecological niche. It is rumored that the powdered marrow from a crypt thing's bones can be used to create a Potion of Undead Control. In addition, anyone who employs the bones of a crypt thing to manufacture a set of pipes of hauntiing is 80% likely to create a magical item that imposes a -2 penalty to its victims' saving throws and has double normal effectiveness if the saving throws fail.