Combine Assassins are female Overwatch Elites, having the same rank and appearance. They are very agile and can move faster than most humans due to genetic enhancements. They are often sent on recon missions and, as their name suggests, assassination missions as well. 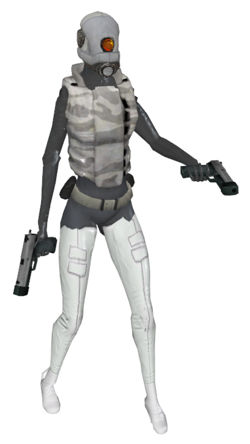 Combine Assassins are the weakest of the Overwatch soldiers in terms of health and armor class. They can be mistaken for an easy target due to their lack of pain tolerance. Do not be fooled. A Combine Assassin can dodge most attacks, get to high vantage points, and destroy even the most skilled fighters in the resistance. Their dual wield pistols can cause a surprisingly large amount of damage, and they can close a long distance quickly to strike you in melee.

If a Combine Assassin is attacked, she can make a reflex save DC the number on the opponents attack dice. If it suceeds, she takes no damage, and she may take a 5 ft step.

If an Infiltrator of 4th level or higher is exposed to any effect that normally allows a character to attempt a Reflex saving throw for half damage, the Infiltrator suffers no damage if he or she makes a successful saving throw and only half damage on a failed save. Improved evasion can only be used when wearing light armor or no armor.

An Infiltrator knows how to size up an area and get the lay of the land in a single sweep of his or her eyes. This sweep provides a +4 circumstance bonus on Spot checks and covers an area out to 30 feet away from the Infiltrator. The Infiltrator can use this bonus at the start of an encounter.

Anything not concealed can be spotted in a sweep with a successful check (DC 10). The DC for concealed or less obvious threats is equal to their Hide check result.