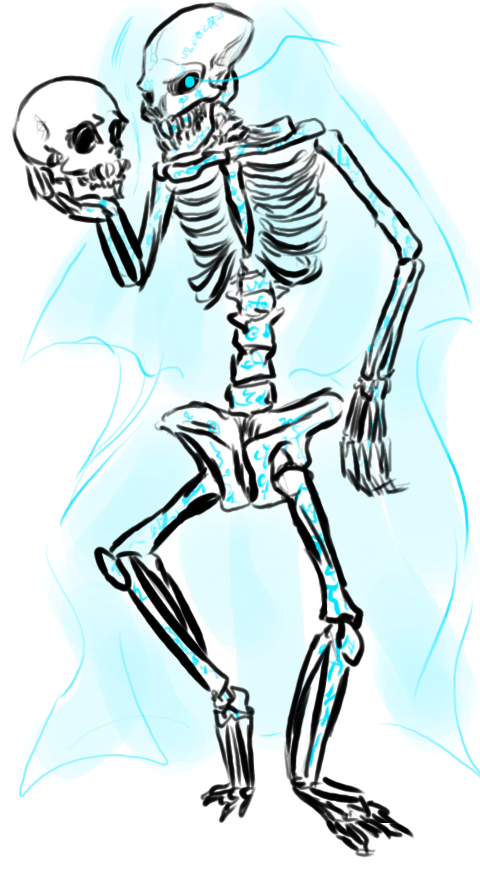 At first glance, cnámhrûh appear to be humanoid skeletons encased in a vague, transparent corporeal shell. The shell often resembles a veil of sorts that is transparent and can appear wispy and ethereal at night in the moonlight. Coming out of their bones, however, are raised runes, cryptic and often indecipherable. The veil that encases their bones, while transparent and flowy, is sometimes known to take a more humanoid shape about the bone structure, making it look like transparent flesh. Cnámhrûh lack any real flesh. The runes on their bones glow sometimes with a varying hue and this same color is present within the eye sockets of their skulls, appearing like eyes sometimes.

Within the analects of history, there were numerous ways which religions honored the dead. Etching runes into the bones was not uncommon. These remains would sometimes be burned, buried or even shipped off to sea with great ceremony. The runes were often nonsensical, even to the ones who wrote it. They did so out of tradition, not having learned what they actually do or mean. It is often in these societies that they then see what looks like the deceased walking about once more, risen from eternal slumber. They do not know what has happened or what they have done.

Runic bone-writing is a technique one can use to make reanimated skeletons. This was a popular method to make undead soldiers until simpler forms of necromancy proliferated. Necromancers no longer needed to slave away etching complex ruins. The methods then remained where they started, within primordial societies of primal peoples. They often used this method to help pacify the dead and hopefully help them pass. This method, however, also tied the soul to the remains if the spirit rejected attempts to pacify it. In this scenario, the etched runes would protrude from where they were carved, as a sign of the spirit's unwillingness to accept the peace offerings of the living. This creature then becomes like a revenant and roams the world of the living. The veil which covers them is thought to be a byproduct of the magic runes, giving the cnámhrûh a distinct shroud of death.

Cnámhrûh, while unable to rest, are not historically overwhelmingly violent or malevolent. They have free will and thought and are more often than not just apparitions that come and go on misty nights. Over the years, they have learned to carve bones on other skeletons and so multiply their numbers that way. They have a primary hub near the mouth of the Underdark, which is also known to have a smattering of other free-thinking undead inhabitants.

Cnámhrûh usually live in small, scattered covens after surviving resurrection. They form circles that mimic those of witch gatherings, often being most active at night, when they gather about a bonfire to share stories and magic. In the day, they sometimes remain on the ground, looking like an inanimate pile of bones. Others who are more adventurous have dressed in an obscuring fashion to blend in with the living. Cnámhrûh, when encountered are known to be cordial to strangers. They speak in an elderly fashion, like an old man removed from time. As undead, they are constantly wary for their own safety, as their small groups are prone to being perceived as threats by nearby towns and hunted.

A shared mentality among all the cnámhrûh is that they were bought back for no specific purpose, but by the whim and grace of a power beyond. Thus, they are always wrapped in veils of mystique, having seemingly gained knowledge or manners which they never had when alive. They are typically characterized as aloof creatures with an eye for new things, but not obsessive. When interested, they are prone to babble and inspect like curious appraisers. Knowledge is very important to the cnámhrûh, who see violence as matters of the flesh. They see other more common undead as mindless. To exhibit this to a snobbish degree, they like to talk in cryptic fashions, which usually can be understood only by others of their own community.

Cnámhrûh do not go by any special naming system, but rather simplicity. They often resurrect with a name in mind, as though something named them upon rebirth. This name is their new identity which they use.

Skeletons imbued with the runes of necromancy
Ability Score Increase. Your Wisdom score increases by 2, and either your Dexterity or Constitution score increases by 1.
Age. Cnámhrûh do not age and cannot die of age after their resurrection. At the end of their life, however, they suddenly drop dead, as their life energy which was granted to them has been used up. Cnámhrûh have been known to live to 600 years.
Alignment. Cnámhrûh are usually of neutral or chaotic alignments, given their free will.
Size. Cnámhrûh are resurrected having lost all their flesh, and so a good portion of their original size is sheared down. Your size is Medium.
Speed. Your base walking speed is 30 feet.
Darkvision. You can see in dim light within 60 feet of you as if it were bright light, and in darkness as if it were dim light. You can't discern color in darkness, only shades of gray.
Mouthpiece. You are a being reborn from the realm of dead, gifted with the ability to communicate with the beyond. You may expend an action to attune the energies of the divine will which crossed the boundaries and life and death to bring you back. For one minute, you are considered under the effects of the speak with dead spell. You must complete a long rest before using this trait again.
Runic Glow. You are covered in runes that pulsate light and also have eyes that are luminous. Using an action, you can intensify their glare and shine a soft bright light out from you for 10 feet and an additional 10 feet of dim light beyond that. You may dispel this light as a bonus action.
Collapse. You may, as an action, collapse your form into a pile of bones. While you remain motionless, you are indistinguishable from a normal pile of bones. In this state, you are prone, your speed is 0, and the only action you can take is to revert to your normal state. You are still fully aware of your surroundings in this state.
Skeletal Nature. You do not need to eat, drink or breathe. Instead of sleeping, you enter an inactive state for 4 hours each day. You do not dream in this state; you are fully aware of your surroundings and notice approaching enemies and other events as normal. Your creature type is undead.
Anti-Magic Susceptibility. You are animated by divine necromancy magic, which can be severed from you. You are incapacitated while in the area of an antimagic field or similar effect. If targeted by dispel magic, you must succeed on a Constitution saving throw against the caster's spell save DC or fall unconscious for 1 minute.
Languages. You speak, read and write Common and one other language of your choice. This is normally one linked to your previous life.