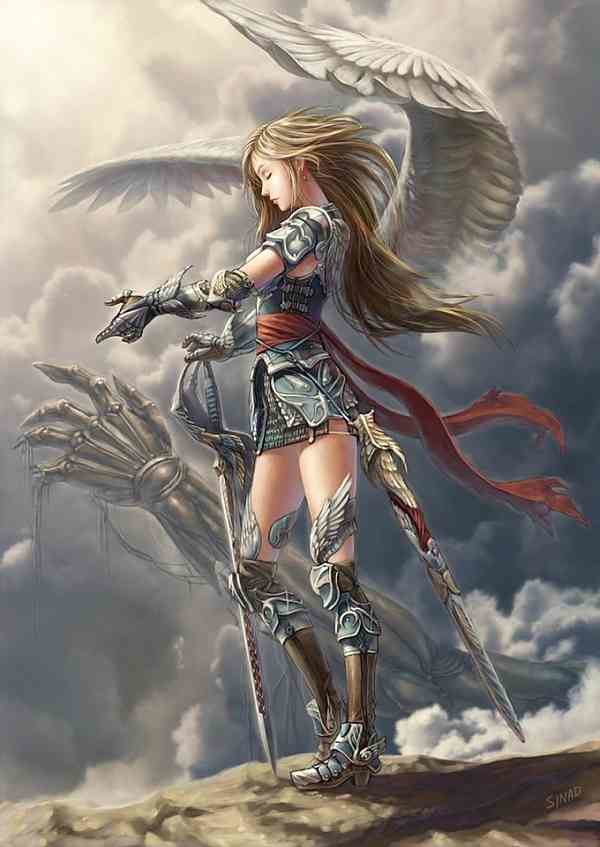 Celestial Disciples are warriors blindly devoted to their faith. They seek to enlighten others to walk the same path to divinity, and bring wrath down on those that seek to denounce and slander the faithful.

Celestial Disciple's Creed varies by faith. Disciples of Tyr and Pelor seek out and bring evil-doers to justice where a Disciple of Moradin or Bahamut may be take up arms protecting a city. Paladins and Clerics make excellent Celestial Disciples and Fighters who multiclass to follow this path are not unheard of.

All of the following are class features of the Celestial Disciple.

Natural Armor: At 1st level, a Celestial Disciple's skin toughens, giving her a natural armor bonus of +1. This bonus increases by +1 at every odd level thereafter.

Ability Boost: As her body takes on the attributes of an outsider, a Celestial Disciple gains stat boosts that strengthen her beyond that of an average mortal. At 2nd level, a Disciple gains +2 to Str; at 4th, +2 to Con; at 6th, +2 to Wis and Int; at 8th, +2 to Cha and at 10th, +4 to Wis and Cha.

Holy Fire (Su): At 3rd level, the Celestial Disciple gains the ability to change divine spell energy into Holy Fire, manifesting it as a bolt of raw magical energy. To do so, she must sacrifice one of her prepared spells for the day. The result is a ranged touch attack with long range (400 feet + 40 feet/level of Celestial Disciple) that deals 1d4 points of damage per 2 class levels of the Celestial Disciple plus an additional 1d4 points of damage per level of the spell used to create the effect. If Holy Fire is cast against a creature that is Undead or any Evil Outsider, it deals double the amount of damage.

Wings: As her body nears transformation into a half celestial, a Disciple grows a pair of angelic wings, granting her a fly speed double to her normal land speed, with good maneuverability.

Celestial Being: Upon reaching 10th level, a Celestial Disciple completes her transformation into a half celesial, infusing herself with the power of her deity. She gains the half celestial template.

Religion: Celestial disciple do not exactly need devote themselves to a single deity, just like clerics and paladins do not have the need to do so. Devotion to righteousness is enough for most. Those who align themselves with particular religions prefer Pelor, god of light, over all others, but some paladins follow Tyr, god of justice. Nevertheless, Ceslestial disciple devoted to a god are scrupulous in observing religious duties and are welcome in every associated temple.

Advancement: Divine classes work well with this class, specifically martial oriented ones. Monks also enjoy this class, having good saves and a high BAB which they can certainly use.

Combat: A Celestial Disciple is at home on the front lines of combat, lashing out at her foes with spell or sword, or defending and healing her allies as need be.

Celestial Disciples' in the World[edit]

Combat: A Celestial Disciple is at home on the front lines of combat, lashing out at her foes with spell or sword, or defending and healing her allies as need be.

Everyday Life: Celestial Disciples can be found all over the world, and as stated before serve a myriad of purposes. Many act as champions of monotheistic cities or emissaries for temples on missionary trips.

NPC Reactions: Depending on the deity of their choice, a Disciple may be met with utmost respect, seething rage, or even fear.

Celestial Disciples in the Game[edit]

Celestial Disciples may play the part of saint or healer, a blessed person the PCs may have to protect, or a friendly and wise mentor who has seen it all.

Adaptation: Many abilities can be swapped out for their evil equals, making a Fiendish Disciple.

Sample Encounter: Lemegeton, the wise head priest at the church, is being targeted by devils due to some recent and very dangerous truenames he acquired. Save Lemegeton and get the

important data from him successfully.