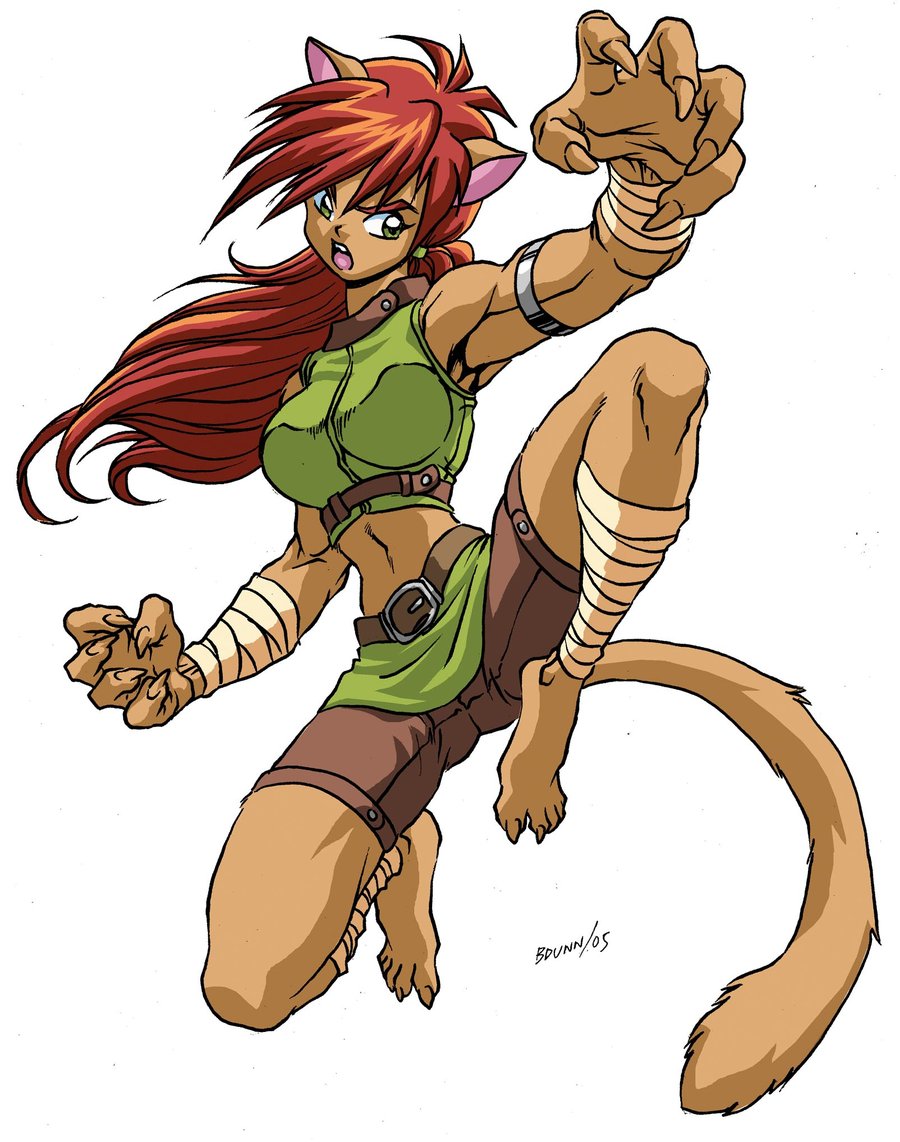 Catian are optimists in all respects. They take life as it comes, usually with much laughter and merriment, and never look to the future, past, or indeed the present. This outlook sometimes does more bad than good, but Catian are quick to make amends, and even quicker to forgive themselves. In battle they are quick and lively, leaving their enemies confused and bewildered as to what they will do next, utilizing there agility to their benefit.

Catian are short and muscular, but without the weight and ungainliness of dwarves or the slimness and beauty of elves. They stand 4½ to 5 feet tall, sometimes a bit more, and weigh around 85 pounds. They have definite cat features: a short muzzle, whiskers, vertical pupils, a long, graceful tail, and legs shaped like those of big cats; however they walk upright. Their skin is mostly covered in a coat of soft fur of any soft color, and their eyes are usually green, yellow or brown. Catian have hair like a human but they tend to keep it short. This is not a strict rule however, and their ears are those of a cat. Their arms are human, but furred less and less going down until their hands are furless.

Catian get along well with members of just about every other race. They admire those who live in the wild more than city dwellers. Because of this, they seek out the company of halflings, wood elves, and gnolls. Catian have a hard time understanding the slow, steady approach that dwarves take to life, and the two races have little in common. Because they are such opposites in both temperament and physical abilities, Catian and dwarves rarely enjoy the other’s company, although no real animosity exists between the races. Catians also believe in a communal family more than the common family structure. Children are raised by all the members of the community. Marriages are rare due to their urges towards adventure and exploration, but not unheard of.

Usually Chaotic Neutral. Naturally, Catian are almost always chaotic. Some do settle down for the quieter life but the road is always the Catian’s home. Most lean towards neutral on the other axis, having no interest in the affairs of state and the people in the lands they travel through, but some have a cruel streak, resulting in evil alignments. Some also lean towards good alignment since working with other adventures can lead to untold adventures.

Catian roam the open grasslands in temperate and tropical regions, shunning the colder lands even in the heights of summer. Wandering tribes of Catian rarely come close to the large cities of other races, but they occasionally camp within sight of a smaller town or village in order to trade. Catian roam great distances in their travels and do not become attached to a specific range or territory the way that nomadic tribes of humans sometimes do.

Catian have their own language, which they use primarily for conversation with other members of their race. Regardless of whether they communicate in Feline, Common, or some other language, Catian express their opinions quickly and expect others to do the same. Catian can listen to others patiently enough, but once they have expressed a clear opinion, they expect the conversation to come to a conclusion quickly. They have little time for those who attempt to persuade or debate by simply restating their opinion. They grow bored when others take a long time to reach a point or who view an exchange of opinions as a trial of endurance.

Catian name their children in Feline, which is impossible to transcribe into Common. However upon reaching his 9th birthday a Catian child may give himself a name in any language he desires, so there is no preset system for naming.

Adventuring Catian feel the restlessness common to their people more acutely than most. The thrill of discovery and a great sense of curiosity drive these adventurers to break from their tribes and wander other lands. Beyond simple wanderlust, some Catian find the heat of combat exhilarating, and the rush of danger draws the Catian adventurer ever onward. Catian admire adventurers and see accomplished adventurers as great assets to the tribe. The nomadic life of the Catian is fraught with danger and unexpected encounters, and the life of the typical Catian is more akin to that of an adventurer than the life of a typical human or elf.

Due to their adventuring natures, Catian tend to choose their mates based on those they meet on their adventures. With their feline nature, Catian can mate with most felines of medium to large size as well as most humanoids of small to large size. Regardless of what races or species they chose to mate with, Catian genetics remain dominate. Any offspring of a Catian will always be Catian. Due to this reason, most races tend to avoid mating with Catian. Catian pregnancies last for three months and roll a d% to determine the number of children. 01-05 for Four Children, 6-25 forSingle Child, 26-85 for Two Children, 86-99 for Three Children,and 00 for Five Children. Each child has a 60% chance to be female rolled separately. Every year starting after their 14th Birthday, Catian begin to go into heat every summer. They feel an almost uncontrollable urge to mate. These urges last until they have mated or until the end of the season. Due to these urges, Catian become much more gullible when dealing with members of the opposite gender. During this time, most Catian without a mate already selected, tend to avoid populated areas.

Catians in-character typically exhibit cat-like attitude, and may sometimes include cat gestures or sounds in communications. Thus, appropriate use of such will enrich the characterization of a Catian.
Vocalizations